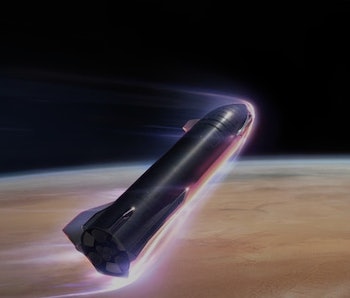 SpaceX ends a big 2019 in spaceflight; Crew Dragon animation hints at the future; and the Starship is set to fly in just three months. Back from the holidays, it’s Musk Reads: SpaceX Edition #132.

Starship is set to fly in “2 to 3 months,” Musk claimed last week. The company has yet to fly a full-scale version of the vehicle designed to send humans to Mars and beyond after unveiling the Mk 1 version at a September event. Musk explained that the company is now working on the flight design for “SN1,” with each “SN” version offering minor improvements until around the 20th iteration. A successful flight of the full-size machine would set SpaceX up well to fly Japanese billionaire Yusaku Maezawa with six to eight artists around the moon, a trip currently scheduled for 2023.

In another SpaceX mission, the Dragon capsule was photographed on its penultimate trip with a solar eclipse in the background. The CRS-19 mission lifted off on December 5 with around 6,000 pounds of cargo. Pictures released by the International Space Station showed the craft orbiting the Earth, attached to the station, with the moon’s shadow cast over Malaysia. It’s expected to return to Earth on January 7.

The capsule’s first mission was in December 2010, and its final mission is expected in the first half of this year. Musk reflected on the end of this era via Twitter:

“Hard to believe it’s almost time to retire Cargo Dragon after a decade of solid service.”

What’s next for SpaceX: SpaceX is expected to launch its third batch of Starlink satellites at 9:19 p.m. Eastern time on January 6 from SLC-40 at the Cape Canaveral Air Force Station in Florida. This will be the company’s first launch of the year. This next batch will test a non-reflective coating aimed at reducing the constellation’s impact on astronomical observations. The static fire was completed on January 4. Read more.

SpaceX: A year in review

Another year, another series of launches comes to a close. YouTube user “STARSNOO” put together a big compilation video running down the year in review. How did SpaceX do? Its 13 launches were eight down from last year, but its 15 booster landings placed it joint first with 2017. Watch out for the Crew Dragon pad explosion, the first Falcon Heavy commercial flight (complete with synchronized booster landings!), and the first set of Starlink launches. Read more.

Perhaps the most notable result of 2019 is that booster landings are practically commonplace at this stage. Could Starship, with its plans to support up to 1,000 launches per vehicle per year, take this to all-new levels?

SpaceX demonstrated another area of innovation set for 2020 with its latest video. The animation shows the first humans entering the Crew Dragon capsule and launching into space, a feat expected for the first quarter of this year. The three-minute clip draws on a number of Musk innovations, including the Tesla Model X that’s been used in test procedures to transfer astronauts. Musk claimed last week that the capsule should be “physically ready” in February, with final safety reviews taking a few more months. Read more.

Thanks for reading this edition of Musk Reads! If you enjoyed, consider sharing it with a friend using the link below.

More like this
Innovation
6.15.2022 9:00 PM
Vulcan vs. Atlas V: What you need to know about the ULA's next mega-rocket
By Harry Stoltz
Science
6.27.2022 8:45 PM
NASA found the crash site of the rocket booster that hit the Moon in March
By Kiona Smith
Innovation
4 hours ago
Can cars run on water? The science of a TikTok conspiracy theory, explained
By Andrew Moseman
Related Tags
Share: