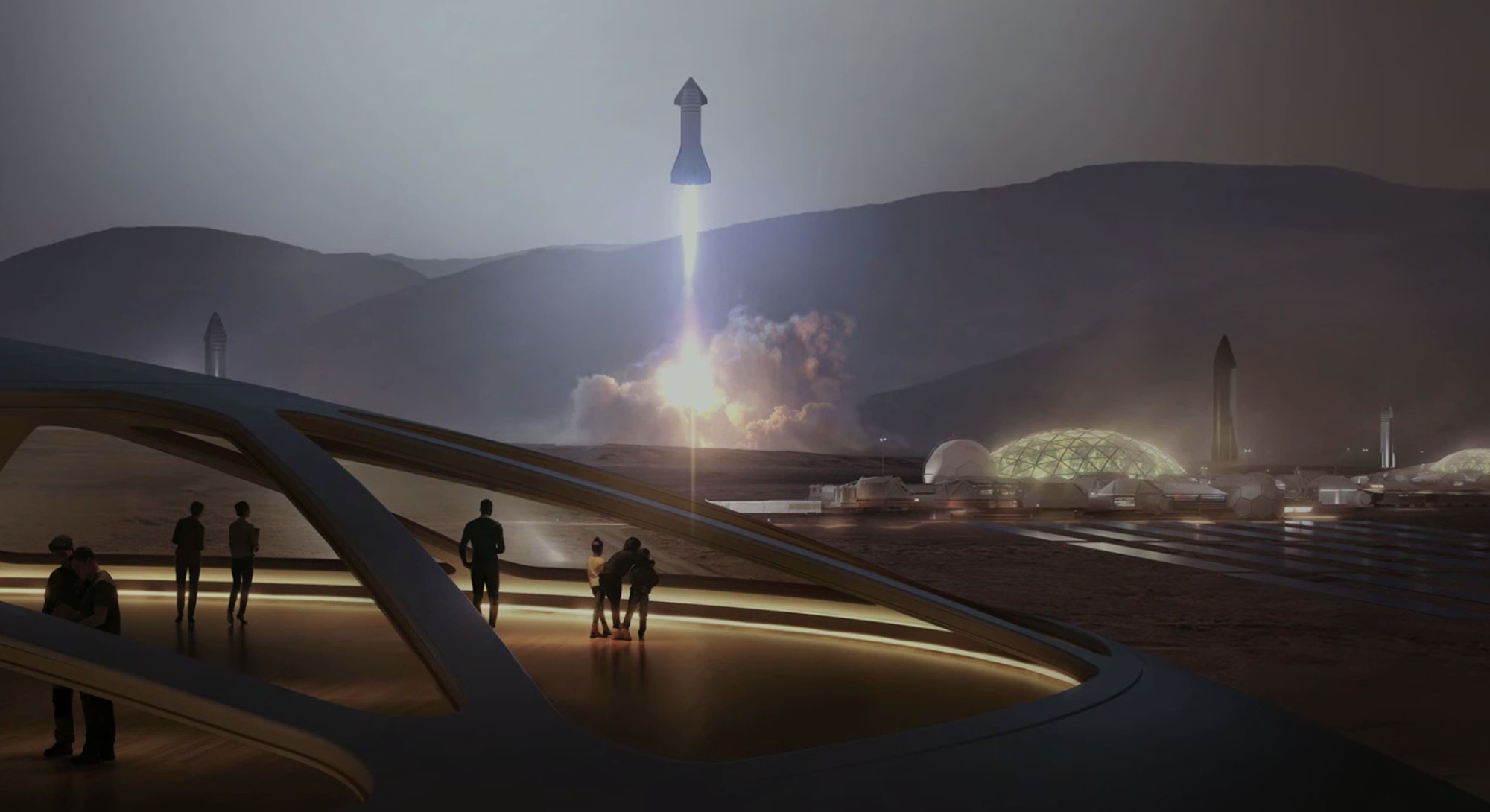 On a windy night at the Boca Chica launch facility in Texas, SpaceX CEO Elon Musk stood next to the Starship Mk.1, a 164-foot prototype of the ship designed to transport humans to Mars and beyond.

Saturday’s presentation, held on the 11-year anniversary of SpaceX’s first flight to orbit, marked the end of a several-month construction period. Although an impressive feat, SpaceX is not planning to stand still. An orbital flight is expected in the coming months, with manned flights potentially launching soon after.

At Tesla, Musk has dedicated the company to fighting climate change by offering renewable energy solutions and cleaner transportation options. Starship, by Musk’s own admission, is less about solving an imminent problem and more about charting a course for the future of humanity. It’s a position that’s drawn skepticism from the likes of Jack Ma, who would rather focus on Earth’s problems.

“We are faced with a choice,” Musk said. “Which future do you want? Do you want the future where we become a space-faring civilization and are in many worlds, and are out there among the stars? Or one where we are forever confined to Earth? And I say it is the first.”

Although Musk at times struggled to make himself heard over the wind, the message was clear: Starship is the vessel that could expand humanity out from the Earth and into the solar system.

Musk reiterated that a fully-reusable design like the Starship is necessary to send humans to other planets. It allows the ship to land, refuel on the planet using readily-available resources, and even potentially fly out further by establishing a network of propellant depots along the way.

28. The Raptor has a unique movement design

In an aircraft, the engines are static and you move by tilting the rudders and other components. With the Starship, you move the entire engine to steer. The three sea-level engines will move up to 15 degrees, while the three vacuum engines will remain stationary. On the booster, seven of the engines move and the rest are stationary.

SpaceX previously tested the shields on a Crew Dragon mission:

26. The steel is way cheaper than carbon fiber

25. The Super Heavy can hold up to 37 Raptor engines

The Super Heavy booster can handle a variety of Raptor configurations. The minimum is around 24, but this can reach up to 37. Musk recommended 31 is probably ideal. Combined with the Starship, the entire design could hold up to 43 engines.

SpaceX’s missions to the International Space Station are harder than refueling in orbit, Musk claimed. Starship can get to orbit for 150 tons of orbit for payload to Mars, but in-orbit refueling is critical to the more ambitious missions.

22. An Antarctica-like base on the moon could come soon

Musk declared that a base on the moon would be ideal, akin to research bases in Antarctica used by scientists to conduct experiments.

21. Trips to Saturn are within reach

20. A self-sustaining city on Mars is the main goal

A new concept image showed the potential for a Starship-powered city on Mars, complete with habitats. Musk described it as “the fundamental thing.” SpaceX has previously claimed it could build a city on Mars by 2050.

“The fastest way to increase defense funding would be to be like ‘hey look, we found an alien,’” Musk said, pouring cold water on the conspiracy theories surrounding the Area 51 base and an alien cover-up.

18. …so we need to protect the galaxy’s consciousness

“As far as we know, this is the only place, at least in this part of the galaxy or in the Milky Way where there’s consciousness,” Musk said. He warned that there’s probably only around several hundred million years left before the Sun expands enough to destroy humans on Earth, and we should “take whatever steps” possible to preserve life.

17. A 20-kilometer flight with Mk.1 should come in one or two months

Musk has previously suggested the Mk.1 could fly in October.

16. The next flight might be an orbital flight with the booster and ship

Musk suggested the Mk.3 prototype, which will start production in around a month at Boca Chica, could support this future mission. The Mk.4 or Mk.5 may also prove better candidates.

15. Florida and Texas will build both ships and boosters

Musk claimed “a whole stack of them” should emerge soon, as they will be building “as fast as we can.”

The main constraint is engines, so spooling up Raptor production will be key to this.

13. SpaceX aims to make one Raptor every day by the first quarter of 2020

The firm currently produces a new engine every eight to 10 days.

12. A second prototype should arrive in one or two months, a third in three months, and a fourth in four or five months

The rate of production should be “quite crazy by space standards,” Musk said.

11. An orbital flight could take place within six months

Musk claimed this was “accurate to within a few months.”

10. Mk.3 should be thinner, lighter and cheaper

SpaceX plans to take steel coils directly from the mill and change the curvature to the nine-meter diameter, reducing production times. The production is expected to improve “exponentially.”

9. The first crewed Starship mission could leave from Boca Chica

Musk says the company is “internally competing” the Texas site and Cape Canaveral, but both places should launch crewed missions. There is a 50 percent chance that SpaceX chooses the Texas site.

8. Starship was built with less than five percent of SpaceX’s personnel

The rest of the team maintained its focus on the Dragon capsules and Falcon rockets.

7. Boca Chica is going to look a lot nicer

The current iteration was a short term construction to support the Starship prototype production, but Musk expects “a lot more buildings and a lot more stuff” when it’s flying crew in 10 years.

Musk explained that the long-term goal will be to extract carbon dioxide from the atmosphere and use electricity to produce new fuel. The same technique used on Mars could power Boca Chica flights.

5. A 100-person flight is still a possibility

The Starship will offer 1,000 cubic meters of cabin pressurized space, similar to the International Space Station. Musk noted that this is roomier than it would be on Earth as you’re not limited to one surface. Musk previously likened the internal cabin size to that of an Airbus A380.

4. People could fly on the Starship by next year

“If we get to orbit in about six months…we can do 10 flights basically within 10 days,” Musk said. The reusability factor could prove person-readiness far faster than a traditional rocket.

3. ‘Undesigning’ is the best design

“Just delete it, that’s the best thing,” Musk said, describing how removing a part is better than maintaining one to add complexity.

2. Teslas will work on Mars

“You can just drive them, pretty much,” Musk claimed, contrasting the electric cars with an internal combustion engine. No word on whether the higher radiation levels may cause any problems.

1. Sending a boring machine to the moon and Mars might be a good idea

Musk hinted that sending one of The Boring Company’s machines could help extract materials and produce building resources.

With a city on Mars by 2050 the main goal, sending a boring machine and a Tesla to the red planet may prove less critical.