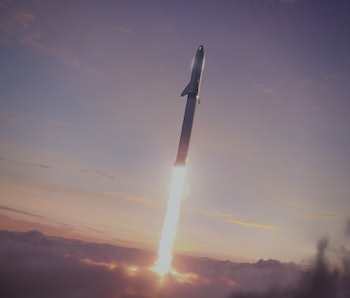 Elon Musk, CEO of the space-faring firm, hinted at the long-term plan on Twitter Sunday during a discussion about SpaceX’s planned September 28 event. Although primarily focused on the Starship, the stainless steel rocket designed to send the first humans to Mars, Musk suggested the presentation could reveal more about making spaceflight more eco-friendly.

“[What] about carbon-capture-for-rocket-fuel that you hinted at before?” a Twitter user called “Robotbeat” asked Musk. “I’ve always been interested in the ISRU side.”

“Sure,” Musk wrote in response. “Have to do it on Mars from [the] beginning. Will ultimately do that on Earth too, so rocket flights will be zero net carbon long-term.”

As SpaceX is also planning to offer trips to major cities in under an hour with the rocket, it’s perhaps a welcome commitment.

But far from an ideal target that could make SpaceX more eco-friendly, reaching zero carbon is practically a necessity to reach the company’s bigger long-term goals. This includes sending and returning humans to Mars, establishing rocket fuel depots outside of Earth, and kickstarting a multi-planetary species. Going zero-carbon for spaceflight could be one of the key breakthroughs that enables SpaceX to achieve its ambitious goal of a city on Mars by 2050.

Zero-carbon spaceflight: How Musk wants to reach this goal

SpaceX wants to send humans to Mars. To bring them home, it will probably also need a means of capturing carbon to create fuel. This process of using resources found at the exploration point is known in the space sector as in-situ resource utilization, or ISRU.

The company is currently building a Starship orbital prototype in Texas. Like the final model, this machine is powered by Raptor engines that burn liquid oxygen and methane to propel itself. That’s a marked change from the rocket propellant used in the Merlin engines that power the Falcon 9.

SpaceX’s plan is to use these Raptor engines, plus the Starship’s fully-reusable design, to enable a return trip to Earth. The first humans will be tasked with establishing a propellant depot on Mars. This depot will make the liquid oxygen and methane to refuel the engines.

“Mars has a CO2 atmosphere and plenty of water ice,” Musk explained at the International Astronautical Congress in Adelaide, Australia, in September 2017. “That gives you CO2 and H2O, so you can make CH4 and O2 using the Sabatier process.”

Musk previously detailed this idea one year prior, showing the equation that could make this fuel:

The Sabatier process, mentioned above and used by NASA on the International Space Station, uses a catalyst to react with carbon dioxide and hydrogen. The end result is water and methane.

“Long-term, this can also be done on Earth,” Musk said at the September 2017 presentation. “Sometimes I get criticism for, ‘why are you using combustion in rockets and you have electric cars’. There isn’t some way to make an electric rocket. I wish there was. But in the long-term, you can use solar power to extract CO2 from the atmosphere, combine it with water, and produce fuel and oxygen for the rocket.”

SpaceX has been hard at work perfecting this system. In October 2017 Musk wrote the design “is pretty far along…it’s a key part of the whole system.” In June 2018 Musk noted that the company “is already developing high efficiency CO2 capture with H2O to form liquid CH4 (methane) & O2.”

Musk has set himself a high target, aiming to capture carbon and push rocket launches in a more environmentally-friendly direction. But with the Mars city project projected to cost up to $10 trillion and potentially causing humans to evolve in unexpected ways, it’s perhaps not the most radical aspect of SpaceX’s overall plan.