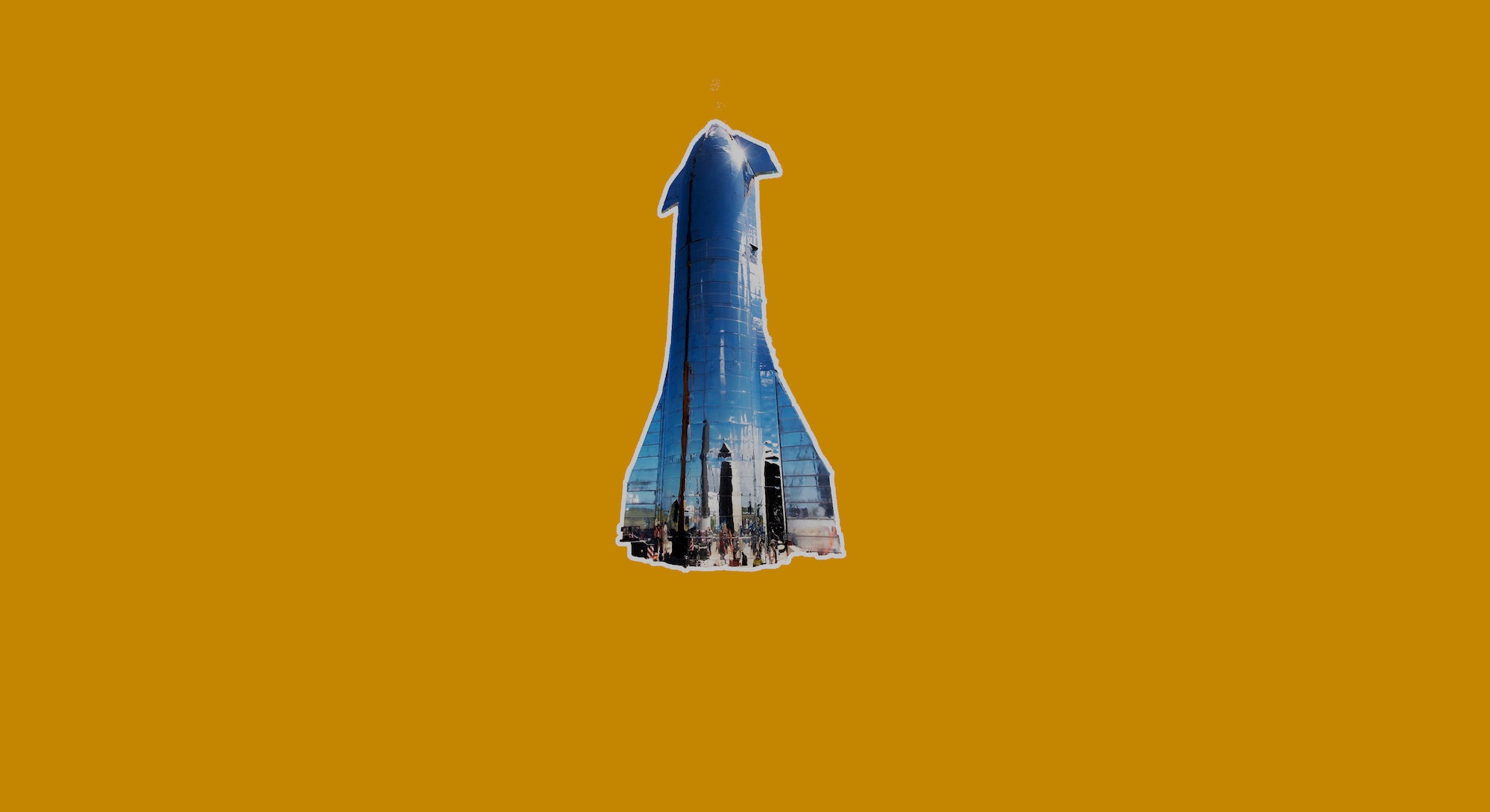 On Saturday night, September 28, 2019, SpaceX CEO Elon Musk will update the public on the development of its Starship and Super Heavy launch vehicle, which the company says is “a fully, rapidly reusable transportation system designed to carry both crew and cargo to Earth orbit, the Moon, Mars, and anywhere else in the solar system.”

But how did we get here?

Recent history — though SpaceX, founded in 2002, has always been working toward this — will take you back to three years ago, almost to the day.

In late September 2016, Musk made some actually breathtaking predictions about an “interplanetary transport system” during the International Astronautical Congress in Guadalajara, Mexico. A year later, in September 2017, Musk offered more details on the project, also during the IAC, which was in Adelaide, Australia.

Then, in September 2018, Musk revealed the person who would be the first passenger in his Starship, Japanese billionaire Yusaku Maezawa.

And tonight, from the its launch facility in Cameron County, Texas, Musk will predict where SpaceX going next. The SpaceX livestream link is at the bottom of this story, and the 2019 SpaceX presentation starts at 7 p.m. Central time.

Get up to speed quickly on how this strange journey about the future of humans venturing into our solar system came to be.

On September 27, 2016, Musk gave a keynote at the International Astronautical Congress in Guadalajara, titled “Making Humans a Multiplanetary Species,” which laid out his grand plan for sending humans to Mars and beyond.

Before the presentation, SpaceX built hype by sharing this inspirational video of the first Mars colonists that imagines humans walking across a sky bridge from a silo and into a spacecraft attached to a SpaceX rocket booster.

Musk also wondered then how SpaceX might pay for the project, saying “obviously it’s going to be a challenge to fund this whole endeavor,” adding that putting satellites into orbit and contracts with NASA would help. There was no mention of Starlink, the plan for a constellation of internet satellites, though. Nor was there any talk of reusable starships. Watch below:

He also predicted how much a trip to Mars might cost — you might just have to sell your house. “If we can get the cost of moving to Mars to the cost of a median house price in the U.S., which is around $200,000, then I think the probability of establishing a self-sustaining civilization is very high,” Musk said, noting that each ship would carry about 100 people to Mars. Eventually, 200 people could make the trip.

Musk also said the rocket booster might be able to carry people and goods from New York City to Tokyo in thirty minutes. It was an idea Musk was still talking about as recently as June of this year, though he admitted the trip might feel like a ride on Space Mountain, the famous rollercoaster at Disney World.

Here’s how Musk said SpaceX might one day go beyond Mars — Jupiter?!? — in that 2016 presentation:

In a memorable Q&A with attendees at that 2016 conference, Musk also explained why SpaceX only hires Americans: “I think people are a bit confused about this; unfortunately, this is not up to us,” Musk said. “U.S. Government regulations make getting a job in the U.S. hard enough as it, but if but if you’re working on rocket technology, that’s considered an advanced weapons technology, so even a normal work visa isn’t sufficient unless you get a special permission from the Secretary of Defense or the Secretary of State. So I want to be clear, this is not out of some desire of SpaceX to just hire people with green cards.” Below is that exchange:

Musk also clarified at the 2016 event if he would actually go to Mars himself: “I would definitely like to go to orbit and visit space station and ultimately go to Mars. I’ve got to make sure that if something goes wrong on the flight and if I die that there’s a good succession plan and that [SpaceX] doesn’t somehow get taken over by investors who just want to maximize the profit of the company not go to Mars. That would be my biggest fear in that situation.”

Finally, he addressed how those Mars colonists might return to Earth — by producing methane on Mars as rocket fuel for the return trip.

On September 29, 2017 at the IAC in Australia, Musk updated the public on a crucial aspect of his plan to make humans a multi-planetary species: how to pay for it. The key, he said then, was redesigning SpaceX’s rocket system to make it more effective for work in Earth’s orbit.

“We now think we have a way to do it,” Musk explained. “Which is to have a smaller vehicle, still pretty big, but one that can do everything that’s needed in the greater Earth orbit activity. Essentially, we want to make our current vehicles redundant. We want to have one booster and ship that replaces Falcon 9, Falcon Heavy, and Dragon.”

That reusable vehicle was the BFR, which was later renamed to the Super Heavy launch vehicle, which will launch the human-carrying Starship.

“It’s really crazy we’re building these sophisticated rockets and then crash them every time they fly,” Musk said. “This is mad! I can’t emphasize how profound this is and how important reusability is.”

Musk also built on an idea from 2016 about using SpaceX rockets to ferry humans between points on Earth.

The rocket would see its first uncrewed missions in in five years, he said. “That [2022] is not a typo … although it is aspirational.”

Also in 2017, he laid out the order for the first several missions to Mars. It would begin with two uncrewed cargo runs in 2022, which would set up four more missions in 2024, two of which would be crewed. Musk revealed the specific purposes for these early Mars missions: the first crewed mission to Mars would be to find water and the second would be to build a propellant plant.

And because this was an Elon Musk presentation, there was at least one nod to sci-fi: He said the powerful resuable rocket system would make it possible to build a moon base. The name he picked was an homage to the British cult classic Space: 1999.

On September 17, 2018, Musk revealed that Yusaku Maezawa would be the first private astronaut aboard the BFR — later renamed Starship — during an event at SpaceX headquarters in Hawthorne, California.

The trip would be to the moon and back, over the course of four to five days. The trip was announced for 2023 and will be called “Dear Moon.” The video below shows how Maezawa envisions it:

Who is Maezawa? The Japanese billionaire is a lover of art and founded the online custom clothing retailer ZOZO.

“In 2023, as the host, I would like to invite six to eight artists from around the world to join me on this mission to the Moon,” said Maezawa during the presentation.

Musk explained then that “BFR is really intended as an interplanetary transport system that’s capable of getting from Earth to anywhere in the solar system as you establish propellant depots along the way.”

Those final destinations could cover “Mars, Moon, maybe Venus, the moons of Jupiter, throughout the Solar System.”

One note — it’s unclear if Musk will speak at the 2019 International Astronautical Congress, which is October 21-25 in Washington, D.C. (He did not speak at the 2018 edition.)

So, what’s next? Watch the 2019 SpaceX Starship update on the SpaceX live stream at 7 p.m. Central time:

Sign up for Musk Reads, the twice-weekly newsletter with essential news from the world of Elon Musk, including SpaceX, Tesla, the Boring Company, Neuralink, and more.