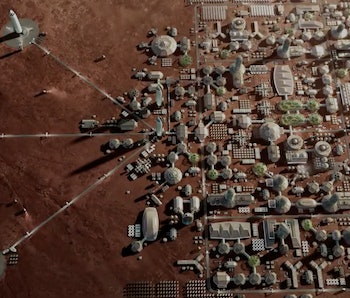 “That’s not a typo,” SpaceX founder Elon Musk said Friday at the International Astronautical Congress as the date for the company’s first Mars missions flashed up on the big screen. “Although it is aspirational.”

The date in question is 2022, just five short years from now. That’s the target Musk has set for himself and SpaceX to build the first two cargo ships to reach Mars. According to his presentation at this year’s IAC in Adelaide, Australia, the plan is to start building the first of these next-generation rockets in mid-2018.

“I feel fairly confident that we can complete the ship and prepare the ship for launch in about five years,” he said. “Five years feels like a long time to me.”

These two uncrewed cargo runs in 2022 would set up four more missions in 2024, two of which would be crewed. Musk revealed the specific purposes for these early Mars missions.

“The goal of these initial missions is to find the best source of water,” he said. “That’s the first mission. The second mission is to build the propellant plant.”

This plant would be a massive rocket refueling station, one in which Martian water, ice, and carbon dioxide can be recombined to create methane and liquid oxygen, the twin propellants needed for the rockets to return to Earth for their next use.

The early, uncrewed missions would deliver the raw materials needed to build the propellant plant, including all the solar panels needed to power it and the life support needed to keep the astronauts alive.

2022 and 2024 are important dates for SpaceX to hit because they would let the company make those years Earth-Mars rendezvous — points at which the planets are close enough together in their respective orbits to facilitate an economical journey between the worlds.

From there, Musk indicated the plan would be to start gradually building Mars City and terraforming the planet, “making it really a nice place to be.”