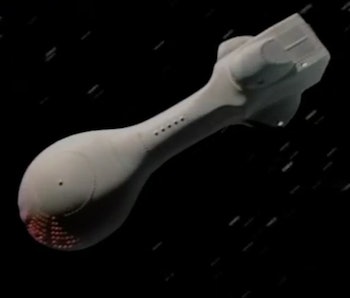 The name of the first Mars-bound SpaceX craft will be named The Heart of Gold, in honor of the spaceship commandeered by Zaphod Beeblebrox in Douglas Adams’s mega-famous science fiction novel The Hitchhiker’s Guide to the Galaxy.

During a question-and-answer session after his keynote speech at the 67th International Astronautical Congress in Guadalajara, Mexico, Musk revealed his desire to name at least one SpaceX ship The Heart of Gold.

“We’re thinking about names. The names thing is really hard,” Musk said, “And the name of the first ship that goes to Mars not the name of the whole ship line necessarily but the first ship that goes to Mars … my current favorite is Heart of Gold.” Mirroring the sense of whimsical humor from the novel, Musk emphasized he liked the idea of the name because “it’s driven by infinite improbability because I think our ship is also extremely improbable. I like the infinite improbability drive.”

In the reality of The Hitchhiker’s Guide to the Galaxy, the infinite improbability drive creates an effect where a starship “passes through every conceivable point in every conceivable universe almost simultaneously.” A side-effect of the improbability drive is to cause seemingly unlikely coincidences or unimaginable events to be totally explainable. Douglas Adams apparently invented the concept of the infinite improbability drive to write his way out of certain plot problems with his novel. Correlatively, ten years ago, Elon Musk’s ambitious SpaceX probably seemed just as absurd to certain traditionalists, our contemporary equivalent of a two-headed space president stealing a spaceship for no reason. But Zaphod got away with stealing the Heart of Gold, so maybe Musk can pull off this Mars thing.

Unsurprisingly, Musk’s ship will have 42 raptor engines. And in The Hitchhiker’s Guide to the Galaxy, the answer to “life, the universe, and everything” is revealed to be simply: “42.”

During his speech, Musk also emphasized how tricky it would be to develop “interstellar flight right off the bat” prior to getting to Mars, suggesting there’s a continuum to innovation and invention. Of course, if Musk’s Heart of Gold had a “real” improbability drive, anything would be possible.

More like this
Science
Jan. 17, 2023
What’s happening with Starship? New SpaceX photos show a launch could happen soon
By Jennifer Walter
Science
Jan. 28, 2023
The best mystery thriller on Netflix ignores a basic fact about hydrogen energy
By Tara Yarlagadda
Science
Jan. 21, 2023
A deadly fungal plague swept the world of The Last of Us — is it realistic?
By Tara Yarlagadda
LEARN SOMETHING NEW EVERY DAY.
Related Tags
Share: