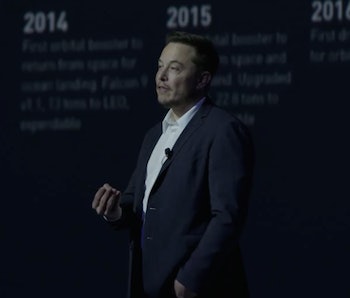 “History suggests there will be some doomsday event,” SpaceX CEO Elon Musk said early in his presentation on Tuesday at the International Astronautical Congress in Guadalajara, Mexico. To avoid that doomsday scenario and the extinction of humanity, we need to look beyond Earth, but it’s going to take a lot of money.

During “Making Humans a Multiplanetary Species,” he seemed to answer many of the questions we have about cost. For some, it might be like selling their house and using the money to buy a one-way ticket to Mars.

“If we can get the cost of moving to Mars to the cost of a median house price in the U.S., which is around $200,000, then I think the probability of establishing a self-sustaining civilization is very high,” Musk proposed, noting that each ship would carry about 100 people to Mars. Eventually 200 people might make the trip.

“Almost anyone, if they saved up and that was their goal, they could ultimately save up enough money and buy a ticket and move to Mars — and Mars would have labor shortage for a long time so jobs wouldn’t be in short supply,” he said, noting twice that Mars is going to need everything from pizzerias to iron foundries, and there will be “no labor shortage” on the planet. Presumably, you’d be given a dwelling until you could afford your own new Martian dwelling.

In the near-term back on Earth, figuring out how to pay for the Interplanetary Transport System — sort of a Union Pacific railroad, but for Mars — occupies the minds of many, none more so than Musk, who later in his presentation put a number on the cost: $10 billion.

“It’s a lot of money to get there,” Musk said of future trips to get to Mars, which will last around 80 days but he guessed might one day be as short as 30.

Musk faces critics back on Earth and in the present, though: there are fierce libertarians and financial conservatives in America who think the federal government shouldn’t extend the tax breaks they view as too generous, or subsidies and incentives, to his companies. Musk’s other two companies — electric transport company Tesla and solar panel-maker Solar City — receive the most ire in comments sections across the internet and in conservative-leaning media, SpaceX does have contracts with NASA to complete supply missions to the International Space Station.

“Right now, SpaceX is spending well under five percent of its budget on the Interplanetary Transport System,” Musk said of the Mars project. That’s equivalent to “a few tens of millions of dollars.”

Musk shared his vision for a “huge public-private partnership” to not just pay for the trip to Mars but to establish colonies there, relating it to how the United States was settled.

“I know there’s a lot of people in the private sector who are interested in helping fund a base on Mars and then perhaps there will be interest on the government sector side to also do that,” he said. “Ultimately, this is going to be a huge public-private partnership. That’s how the United States was established.”

Musk brought his own role into perspective, saying his assets — Tesla, Solar City, etc. — are all going toward financing SpaceX:

While it’s serious business to raise enough money to start a colony on another planet, Musk did take a moment during his presentation to make light of the monumental task by riffing on an aged, but still-so-good South Park bit:

Send Cargo and Astronauts to ISS