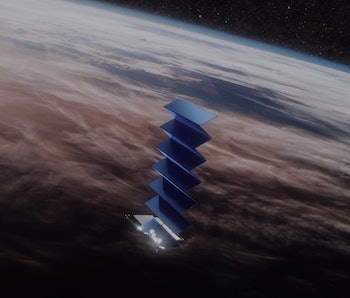 SpaceX is about to take another step in its goal of developing a fully reusable rocket.

The space-fairing firm announced this week that its second Starlink mission, which will send up another 60 internet connectivity satellites on November 11, will re-use the protective fairing from a previous mission. The launch completed its static test fire on November 5, in preparation to take off from Space Launch Complex 40 at the Cape Canaveral Air Force Station in Florida.

It’s a big step toward the California-based company’s goal of developing a rocket that works more like an airplane. The rocket industry has traditionally treated their vehicles as disposable, while airlines save the vehicle after every flight and use the efficiency savings to reduce the cost of air travel. SpaceX is aiming to do the same with rockets, landing the expensive booster, gradually recovering smaller components, and eventually completing development of the fully-reusable Starship.

SpaceX Starlink: the race to get the world online

SpaceX’s Starlink constellation could offer a major source of revenue for the company. Where the entire rocket launch industry only brings in around $5 billion in revenue per year, the lucrative internet connectivity industry could offer an opening for a space-faring firm that’s able to offer high-speed internet connections. CEO Elon Musk has suggested that the global internet industry accounts for around $1 trillion annual revenue, and SpaceX could perhaps access between three to five percent of that. This could help fund some of its bigger missions, like a city on Mars.

The Earth only has around 5,000 satellites orbiting in space. Starlink would dramatically increase that number. An initial constellation outlined in May would cover 4,409 satellites, 1,584 of which would orbit at 550 kilometers high and the rest at 1,150 kilometers. SpaceX has applied for permission to launch a total of 42,000 satellites. It seems like a huge number, but company president Gwynne Shotwell has noted that an Earth with a population of 30,000 people would be incredibly sparse.

SpaceX is building out the Starlink constellation one launch at a time, with each Falcon 9 carrying 60 satellites. The first launch went up in May. A second launch was planned for October, but this was pushed back for unknown reasons. The company is planning to offer internet services after it has completed six launches, covering the northern United States and Canada latitudes.

SpaceX explained on Twitter that the mission would reuse the fairing from the Arabsat-6A mission. This mission, hosted in April 2019, was the second non-test mission for the Falcon Heavy, the world’s most powerful operational rocket. CEO Elon Musk confirmed in the aftermath of the mission that the company had successfully recovered both fairing halves.

The fairing is one of the less expensive components of the rocket, but still a big achievement. A Falcon 9 launch is priced at $62 million. The booster makes up around $45 million of that price, the large majority. The fairing can also offer impressive savings, clocking in at around $6 million for the fairing.

Fairing recovery has proven elusive for SpaceX. The company has employed a boat with a giant catching net on the rear, initially dubbed Mr. Steven and now known as Ms. Tree. In July 2018, the team upgraded the net to make it four times larger and give it a better chance at catching fairings. Around 12 months later, the team caught a fairing half from the STP-2 mission, which shone bright blue as it fell. Last month SpaceX debuted Ms. Chief, a fairing-catching ship that aids Ms. Tree to catch both halves.

It may seem like a relatively cheap component, but perfecting its rocket-recovering abilities could help SpaceX save even more money on rocket flights.

More like this
Innovation
6.15.2022 9:00 PM
Vulcan vs. Atlas V: What you need to know about the ULA's next mega-rocket
By Harry Stoltz
Science
6.24.2022 4:30 PM
NASA’s Artemis 1 mission is now taking the final steps toward its historic Moonshot
By Doris Elín Urrutia
Science
6.25.2022 4:00 PM
Voyager: 12 spectacular images from NASA's longest-lasting mission
By Jennifer Walter
Share: