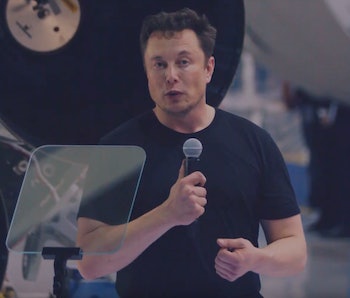 SpaceX is gearing up for “our most difficult launch ever,” CEO Elon Musk declared Wednesday. The company is about to launch the Falcon Heavy for the third time, transforming the world’s most powerful operational rocket from curious spectacle to a more regular feature of SpaceX launches.

The Department of Defense’s Space Test Program-2 is targeting a launch of June 24, launching from Launch Complex 39A at Florida’s Kennedy Space Center. The mission, managed by the United States Air Force’s Space and Missile Systems Center, will send 24 satellites into space.

Work is well underway to ensure the launch goes smoothly. The center core, part of the three-core set that essentially looks like three Falcon 9s strapped together, arrived at the launch complex over the first weekend of June. On June 7, the team delayed the launch by two days. On Thursday, the rocket completed its static test fire.

Everything appears to be going to plan for the rocket’s second non-test flight. But Musk struck a cautious tone on Twitter, signaling his thoughts during the build-up to the launch:

Musk has four good reasons to believe that this will prove a major test for SpaceX.

SpaceX’s missions normally don’t take too long. The Canadian Space Agency RADARSAT mission earlier this month took around an hour in total, from the liftoff to the deployment of the third and final rhino-sized satellite. This is a similar length to the company’s other missions

By comparison, STP-2 is going to be a long and complex mission. It contains a mix of four separate upper-stage engine burns, three separate deployment orbits, and a propulsive passivation maneuver to finish. The whole thing is expected to take a staggering six hours.

3. It Could Break a Distance Record for Landing

Musk was responding to one challenge in particular when he made his declaration: landing the three boosters after launch, a key aspect of SpaceX’s goal to reduce the cost of rocket launches. The Falcon Heavy’s February 2018 test mission successfully landed the two side boosters on land, but missed the Of Course I Still Love You done ship in the Atlantic Ocean by around 300 feet. Its first commercial mission, Arabsat-6A in April, improved and managed to save all three.

Teslarati notes that this mission will raise the stakes by landing the center core on the drone ship 1,245 kilometers (774 miles) out in the sea. This is expected to be the farthest-ever landing of this kind:

While the reasoning behind the change is unclear, and neither party has explained why, it could mean the mission sets even more records.

2. It Will Reuse Side Boosters

This will be the first Falcon Heavy mission to reuse boosters, those from the Arabsat-6A mission. Although the February 2018 side boosters made it home, the company has developed a new “Block 5” variant with even more power for future missions. This mission’s success could signal that SpaceX can successfully recover and re-fly a Falcon Heavy booster, paving the way for even cheaper spaceflight.

This is perhaps one of the smaller concerns about SpaceX’s mission, as reusing boosters has become almost commonplace for the less powerful Falcon 9. When NASA announced it would use a previously-flown booster to send supplies to the International Space Station in December 2018, program manager Kirk Shireman said the risk with the vehicle was “not significantly greater than a new booster.” Shireman explained that some risks are higher while others are actually lower, adding that “the net result is about equivalent risk.”

Regardless, the mission will be a test for the Air Force. Randy Kendall, vice president of launch programs for Aerospace Corp that advises and supports the Air Force in related areas, told SpaceNews that STP-2 “will be the first trial to look at how SpaceX processes, refurbishes and re-flies vehicles.”

1. It’s for the Department of Defense

This will be the first Falcon Heavy mission for the Department of Defense, a key client for SpaceX. The department awarded the company $297 million in mission contracts in February 2019. Its success could pave the way for further launches, and encourage further use of reused rockets.

These satellites include the GPIM that’s researching environmentally frendly spacecraft fuels, two student research projects, and a series of miniature “CubeSats” that supports projects like amateur radio and a solar-sailing spacecraft.

It’s a far cry from the red Tesla Roadster that went up on the Heavy’s first mission, and it’s perhaps little wonder that Musk is ratcheting up the rhetoric.