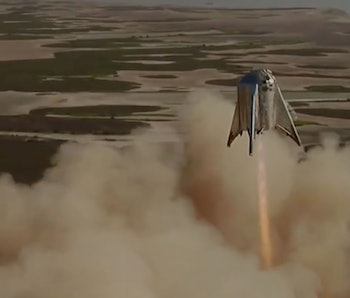 The little Starship that could almost feels like a distant memory now.

In summer 2019, a short water tower-esque rocket shot 150 meters up into the air and landed again. It marked the culmination of work on a ship called the “Starhopper,” a shortened version of the Starship designed to one day send humans to Mars. At the time, SpaceX CEO Elon Musk affectionately dubbed the little machine “R2D2’s Dad.”

The project is aimed at starting a colony on Mars, reshaping humanity into a multi-planetary species. The ship is designed to use liquid oxygen and methane, not the RP-1 rocket propellant normally used for flights. That means humans could visit Mars and use natural resources to refuel, potentially moving further out into the Solar System or returning home. A trip around the Moon, one of the first Starship missions, is set for 2023.

During that same month, SpaceX started working on the Starship Mk.1. Where the Starhopper measured around 60 feet tall, the full-size Starship would reach 164 feet. Paired with the Super Heavy booster that lifts the ship out of Earth’s atmosphere, the full construction comes to 387 feet. All three vessels measure 30 feet in diameter.

Starhopper only used a single Raptor engine to lift itself up, but it still packed an impressive punch. In July this year, the little ship flew 20 meters into the air. This set the stage for its big moment.

The 150-meter jump was then set for August 2019. SpaceX had to delay by a few days due to an issue in the initial launch. Around 0.8 seconds after the scheduled launch, the team discovered an issue with the Raptor spark plugs. Musk later explained that an “embarrassing” wiring issue disrupted the spark plugs.

One month later, Musk would quickly divert attention toward the Starship Mk.1 prototype, declaring plans to complete an orbital flight as soon as possible. While the world is focused on the giant Starships stacking up in Florida and Texas, the Starhopper made its mark for a brief moment in the first half of this year.

As 2019 draws to a close, Inverse is revisiting the year’s 20 wildest space stories. This is #14. Some are awe-inspiring, some are bordering on science fiction, and some are just, well, wild. Read the original article here.

More like this
Innovation
Jan. 25, 2023
Starship orbital flight: SpaceX successfully loaded the rocket with over 10 million pounds of propellant
By Mike Brown and Molly Glick
Science
Jan. 29, 2023
NASA-funded study to research if bacteria could help form building materials on Mars
By Matt Williams and Universe Today
Science
Jan. 28, 2023
ChatGPT could help students cheat — but it could also revolutionize education
By The Conversation and Sam Illingworth
LEARN SOMETHING NEW EVERY DAY.
Related Tags
Share: