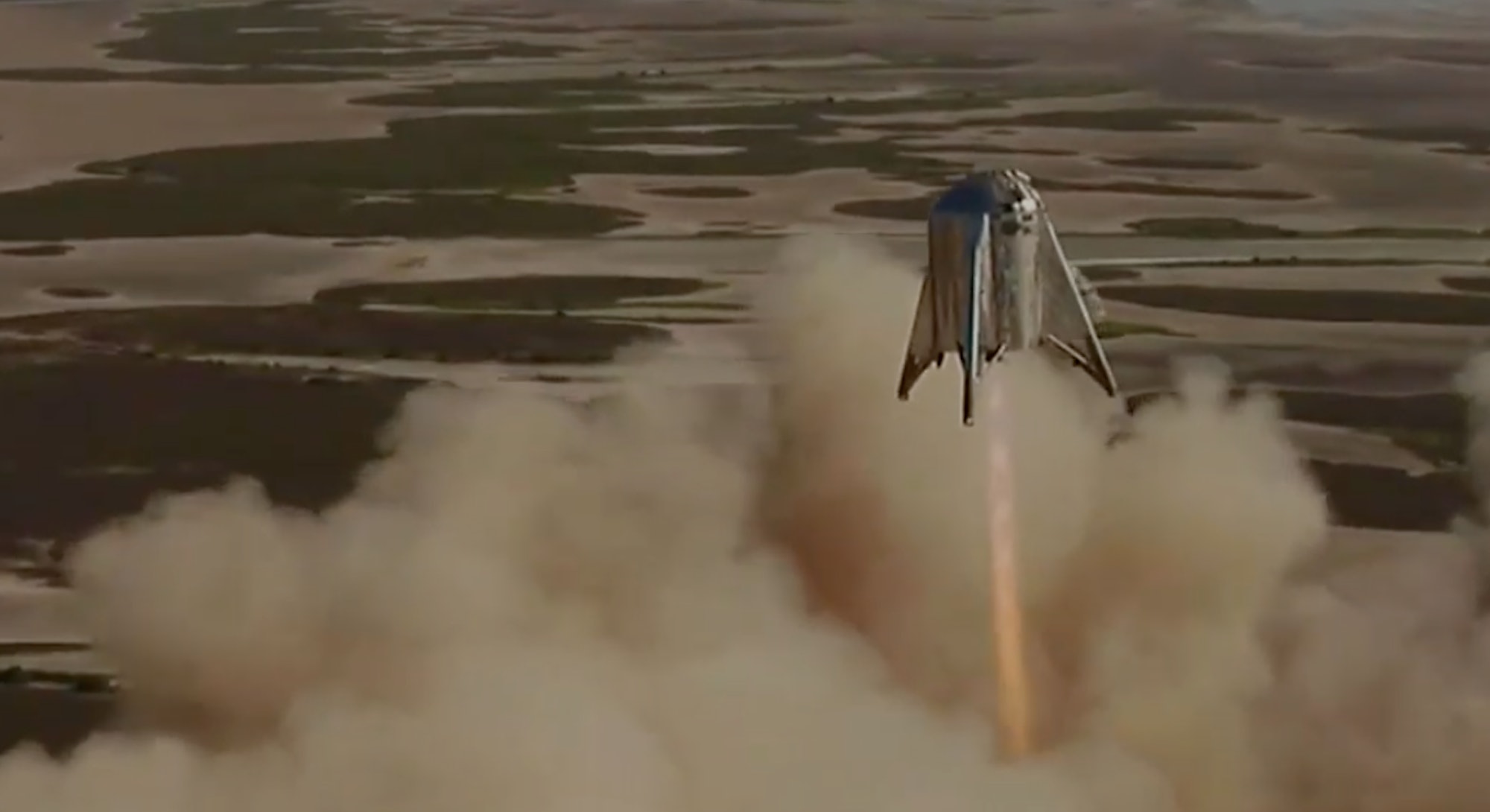 Lift off! SpaceX launched the Starhopper on Tuesday night, the stainless steel construction that’s an early step toward a crewed mission to Mars. The rocket jumped 150 meters (around 500 feet) into the air, using the Raptor rocket engine designed for full reusability.

The launch, which took place at the Boca Chica launch facility at the tip of Southeast Texas, marks the final hop test for the Starhopper. The rocket hit its target altitude and remained there for just under a minute before descending. SpaceX will now continue its development of an orbital prototype, expected to be unveiled in mid-September.

This an early step toward a crewed mission to Mars.

SpaceX originally planned to complete the launch on Monday. The launch was stopped 0.8 seconds after its scheduled beginning due to an issue with the Raptor engine spark plugs. Unlike the Merlin engine used on the Falcon 9 and Falcon Heavy, which combine two materials to ignite the engine, the Raptor uses methox torch igniters that act as “heavy duty spark plugs.” SpaceX CEO Elon Musk has said that the change has made development of the rocket harder. Monday’s launch was cancelled because of a wiring issue with the spark plugs, a low tech problem that Musk described as “embarrassing.”

The curious-looking Starhopper — “R2D2’s Dad,” in the words of Musk — has been compared to a water tower. Its development has been documented over the past several months by local space fans who shared videos and images of its gradual construction. The fans even documented a storm that affected the nosecone of the Starhopper in January 2019.

SpaceX is now expected to complete development of an orbital prototype. This larger construction uses three Raptor engines. Two versions of the prototype are under construction at the company’s Florida and Texas test facilities.

It all started with the Boca Chica facility tests. The team fired an early version of the Raptor engine back in September 2016, and fired its more recent version in February 2019. Testing showed the engine could reach 172 metric tons of force, two more tons than required by the design. Storing the fuel in a deep cryogenic state should offer a further 10 to 20 percent boost.

In April, the hopper completed a tethered firing. In July, the ship completed a hop of around 20 meters into the air. Tuesday’s hop is expected to be the last jump for the Starhopper.

"“One day Starship will land on the rusty sands of Mars.” — Elon Musk

Mask first unveiled the Starship’s predecessor, the BFR, in September 2017 at the International Aeronautical Congress in Adelaide, Australia. The original design featured a cargo area with pressurized volume of 825 cubic meters, the equivalent of an Airbus A380 jetliner. The cargo area would fit 40 cabins, each large enough to fit six people but expected to comfortably transport two or three people. That means each BFR can carry 100 people to space. Aerospace observer Rick Tumlinson has compared the vehicle to the Mayflower, the ship that transported the pilgrims to the New World.

The design for the ship that will carry humans to Mars has since undergone numerous design changes, most notably the switch to stainless steel late last year. The rocket’s general concept has not changed much in this time, however, and it’s still expected to enable humanity to become a multi-planetary species.

“BFR [the former name of Starship] is really intended as an interplanetary transport system that’s capable of getting from Earth to anywhere in the solar system as you establish propellant depots along the way.” Musk said in September 2018. “Mars, Moon, maybe Venus, the moons of Jupiter, throughout the Solar System.”

The Starship enables this through the use of the Raptor engine. This engine uses liquid oxygen and methane for fuel, unlike the Merlin engine that uses rocket propellant. The fuel enables astronauts to construct fuel depots on the surface of Mars and other planets, enabling humans to return to Earth or venture out further into the solar system.

The first SpaceX astronauts to reach Mars will be tasked with establishing a depot and basic life support systems, gradually expanding out the base with subsequent missions.

SpaceX has big plans for this settlement. It aims to establish a city on Mars by 2050.