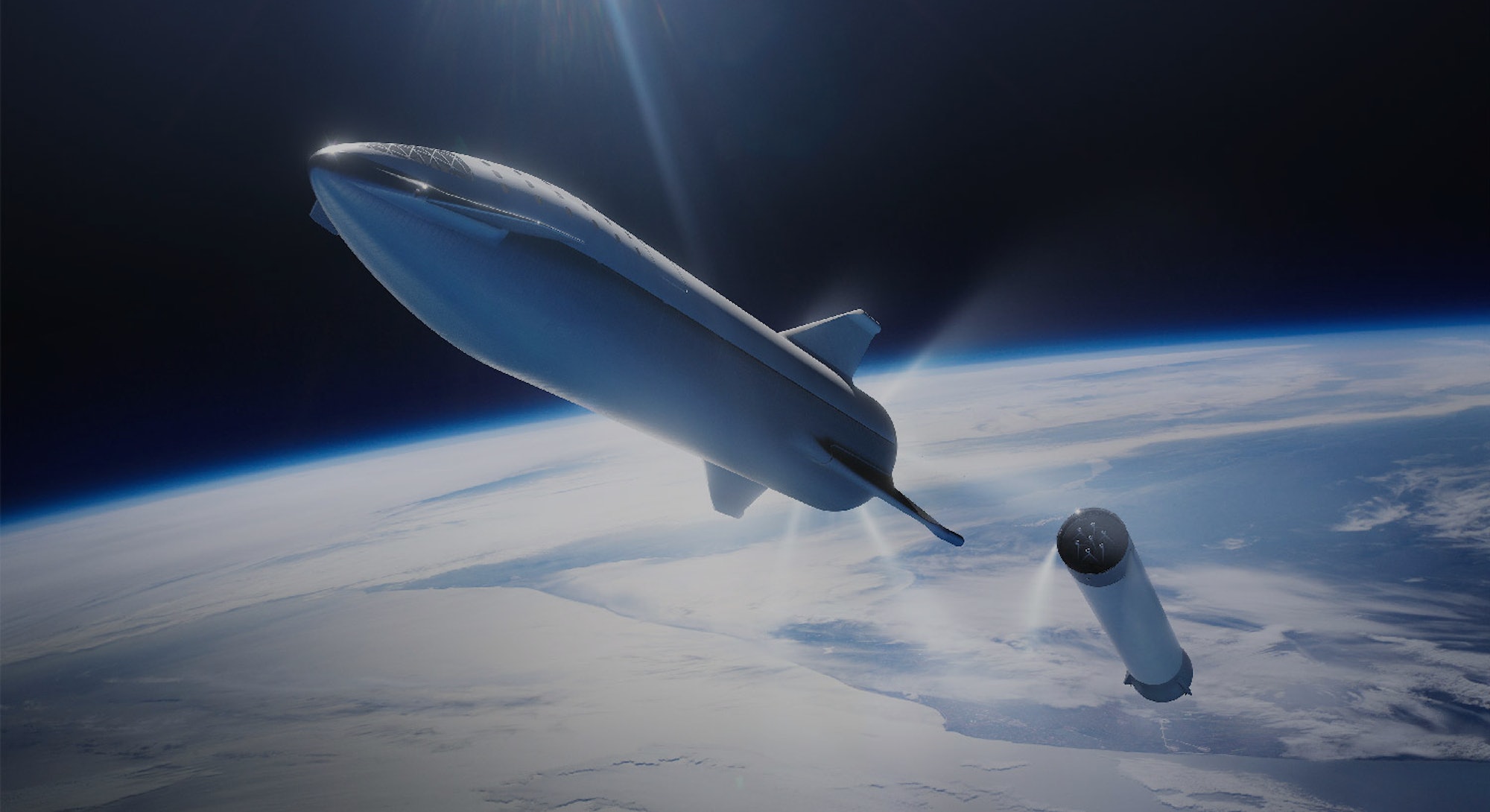 Humanity could be on the verge of a breakthrough in space exploration, but one of its architects is a virtual unknown.

Rick Tumlinson, 63, has spent the past three decades pushing for a new space race, testifying before Congress to “peel the fingers of the aerospace industrial complex” off of transportation and pave the way for the likes of Jeff Bezos and Elon Musk. Last year, he founded the SpaceFund, a venture capital firm aimed at bringing money into this new era.

Last month, Tumlinson’s team released “Reality Rating,” a database that ranks companies based on how well the hype lives up to their true potential. It’s the sort of information that could prove useful for investors, just as humanity gains the ability to send people and items into space cheaper than ever.

Inverse spoke by phone to Tumlinson three hours before he took the stage at Miami’s North American Bitcoin Conference. Although “not a bitcoin person” — bar a 2012 flirtation with launching a CubeSat-sized crypto miner into orbit — he sees both groups as engaged in a “somewhat parallel revolution,” and he “basically reinvented” the SpaceFund in November to attract cryptocurrency investors.

Although he says he has a “tendency to go off on arcs,” Tumlinson’s broad career makes each trail of thought just as engaging as the last. He veers from passionately decrying the likes of Boeing to pitching his idea for extraterrestrial sunblockers, all in a straight-talking manner refreshingly void of jargon. Tumlinson is on the cusp of a culmination of his life’s work, and his excitement is palpable.

Below is our interview, edited for clarity and brevity.

Inverse: Do you think there’s a lot of rubbish in the space industry?

Tumlinson: I don’t think there’s a lot of rubbish, maybe some rubbish. There are a lot of people who have good technologies or people or business plans, but don’t have all together.

I want to be clear that I don’t believe that the space field is full of shysters and fakes. This is not the ICO [cryptocurrency initial coin offering] community. I do believe there’s an overabundance of companies in terms of potential available markets.

There’s basically two or three ways you can launch a spacecraft right now. One is a rider on the bus of a larger launcher. The ISRO [Indian Space Research Organization] recently carried 104 small satellites at once into orbit. Alternatively, we have these companies that are proposing what I’d call the Ubers and Lyfts. Those are far fewer.

Tumlinson predicts that many of these Uber-like firms will fall away over time.

He’s possibly one of the most qualified to make that judgement: His illustrious career covers saving Russia’s Mir space station through his lobbying efforts, helping to send the first self-funded space tourist to the International Space Station, and winning the 2015 World Technology Award for Space.

He’s been in the industry long enough to witness several long-term trends.

Inverse: Why are there so many companies out there?

Tumlinson: I think what’s out there are a lot of young male engineers who like rockets, who are playing into the excitement of what is about to happen. They see these announcements of these multi-thousand satellite constellations and think, my system will work better. There’s nothing negative at all about what’s happening; it’s exciting. But they are all going to run into what I call Darwin’s Spreadsheet, the harsh realities of business.

I will often run into young engineers. I’ll ask them, “What’s your specialty?” And they’ll talk about something involving rockets, and I’ll tell them, “Really man, you should look at some other area. It’s saturated right now.”

I believe in what [Elon Musk] and [Jeff Bezos] are doing, why they’re doing it, and why they’re not going to be stopped. They’re committed to opening the frontier. The BFR, or whatever it’s called today, is what I call a Mayflower-class spaceship because it carries over 100 people.

Even if he doesn’t go to Mars or the moon, the ability to deliver 100-plus people at a time to orbit, to space itself, is going to be the beginning of the biggest revolution in the history of humanity, if not life itself.

Having the ability to climb out of the gravity well of Earth means we have the potential to make life and humanity immortal, unkillable.

Is this like the day before the internet boom?

This is the day before the biggest change in humanity and life itself. This year is the 50-year anniversary of Apollo, and I make the assertion that from there to the next 50 years will be the most important period in the history of humanity. Because we will either be destroying the planet and beginning the fall back into mediocrity as a civilization, or we will break out of the planet.

Space has changed. When a guy called Neil Armstrong stepped on a dusty rock in 1969, it was hailed as a marvel.

Today, Blue Origin has set its sights on millions of people working in space, while SpaceX wants to build multiple cities on Mars.

It’s out with the exploration, in with the colonization.

Inverse: Where will we go?

Tumlinson: Wherever anybody wants to go! Robert Heinlein, the science fiction writer, said: [“Once you get to Earth orbit, you’re halfway to anywhere in the solar system.”]

Some people will go to Mars, some the moon, some to a place I call free space.

Others will help the Earth.

I’m looking at maybe putting a symposium together about the three grand projects that could do that. One is defending from asteroids. Number two would be space solar power. Three would be something that people haven’t talked about a lot, where if we slip into a runaway greenhouse where the planet reached a tipping point and started getting hotter and fed on itself … the idea of having some objects between Earth and the sun, like window shades.

The estimates for building the Earth shades are in the realm of the cost of the Afghan and Iraq War. It would be the single most expensive project we’ve ever done, and we spend that money killing each other anyway, so why not?

That seems like a good reason to have a lot of small companies vying to take on this next stage. Do you see the market contracting?

No, I do see it expanding. You’re going to need a lot of niche players; you’re just not going to need 111 of them. There will be a shakeout. I want to be clear, 90 percent of the teams are good and brilliant people. It’s just that you have to have a lot of things going in your favor to have any successful startups.

Are there any companies people aren’t really talking about that hold great promise?

Tumlinson: I’m going to avoid picking winners. The big guys are pretty clear: SpaceX, Blue Origin, ISRO, the Russians, the Chinese, possibly ULA [United Launch Alliance]. One of the companies that is really getting some traction is Rocket Lab, out of New Zealand. They’re very impressive. There’s a company that’s looking at using different kinds of plastics to build large portions of the vehicles. We find that fascinating.

We’re gonna probably invest a little bit of our money in the launches, but not a majority. It’s just so high risk. There is money chasing those guys. Most of your investors are male. Boys like rockets!

Absolutely! What’s really exciting is having these guys show up, Elon and Jeff, the Billionaire Cavalry. We were out there fighting in the trenches. In 1995, I spoke in Congress and called for all transportation to and from the space station to be commercially provided. It took us about 17 years to make it happen. Aerospace did not want this era to occur. Big aerospace hates Jeff and Elon.

Oh yeah. They’re terrified of them. Space projects were closely held between the companies, congressional staffers, and NASA. Cost-plus contracting is how you get military jets that cost millions of dollars: If you, the government, want me, the contractor, to build you a flashlight, I get to charge you 10 percent of whatever it cost me to develop. Why would I sell to you for $10 and keep $1 when I can charge you $1 million and keep $100,000?

And so here comes these crazy guys who happen to be true believers. Our goal of human settlement trumps this idea of grab the money and run. Creating robust systems that don’t have to be replaced … that’s antithetical to an aerospace industrial program approach. You want things to be replaced every five years!

While the first space race was a competition between nations, this new race is a fight between corporations.

Blue Origin was founded in 2000 with the goal of creating a vertically landing passenger ship; SpaceX was founded in 2002 with a goal of settling on Mars; and Richard Branson’s Virgin Galactic was founded in 2004 to enable rapid flights around the Earth. These efforts ratcheted up in the following decade, with SpaceX launching its first Falcon 9.

These newcomers are racing both against each other and the established providers of national space agencies.

Inverse: But it seems like a rather friendly competition between Musk and Boeing CEO Dennis Muilenburg about who will get to Mars first.

Tumlinson: SpaceX was founded to achieve the dream of establishing human settlements on Mars; Boeing is a government contractor. ‘Nuff said. Boeing don’t sit there at night with their dreams of how they’re going to enable their children to go live on Mars. Some of their employees might, but their job is to bring money to Boeing period.

Elon has said that the profits he makes in life is going to go to establishing a human colony on Mars. Jeff gave his valedictorian speech in high school about building colonies in space.

This is a philosophical drive. And it’s competitive! But I’d rather have that than an arms race. I would rather people compete on how far their arms will reach than what their arms can do to each other.