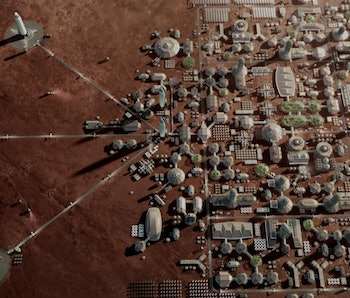 SpaceX wants to give rise to a human settlement on Mars.

Starting small with a couple of spaceships and expanding out into a sprawling metropolis, a colony on the red planet is partially the vision of Paul Wooster, principal Mars development engineer for SpaceX. Speaking at the 21st Annual International Mars Society Convention in August, Wooster detailed how SpaceX is grappling with some of the big questions that come with taking on one of the biggest projects in human history.

“The idea would be to expand out, start off not just with an outpost, but grow into a larger base, not just like there are in Antarctica, but really a village, a town, growing into a city and then multiple cities on Mars,” Wooster said. The convention notes that Wooster is a long-time supporter that attended early conferences and also served as a founding member of the Mars Society.

SpaceX founder Elon Musk detailed the company’s plans to reach Mars at the International Astronautical Congress in Adelaide, Australia, in September 2017. A newly designed “BFR” rocket that measures 348 feet tall will produce liftoff thrust of 5,400 tons from 31 Raptor engines. SpaceX will launch two rockets and their corresponding spaceships to Mars in 2022, filled with supplies for future missions. The company will send four more in 2024, two of which will ferry the first humans to the planet to set up an outpost.

Wooster explained that each spaceship would carry around 100 tons of supplies, meaning the six ships would ferry around double the mass of the International Space Station to Mars. The ships would probably serve as the home for the first humans initially, as they work to extract resources and become self-sufficient fast. The humans will be tasked with extracting at least one tonne of ice per day, part of which will help make the methane fuel to bring the humans and rockets back to Earth.

The six ships are the first steps to permanent Martian cities. The humans will then need to consider establishing surface power, developing landing pads, habitats, greenhouses, additional life support, and all the other amenities to encourage a functioning settlement.

“All the capabilities you need to have a growing population on the surface,” Wooster said.

The humans will also have to consider tasks like setting up a suitable recycling system — no word on whether they’ll use color-coded bins. Another future issue is surface mobility, with artist concepts detailing pressurized rovers and a space suit for moving around the surface.

There are also questions about what they would be doing in their day-to-day life, once the settlement is stable. Researchers could learn more about the history, geology and climate of Mars. Teams could dive sub-surface, looking at questions about whether there ever was life on Mars — and if there is still life on Mars.

“These types of things are real opportunities for pretty much anyone in the broader Mars-related community to engage in,” Wooster said. “SpaceX is focused on getting the transportation architecture set up as quickly as possible, but it’s really to enable all these other types of activities.”

More like this
Innovation
8.4.2022 11:00 AM
X-Ray study adds to the mystery shrouding shrunken heads’ origins
By Sarah Wells
Innovation
20 hours ago
Scientists may have revealed the ancient secret behind China’s Bronze Age
By Sarah Wells
Science
14 hours ago
Asteroids may have carved Earth's landforms as we know them — study
By Doris Elín Urrutia
Related Tags
Share: