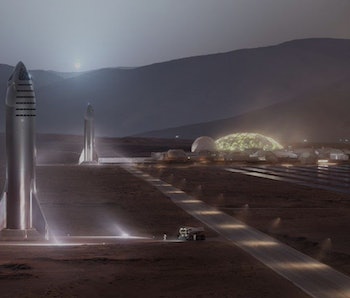 “Both sites will make many Starships,” Musk wrote on his Twitter page on Wednesday. “This is a competition to see which location is most effective. Answer might be both.”

The teams will be working toward the same end goal of producing the same ship, but sharing ideas and learning from each other about the most effective way to build. It’s an idea that could help SpaceX accelerate its goal of sending the first humans to Mars, establishing a colony and developing humanity into a multi-planetary species. Musk has grand ideas for placing a propellant plant on Mars that harvests elements from the planet to create liquid oxygen and methane, used to power the Raptor engines. If successful, it could mean a city on the planet takes form as early as 2050.

Musk outlined his plan for this galaxy-conquering ship back in September 2017, under the less-catchy title “BFR.” It was announced with a total of 31 Raptor engines, providing a liftoff thrust of 5,400 tons to lift a total vehicle mass of 4,400 tons. A further seven engines power the ship itself. The whole vehicle stands 348 feet tall, around 150 feet of which is the ship that carries 100 people at a time.

Around 12 months later, Musk announced a name change and a switch to stainless steel, enabling a transpiration cooling system to keep temperatures low. At the company’s Boca Chica test facility in Texas, SpaceX completed a series of tethered hops with a miniaturized “Starhopper” using a single engine in April. SpaceX then turned its attention to building an orbital prototype at the Texas facility to complete a more ambitious test run.

That, it seems, was only half the story.

SpaceX’s Second Starship: What We Know So Far

The alternate Starship construction project was revealed earlier this week by an eagle-eyed NASASpaceFlight forum user called “Zpoxy.” The user spotted the work at the Cidco Industrial Park in Cocoa, Florida. The park is a 17-minute drive from Cape Canaveral, home to the Cape Canaveral Air Force Station and Kennedy Space Center, where SpaceX conducts the vast majority of its launches.

Although the original post sparked a long-running gag about whether the stainless steel object in the image is in fact a water tower, in-jokes quickly subsided as the magnitude of the discovery became clear.

“Nearly fell out of my chair when I saw this, incredible they are already constructing 2 at the same time,” wrote a forum user called “RocketLover0119.”

Musk later confirmed that SpaceX is indeed building competing Starships. Insights gained by one team will be shared with the other, but Musk noted that the team is not required to use them at all. The company plans to install landing fins as early as next month.

The CEO also confirmed that work is underway on building more Raptor engines for the ships. Engine number four is complete, and a facility in Hawthorne is working on number five. The goal is to ramp up the build speed through numbers six and 10, completing the 100th Raptor engine by early next year.

It sounds like SpaceX is building a lot of Raptor engines, but considering how each Starship “Super Heavy” booster alone will require 31 engines, and the ship itself needs another seven, 100 engines is only really enough for two whole ships.

SpaceX plans to launch two ships on its first unmanned visit to Mars, and a further four on the first manned visit, meaning it needs to build at least six. That comes to around 230 engines for the most basic manned trip to Mars.

For the orbital prototype, SpaceX is not expected to build the Super Heavy booster or associated 31 engines. However, Teslarati notes that even this more limited construction will offer 1.5 times the thrust of a Falcon 9 booster: as each Raptor engine provides 38,000 pounds of thrust alone, a full seven-engine ship will use 266,000 pounds of thrust.

That means the team will have to work out new issues associated with the high amounts of force, unfamiliar stainless steel build materials, and unique engine versus the Merlin one that powers the Falcon 9 and Falcon Heavy. Both teams working together could accelerate this process.

Musk is expected to provide more details about the Starship on June 20. The company also plans to send Japanese billionaire Yusaku Maezawa around the moon by 2023. Accelerating the build process could help it meet these initial goals, and paves the way for meeting its more ambitious targets for Mars.