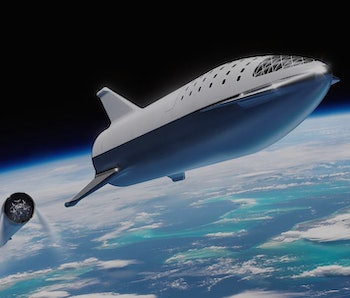 The Starhopper is entering its next phase. Work is underway on an orbital prototype of the Starship, SpaceX’s vessel designed to ferry humans to Mars and beyond, just days after the company completed its first tethered hops with the miniaturized version of the final ship.

In the same week that SpaceX plans the first commercial launch of the Falcon Heavy, the world’s most powerful operational rocket, the company is setting its sights to the future with a ship that could blow even the Heavy’s impressive stats out of the water. Where the Falcon Heavy can deliver over 140,000 pounds to low Earth orbit, the Starship is expected to deliver over 200,000 pounds. Similarly, where the Heavy weighs 3.1 million pounds and stands 230 feet high, the Starship’s original specs in September 2017 revealed a ship weighing 9.7 million pounds and standing 348 feet tall.

The orbital prototype of the stainless steel ship has started coming to life at the firm’s Boca Chica test facility in Texas.

It’s the next big step for the Starship. The company fired the Raptor engine for the first time in February, reaching 172 metric tons and 257 bar chamber pressure using warm propellant. It then completed two tethered hops last week, one on April 3 and another on April 6, with a miniaturized “Starhopper” that uses one engine. The next step will be to complete “Starhopper” tests with three engines for suborbital flights while work continues on the ship for orbital test launches.

Musk claimed in January the orbital version would arrive next year — although he sped up this timeline in March to a June 2019 reveal. The final ship is expected to use 31 Raptor engines, seven on the ship itself and the rest on its booster.

Teslarati notes that the stainless steel used in this construction appears thinner than that used in the Starhopper, which may be due to a refinement of the ship’s design in the buildup to the final model.

Musk stated in December 2018 that the team had started building sections of the orbital version in San Pedro, California. The company finished work on its “hopper” on January 11. Evidence suggests SpaceX started construction of the orbital prototype at Boca Chica around mid-March before the “hopper” had completed its tests. Musk told fans on Twitter that the “hopper” did not require a new nosecone despite blowing over in a storm two months prior, meaning the nosecone under construction was part of the orbital ship.

Starship: How It Will Power SpaceX’s Future Missions

Musk unveiled the Starship, then known as the BFR, at the International Astronautical Congress in Adelaide, Australia, in September 2017. In its original design, the ship had a liftoff thrust of 5,400 tons, measured 348 feet long (157 feet of which were for the ship), and was capable of comfortably transporting around 100 people spread out over 40 cabins.

Musk has since renamed the ship the Starship, giving it a stainless steel design that keeps the outside cool through transpiration cooling, essentially sweating out fluids. SpaceX was testing the backup heat shields at 2,510 degrees Fahrenheit last month.

The ship is powered by the Raptor engine. Unlike the Merlin engine used in the Falcon 1, 9, and Heavy that uses liquid oxygen and rocket propellant, the Raptor engine switches the propellant for methane. This is important, as it enables explorers to harvest fuel from the atmosphere of other planets, meaning a Mars expedition can set up a fueling depot and return home. Musk envisions a network of fuel depots, creating a “planet-hopping” system that Neil deGrasse Tyson has said could reduce wars.

The cryogenic temperatures required to store these fuels have caused problems, delaying the first hop tests due to ice formation around the propellant valves. NASA is also researching similar issues. SpaceX expects to get 10 to 20 percent higher performance using cooled fuel versus warm propellant.

The company’s most ambitious plan is to send the first humans to Mars. This is a journey that will take around three to six months. SpaceX plans to initially send two unmanned Starships with cargo, before sending two further unmanned ships and two manned ships around two years after.

Like NASA, the company plans to time its launches to coincide with when the Earth and Mars are at their closest. Musk has said the company could develop a self-sustaining city on Mars by 2050, assuming the company starts in five years’ time and completes its mission within 10 orbital synchronizations.

SpaceX is also planning some smaller missions. It aims to send Japanese billionaire Yusaku Maezawa on a trip around the moon with six to eight artists in 2023, as part of an art project. The four-to-five-day trip is expected to come before the first Mars trips.

The company has even suggested using the ship to move people around the Earth, traveling from New York to Paris in 30 minutes.

It all starts with those curved steel cones in the Boca Chica facilities.

More like this
Innovation
8.13.2022 3:00 PM
Mars City: 3 Red Planet resources could forge a critical building material
By CAROLYN COLLINS PETERSEN and Universe Today
Innovation
8.9.2022 11:00 AM
This self-healing material could fix your dinged-up car in 30 minutes
By Molly Glick
Entertainment
8.5.2022 12:30 PM
For All Mankind Season 3’s space mogul is better than Elon Musk — here's why
By Ryan Britt
Share: