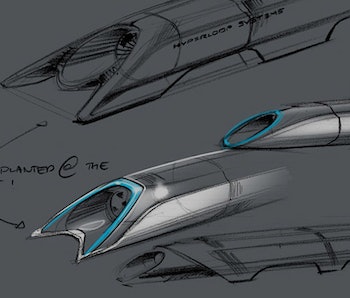 The futuristic method of moving people and goods, first outlined in a 2013 white paper, is designed to hit potential maximum speeds of over 700 mph. That could make it faster than a jet engine, soaring across landscapes and making the world feel smaller than ever. Thanks to its use of electricity, it could also cut back on carbon emissions otherwise emitted during flights.

Despite its grand promises, hyperloop has never quite reached its full potential. The current public record for a hyperloop is 288 mph, reached by student-led team TUM Hyperloop at SpaceX’s fourth competition on a 0.8-mile test track in Hawthorne, California. There are no hyperloop routes in public use anywhere in the world, and exploratory studies into its potential uses have remained exploratory studies.

Inverse predicts that, despite hyperloop’s failure to launch to these super-high speeds, one demonstration in the 2020s will reach the 600 mph speed of a jet engine.

Hyperloop: why it’s time to shine

When Musk first outlined the hyperloop, he gave the example of San Francisco and Los Angeles. The two cities are around 380 miles apart. A proposed high-speed rail would have allowed a trip time of two hours and 40 minutes. A hyperloop, Musk suggested, could move between the two in 35 minutes at a speed of 760 mph.

It was a strong claim. The land speed record for a rail vehicle was set by the maglev, which uses magnets to float above the track. Even this system could only reach 375 mph when it set the record in Japan in April 2015.

Despite the strength of the claim, teams working on hyperloop projects are confident that they could reach higher speeds. They just need a little more room.

For TUM Hyperloop, the team previously told Inverse that they could reach 700 mph with around 15 kilometers, or nine miles, of track. That assumes an acceleration rate of 0.3g. Delft Hyperloop thinks the magic number could be a tad larger, predicting a track of around 44 miles would provide a comfortable acceleration to full speed with passengers.

Musk has already proposed that SpaceX will offer a 6.2-mile test track with a curve for the 2020 competition. Virgin Hyperloop One, meanwhile, is planning to build a 21.8-mile track.

The question of hyperloop reaching jet-like speeds may not be if, but when.

As 2019 draws to a close, Inverse is looking to the future. These are our 20 predictions for science and technology for the 2020s. Some are terrifying, some are fascinating, and others we can barely wait for. This has been #18. Read a related story here.