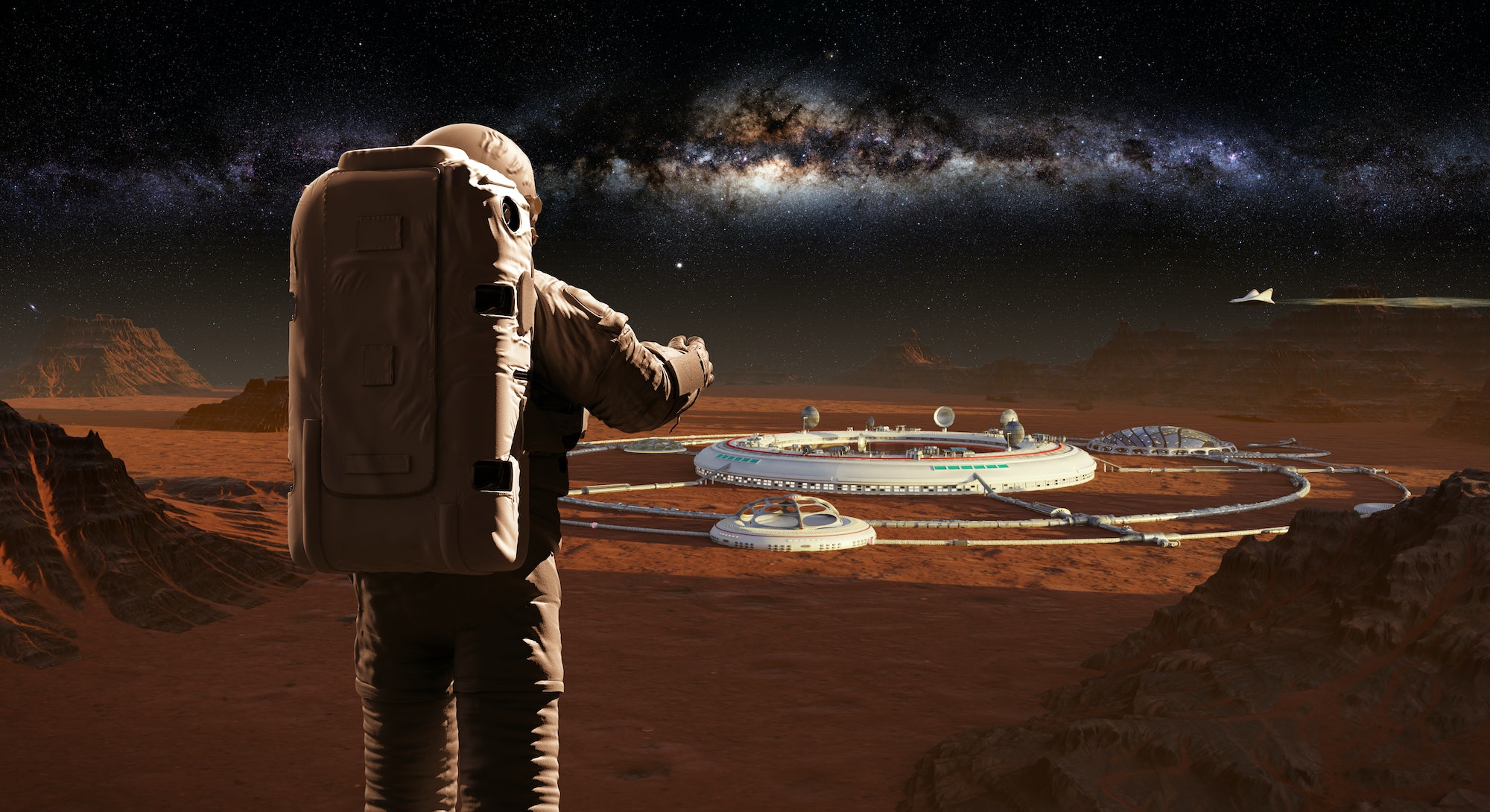 Anxious Astronaut has suffered an anxiety attack in space. It could be debilitating, they’re not sure. And unlike, say, a broken arm, it is not immediately visible to Anxious’ co-workers. Anxious Astronaut is good at hiding their problem, which is how they got through the screening process on Earth. But Anxious Astronaut needs to be operating at peak functionality, which Anxious Astronaut knows, which is making them more stressed, and they haven’t even acknowledged to themselves that they’re undergoing a silent crisis. Stress is tough.

Anxious Astronaut does not want to give up their duties, so they’re not taking time to self-evaluate. And besides, any human diagnosis is millions of miles of way, considering Anxious Astronaut and their team are halfway to Mars. So how can Anxious Astronaut’s team figure out what’s wrong? A biosensor. A small, nearly invisible biosensor placed on Anxious Astronaut’s forehead has detected unusually high cortisol, which the body releases when stressed. The data is shared with the medical staff on the mission, and Anxious is able to have their workloads reduced until they’re feeling up to snuff.

Thanks to developments in biosensors that NASA and outside group NextFlex are working on today, Anxious or Unhealthy Astronaut might be able to figure out what’s ailing them at speeds unimaginable today.

“They draw blood or urine,” Dr. Meyya Meyyappan is Chief Scientist for Exploration Technology at NASA’s Ames Research Center in California’s Silicon Valley, tells Inverse, describing the typical method of checking in on crew lifesigns. “The way it’s been, periodically they draw a drop of blood, you store it, and when the next opportunity comes — I call it the next UPS opportunity, which whatever the opportunity is, be it either a Russian spaceship or a shuttle — you wait, bring it back to Johnson Space Center [in Houston, Texas].”

Biosensors could make it easier for everyone in space to have access to the data they need, faster.

Health is complex in space. When humans are being sent to the International Space Station or on faraway missions, they have to pack light. Carrying heavy objects, like medical equipment, is a challenge. Nurse.org’s “How to Draw Blood Like a Pro” listicle mentions thirteen different items needed for a proper blood draw, ranging from gauze to “Bio-hazard leak-proof transportation bags.” Cutting down on travel items, in addition to not having any supply shops nearby, puts everything on board at a premium.

“Potentially, you can have cheaper sensors” through 3D printing, Meyyappan says. “We have the In-Space Manufacturing program. NASA has printed between 70 to 100 spare components. Obviously, a 3D printer is not going to make a biosensor, you need things like inkjet printing, other capabilities, which are in the cards right now.

It’s called the Fablab. We are in the process of getting ready, so when that lab is set up we can print biosensors as well.”

People who go into space are typically seen as having, as author Tom Wolfe put it in 1979, “the right stuff.” Astronauts are known for their physical as well as mental abilities, which means that there haven’t been that many health-related incidents in space.

The most common illness in space is Space adaptation Syndrome (SAS), or space sickness, which brings with it a feeling of disorientation and occasional nausea as the body adjusts to its new environs.

But it won’t always be like this. If entrepreneurs like Elon Musk and Jeff Bezos have their way, more and more people will go into space. And while the high standards of government will likely stand for some time, having more people in space makes it more likely that somebody will get sick. Having sensors that can passively probe astronauts without being a massive power draw offers a huge potential advantage.

“A single device basically has no value,” Dr. Meyyappan tells Inverse. It has to function within a system — a space station, for example — for it to be useful. So while NASA is working on crafting the perfect biosensor, stuffing as many as 16 sensitive carbon nanotubes onto a single chip, NextFlex is working at making sure these sensors can integrate into a system as a whole.

NextFlex, which is based in San Jose, California, was founded in 2015 with partial funding from the Department of Defense. It’s focused on what it calls the “rapidly expanding field of Flexible Hybrid Electronics (FHE).”

“We have to think it through in many different aspects, including disposal, and all the weight it could generate,” she says. “Astronauts should be able to apply the sensors themselves, so user point of view is rather different. Depending on the requirements, what do we power these sensors with? Are they rechargeable or they not rechargeable?”

There are as many sensors as there are potential uses, Pantchenko says. Some sensors are made disposable, one-time measurement. Others don’t like temperature. Figuring out the right system for NASA, the International Space Station, and future missions is an ongoing challenge. NextFlex hopes to have a working prototype by next year. Dr. Meyyappan suggests that the stress sensors that help out Anxious Astronaut could be a reality in five years.

And they don’t have to be limited to people, or to space. The biosensors could also be used for vegetables, Dr. Meyyappan suggests. “Potentially it could expand to growing the food right there,” he says, talking about monitoring vegetables being grown on the International Space Station. “Every time you start growing these things, they’re a source of pathogens too.”

“And, then, of course,” Dr. Meyyappan says, picking up steam, “there’s water quality monitoring. Most of the water on the ISS is recycled. Every drop of fluid is recycled into drinking water. There’s a need to check the water quality, for bacteria, salmonella, whatever.”