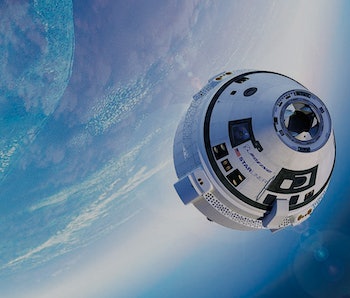 Boeing’s Starliner capsule has hit a snag. On Friday, December 20, the capsule launched on what was expected to be its final test mission before being used to transport humans into space. But the mission quickly went awry — and the problem appears to stem from the spacecraft’s own built-in timer.

The CST-100, short for Crew Space Transportation, took off Friday at 6:36 a.m. Eastern from Cape Canaveral Air Force Station in Florida. It was supposed to be the capsule’s first flight to the International Space Station. Packed with cargo and a dummy called “Rosie,” it was meant to demonstrate the Starliner’s suitability for future manned missions.

During the launch, the capsule experienced what the company termed “an off-nominal insertion.” The fault didn’t prevent it from reaching orbit, but it dashed Boeing’s hopes of the capsule making it to the space station.

Basically, the mission elapsed time system seems to have experienced an error. The error caused the vehicle to act incorrectly for a few vital moments after launch. The spacecraft tried to maintain a certain control and ended up burning through a lot of propellant in the process. The team couldn’t get a command signal to the craft in time to stop it, they said.

The timer has now been reset. Boeing’s plan now is to complete as many other test objectives as possible over the next few days, some of which could still involve the International Space Station. They plan to land the capsule in White Sands.

“It is important for us to build trust with the American taxpayer so we can continue to do these magnificent things,” NASA administrator Jim Bridenstine said at a press conference following the launch, explaining why the team was focused on quickly communicating the mission status. He went on to reassure reporters that “a lot of things went right.” Had crew been in the capsule for this mission, they would have been safe, he said.

The capsule was launched atop a United Launch Alliance Atlas V rocket. The Alabama-built rocket has completed 80 launches since 2002 and provides 1.6 million pounds of thrust at liftoff. Tory Bruno, CEO of United Launch Alliance, described the rocket as “uniquely configured” for this mission.

Amongst the cargo, Friday’s mission contained a test dummy dubbed “Rosie.” The dummy is named after Rosie the Riveter, the famous Second World War recruitment campaign star. The dummy is equipped with sensors to measure the pressure would-be astronauts would experience on the capsule.

Originally, the capsule was expected to complete an eight-day mission. Twenty-five hours after launch, the capsule would make contact with the space station and dock.

And 20 minutes in, everything seemed to be going to plan: The spacecraft separated from the rocket as expected. But nearly two hours after launch, the company issued a statement describing the current state:

The spacecraft currently is in a safe and stable configuration. Flight controllers have completed a successful initial burn and are assessing next steps.

Boeing and NASA are working together to review options for the test and mission opportunities available while the Starliner remains in orbit.

Boeing is working alongside SpaceX for NASA’s Commercial Crew Program. The initiative is designed to develop new means of transporting humans to and from the ISS.

Since NASA shuttered its Space Shuttle program in 2011, it has used Roscosmos’ Soyuz rockets to bring astronauts to and from the space station. The flights take off from the Baikonur Cosmodrome in Kazakhstan, and they don’t come cheap — seats are estimated to cost more than $80 million a pop.

NASA’s program would bring these flights closer to its base of operations — but it’s not been without its share of issues. The United States’ Government Accountability Office warned in June 2019 that both Boeing and SpaceX faced “chronic delays,” as neither firm was making enough progress ahead of planned deadlines.

SpaceX CEO Elon Musk claimed in 2018 that the firm would send humans into space by April 2019. The firm made big progress back in March 2019, when it successfully completed a “Demo-1” unmanned launch to the International Space Station packed with cargo. But a thruster failing in April and a parachute failure in May suggested the company still faced big issues. After a tense exchange of words between Musk and NASA administrator Jim Bridenstine, the pair appeared together in October 2019 to declare SpaceX plans to send humans into space by the first quarter of 2020.

Boeing’s CST-100 is designed to send up to seven crew members into low-Earth orbit. Trips to the ISS are expected to include four astronauts and research materials.

Prior to Friday’s launch, Boeing had successfully demonstrated its capsule’s capabilities at a smaller test launch. In November 2019, Boeing successfully tested its launch pad abort system. The test was held at the White Sands Missile Range in New Mexico at Launch Complex 32.

For its first manned mission, the Starliner is expected to send up Boeing astronaut Chris Ferguson, plus NASA astronauts Mike Fincke and Nicole Mann. Boeing planned ahead of the Friday launch to use different spacecraft for the unmanned and manned missions.

More like this
Science
Dec. 3, 2022
Opinion: Artemis should be the last NASA mission to send astronauts to the Moon
By The Conversation and Martin Rees
Science
Dec. 5, 2022
Artemis I is on its way home from the Moon — after flying just 80 miles over the lunar surface
By Doris Elín Urrutia
Science
Dec. 4, 2022
Scientists could use a meteor-hunting technique to uncover dark matter
By Allen Versfeld and Universe Today
Related Tags
Share: