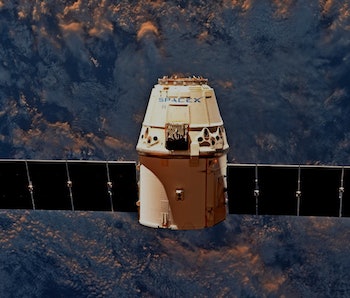 SpaceX’s next resupply mission could bring a whole host of curious creations to the International Space Station.

The 19th Commercial Resupply Mission, also known as CRS-19, is part of the company’s regular missions to transport cargo to the space station to assist with experiments. The mission, set to launch from the Cape Canaveral Air Force Station in Florida, will use a Dragon capsule on a Falcon 9 rocket to transport over 5,700 pounds of cargo, over 2,100 pounds of which will be scientific equipment.

Bryan Dansberry, an associate administrator of science at NASA, told reporters on November 20 in a conference attended by Space.com that the Dragon capsule is an “important component of space station delivery.” This is the penultimate resupply mission in the current $3 billion contract, but the agency has already agreed a new contract with SpaceX.

The launch is scheduled to take place at 12:51 p.m. Eastern time on December 4 from Space Launch Complex 40. The Dragon capsule used on this mission previously flew on the CRS-4 mission in September 2014 and the CRS-11 mission in June 2017. The latter mission was the first time SpaceX reused a capsule.

While the capsule on the CRS-19 mission as flown before, this will be the first launch for the B1059 Falcon 9 booster. Although the resupply mission originally planned to use the B1056 booster, which flew before on CRS-17 in May and CRS-18 in July, it’s now expected to be used for the JCSat-18 mission on December 16. SpaceX completed a static test fire of the new Falcon 9 booster on November 26.

Here are some of the most fascinating pieces of cargo set for liftoff:

Budweiser, the beer brand from Anheuser-Busch, is sending up barley seeds to understand how microgravity effects their growth. This is the fourth time that the firm has sent seeds up to the International Space Station.

The experiment is focused on understanding which genes are altered in space. The seeds will be germinated before entering the malting process. The team hopes to udnerstand how the environment can influence their growth.

Perhaps unfortunately for the astronauts on board, they won’t be able to sample the end result. Budweiser will analyze the malt back on Earth.

4. Atoms that could rewrite physics

NASA plans to send a number of ultra-cooled atoms at just beyond the absolute zero point, as part of the Cold Atom Lab. These are also known as Bose-Einstein condensates. Where the team can only observe these atoms for a split-second on Earth, the process slows to around 10 seconds in space. Researchers will be able to complete these experiments for six-and-a-half hours every day, remotely with no astronaut interference.

For one experiment, the team will look at rubidium and potassium atoms to test Einstein’s equivalence principle. This suggests gravity should affect objects in the same way. Finding a flaw could require rewriting the rules of physics.

The experiment will use the Quantum Core atomic system developed by Colorado-based firm ColdQuanta.

The Jackson Laboratory plans to send up 40 female mice to study how muscle mass develops. Some of these mice will lack the gene that helps produce myostatin, which develop more muscle mass. Because space accelerates muscle loss, the experiment should offer a faster means of understanding how myostatin changes bones and muscles, potentially finding a way to prevent diseases.

NASA’s Kennedy Space Center is sending up the CryoCybe 1, one of the three small “CubeSats” on board that will look at cryogenic fluid management. The deployable sunshield enables it to reach cryogenic temperatures in a satellite that measures just three units and weighs just 8.38 pounds. Managing cryogenic fluids is a key element of being able to send humans to Mars.

Case Western Reserve University, with support from the National Science Foundation, is sending an experiment that looks at confined combustion. This will study how flames spread in confined spaces like vehicles, which could pose more issues than open spaces as heat from the walls accelerates the process. Reducing gravity enables researchers to get a better look at the other ways the flames spread beyond gravity, induced movements, helping to understand the underlying forces at play.

More like this
Innovation
8.9.2022 2:00 PM
A small robot on the ISS will practice performing surgery in space
By Doris Elín Urrutia
Science
23 hours ago
45 years ago, the first Space Shuttle made history without going to space
By Allie Hutchison
Science
8.7.2022 11:00 PM
Russia leaving the ISS could put the station’s future in jeopardy
By Wendy Whitman Cobb and The Conversation
Related Tags
Share: