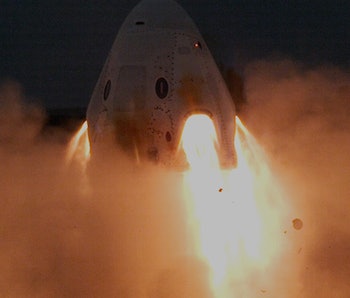 One small step for the Crew Dragon, one giant leap for NASA’s Commercial Crew Program.

SpaceX completed a full-duration static test fire Wednesday of the capsule’s launch escape system. It follows a previous attempt in April, which led to a severe failure and forced SpaceX to redesign some of the capsule’s components. The test’s success means the Crew Dragon has come another step closer to completing its in-flight abort test, which demonstrates that it can carry humans to safety in case of a launch gone awry.

It’s a welcome step forward for NASA’s program, which has tasked SpaceX and Boeing with developing a capsule that can ferry its astronauts to and from the International Space Station. Although designed to replace NASA’s existing contract with Russian space agency Roscosmos, delays in the program led the Government Accountability Office to urge NASA to come up with a plan B over the summer.

Once the in-flight abort test is complete, SpaceX can move onto preparing for the last major test of its capabilities. The “Demo-2” flight will see astronauts Robert Behnken and Douglas Hurley fly on the company’s first-ever manned mission. From there, Victor Glover and Michael Hopkins are set to fly in the Crew Dragon for the first non-test flight, kickstarting a new era in NASA history.

There are 16 Draco thrusters positioned around the capsule. These are designed for maneuvering during orbit, as well as controlling the capsule’s positioning during a re-entry. SpaceX explained in April 2013 that these are powered by nitrogen tetroxide and monomethylhydrazine, and capable of producing 90 pounds of thrust.

The capsule also has eight SuperDraco engines, designed to accelerate the capsule away from a Falcon 9 rocket at speed during a failed launch. Each engine produces around 16,000 pounds of thrust. These engines can move the capsule at up to 436 mph, or half a mile in 7.5 seconds.

The test started with two burns of two of the capsule’s 16 Draco thrusters, lasting one second each. This was followed by a full-duration firing of the eight SuperDraco engines, lasting nine seconds. Straight after the SuperDraco engines, stopped, the eight flaps closed and the two Draco thrusters fired instead. This latter process is aimed during a flight at orienting the Crew Dragon and closing the flaps in preparation for parachute deployment.

The successful test is a welcome move forward, especially after a failed test that went viral in April 2019. This was caused by nitrogen tetroxide liquid propellant in the helium pressurization system unexpectedly causing some titanium to ignite. The issue suddenly emerged around 100 milliseconds before the engines were ignited.

Following the failure, SpaceX redesigned a number of key components to reduce the chances of the propellant entering the pressurization system. This includes using burst disks instead of check valves to seal away.

From here, the team is now set to analyze the test data and continue progress toward an in-flight abort test. During that test, the capsule will be expected to initiate an abort procedure at max Q — the technical term for the moment in a launch when aerodynamic pressure is at its maximum, around one minute into the launch.

When the Falcon 9 rocket reaches that point, SpaceX will send a command to start the procedure. This should shut down the engines and engage the SuperDraco engines. If all goes to plan, the capsule should escape unscathed.

If SpaceX is able to demonstrate this capability successfully, it will lay the groundwork for actually flying humans in the capsule. From there, the company can start thinking about flying more humans on missions like a city on Mars.