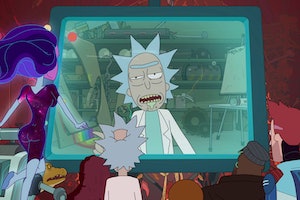 Shows like 'Rick and Morty': 10 lowbrow-brilliant series to stream in quarantine

What is it about Rick and Morty's uncanny alchemy that makes you love it so much? In many ways, there's nothing out there like this Adult Swim show, but its success probably has something to do with Justin Roiland's off-the-rails style of gonzo comedy tempered by Dan Harmon's keen sense of story structure. Together, these co-creators made a show that millions of people are obsessed with.

If you've already watched every episode a dozen times, you're probably wondering: What's there to stream out there if you love Rick and Morty and can't quite wait for the rest of Season 4?

In truth, there's nothing else quite like Rick and Morty, but because we don't know when the rest of Rick and Morty Season 4 might air, you're probably looking for all sorts of different things to stream that might be similar — especially as the novel coronavirus has forced everyone indoors as they practice social distancing.

For whatever reasons you might love Rick and Morty here are 11 other shows you might vibe with as your next binge-watch.

If there's one animated series right now that competes with Rick and Morty in terms of raw intelligence and crude humor, it's Big Mouth. Netflix's bizarre animated series from Nick Kroll, Andrew Goldberg, Mark Levin, and Jennifer Flackett is loosely based on Kroll and Goldberg's early years in suburban New York. Kroll even voices his fictionalized younger self.

Big Mouth has no rules, but the way it never shies away from the most graphic parts of puberty normalizes relatable parts of our lives that nobody ever wants to talk about. Even if you think Rick and Morty is better than Big Mouth, there's no denying this Netflix show is more relevant and important.

Doctor Who is the wholesome grandfather to most science fiction adventures on television today. Even Back to the Future, which served as the original inspiration for Rick and Morty, feels like a riff on the almost 60-year-old British sci-fi series about an alien who travels throughout all of time and space with regular people.

Season 12, which concluded in early March 2020, was a bit controversial but a real return to form. Often uneven, occasionally brilliant, and always interesting, Doctor Who might not be for Rick and Morty fans that like the show for its gritty nihilism, but if you like the general dynamic of Morty and Rick but wish everybody was a whole lot nicer to one another, then Doctor Who could lift your spirits quite a bit.

Created by Pendleton Ward, Adventure Time follows the oftentimes manic boy named Finn and his sarcastic shapeshifting dog-brother Jake. They travel the post-apocalyptic Land of Ooo in search of adventure and interact with all manner of monsters, princesses, creatures, and magic along the way.

In so many ways, the show feels like a 5-year-old whispering silly Dungeons & Dragons ideas to an adult who transforms these ideas into an animated show.

Carton Network and Adult Swim kind of have a specific target market cornered, and that's the intelligent millennial stoners who are so bored in the wee hours of the morning that they just want weird stuff to chuckle at. Shows like Adventure Time and Rick and Morty provide enough sensory delight in that regard, but they also manage to craft stories that are often elegant and mature, even if the visual aesthetic looks anything but.

Before he teamed up with Justin Roiland to make Rick and Morty, Dan Harmon was the showrunner on Community, a live-action ensemble comedy series featuring a group of adults who attend community college together in a fictional Colorado town. Every character seems typecast to fill a rigid archetype. There's the asshole former lawyer, the Christian single mother, the compulsive overachiever, the awkward film student, and several more. But over time, the ways these characters defy our expectations can be nothing short of brilliant.

Much like with Rick and Morty, Dan Harmon infuses Community with a litany of pop culture references that might seem dated when you go back and watch, but they're often used to build up the meta-humor that parodies the kinds of cliches you'd normally expect from a basic premise like this. Consider watching Community essential homework for all the real Rick and Morty fans out there.

The Simpsons creator Matt Groening's beloved sci-fi series follows the bumbling adventures of the lazy and, quite frankly, outright dumb Philip J. Fry. After an accident leaves him cryogenically frozen just after the turn of the century, he wakes up 1000 years later to a bizarre world full of mutants, aliens, robots, and all sorts of weird stuff. Except existence is more or less the same, and he still bumbles his way through life. Oftentimes inventive and always hilarious, Futurama is a must-watch.

Much like The Simpsons does with the nuclear family, Futurama deconstructs our preconceived notions about what friendship and love should look like in science fiction. If you view it in a certain way, Futurama died so that Rick and Morty could live. Futurama aired on Fox before an untimely cancelation and returned on Comedy Central years later. The series finale aired in September 2013, just a few months before Rick and Morty premiered on Adult Swim, marking a real shift in the zeitgeist in terms of what we look for in our sci-fi.

The premise of The Good Place is too ridiculous and too highbrow to have worked, and yet here we are in a world where it's one of the best shows in recent memory and one of my all-time favorites. Eleanor Shellstrop, who is by all accounts a pretty awful human being, wakes up in the afterlife in a picturesque but totally bizarre town with yogurt shops on every corner and Ted Danson in a suit grinning and twirling his way through every scene. Without giving away the series' big twist, I'll say that everything is not as it seems, but the four-season journey that the core cast of characters embarks on contemplates the nature of existence in profounds ways, grapples with ethics and morality, and helps anyone face the reality of death with a sense of dignity.

The world of The Good Place often feels colorful and cartoonish, like some kind of dream that's actually a nightmare in hiding, and the way it packages heady philosophical concepts in an easily digestible and totally charming package resonates on a similar frequency to Rick and Morty.

Netflix's BoJack Horseman comes up a lot in conversations about Rick and Morty, mainly because they're both ridiculous animated series made for adults that deal in totally bleak nihilistic humor — they've both also got cat people. No other show on this list really grapples with the (potential) misery of existence quite like BoJack Horseman.

BoJack is a washed-up horse actor in a world where anthropomorphic animals coexist alongside humans. Early episode are a bit grating, but the series really gets going by the end of its first season. The way it grapples with heavy themes like trauma and addiction, and the ways they can manifest in all manner of self-destructive behavior resonates with you on a deep, deep level. Who knew a giant horse could be so relatable?

If you were to say that Rick and Morty is so smart it's dumb at times, then Archer is the polar opposite. Ridiculous, asinine, offensive, and absurd, FX's Archer is one of the most off-the-rails animated shows in recent memory. The show began in 2009 with the title character Sterling Archer as a farcical alternative to a super-spy like James Bond, except Archer is a bit more honest about being a drunk and a womanizer — and we're not meant to admire him for it. Inside jokes and references abound with rapid-fire quips, and even when Archer is too quick for its own good, it's always good for a laugh.

In later seasons, the show assumed a more anthological approach, using the same characters and putting them in new circumstances through a series of soft reboots. Like many shows on this list, Archer also leans heavily on meta-comedy. If you like how poorly Rick treats everyone around him, then you'll love how Sterling mistreats his poor butler and all his hapless coworkers.

Call me crazy, but Apple TV's workplace comedy set inside a video game development studio with a megalomaniac creative director and a quirky supporting cast feels a lot like a more humane Rick and Morty in some odd ways. The title Mythic Quest: Raven's Banquet refers to the name of a fictional MMORPG akin to World of Warcraft with a bit more verve that's immensely popular.

As the boss, Rob McElhenney's Ian Grimm is rude and dismissive of everyone with an ego almost as big as Rick Sanchez, but he also has a keen sense of his own humanity (like Rick at his best). The game's executive producer is a bumbling and unsure Jerry/Morty type who's always worth laughing at. Charlotte Nicdao's Poppy Li is the lead engineer, a brilliant and dorky woman who's often the smartest person in the room. Overall, the series is much deeper than it seems at first, with a lot of nuanced meta-analysis about the gaming industry at large.

HBO's latest situational comedy from Veep creator Armando Iannucci bears a striking resemblance to the crass political comedy, except his new show, Avenue 5, is something close to hard sci-fi. On a luxury cruise ship in space, something goes horribly wrong and a journey meant to take a few months turns into a few years. That's just the first of many mishaps that drives the middle- to upper-class passengers of the near future into an insult-filled frenzy.

More like this
Entertainment
Feb. 5, 2023
Rick and Morty Season 7 Needs to Steal the Best Doctor Who Trick
By Corey Plante
Entertainment
Jan. 25, 2023
Rick and Morty can survive without Justin Roiland
By Dais Johnston
Culture
Feb. 4, 2023
If you loved Nick Offerman in The Last of Us, check out the series he starred in right before the world shut down
By Dais Johnston
LEARN SOMETHING NEW EVERY DAY.
Related Tags
Share: