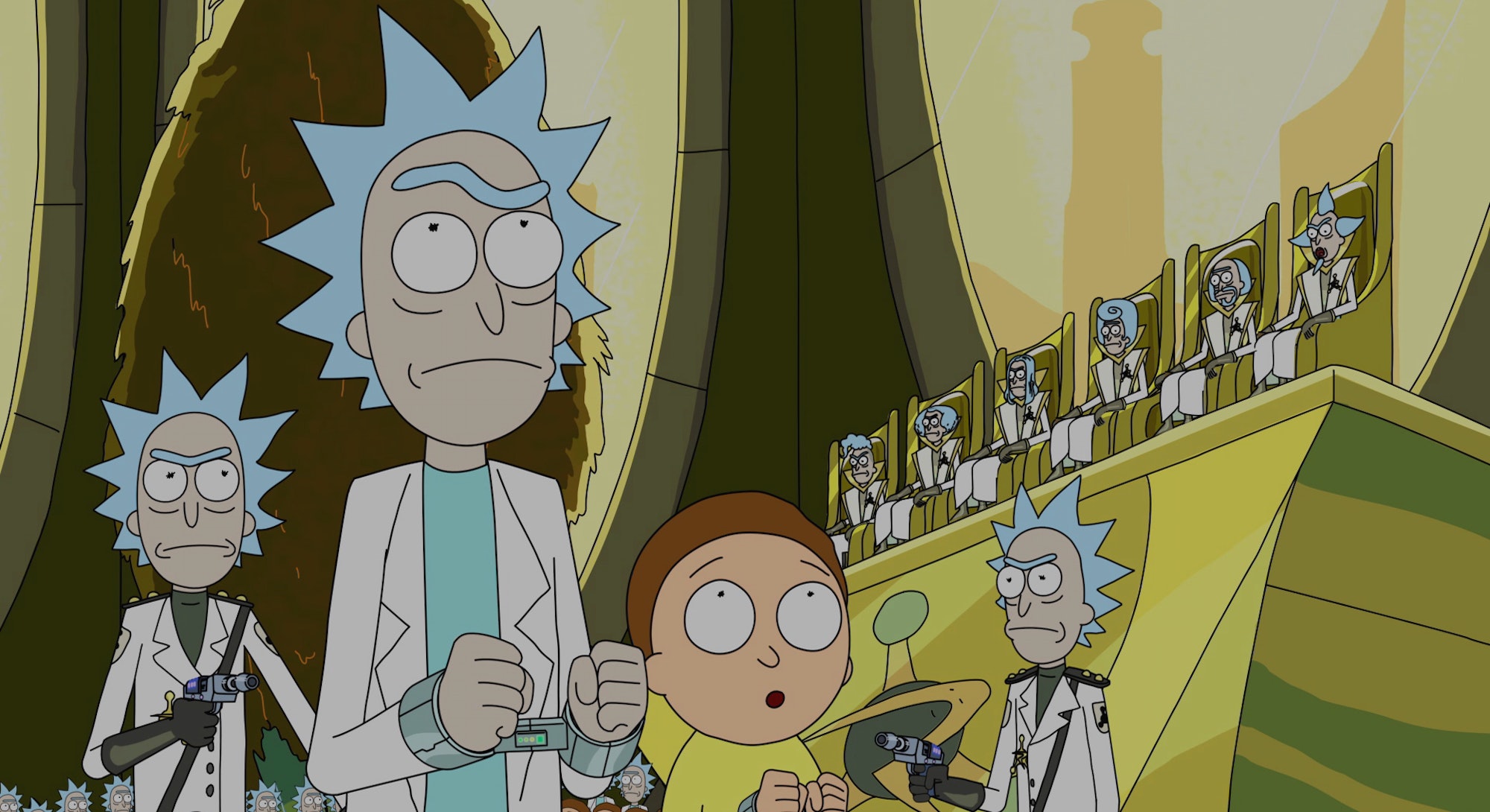 In terms of Rick and Morty world-building, nothing beats “Close Rick-Counters of the Rick Kind” — at least in Season 1. It’s the story where we learn about the Citadel and Council of Ricks, get a dizzying display of the show’s infinite realities concept, and (most importantly) meet Evil Morty. In short, “Close Rick-Counters of the Rick Kind” is an excellent episode that far surpasses the actual Season 1 finale “Ricksy Business.”

Maybe the season should’ve ended here instead? “Ricksy Business” does function as a two-parter with the Season 1 premiere, “A Rickle in Time,” but whereas both of those episodes are merely good, “Close Rick-Counters of the Rick Kind” is great.

“Close Rick-Counters of the Rick Kind” demonstrates, in ridiculous fashion, exactly what infinite timelines really means for Rick and Morty. Much like how the vast size of the actual universe is virtually impossible to comprehend, infinite variations across infinite realities isn’t something we can truly imagine until we see sentient furniture using pizza to call for an order of phones to eat all while sitting on people.

They call it Furniture Universe and none of it makes any measure of coherent sense.

How did sentient life evolve into furniture? How do they even digest phones? Why do all the people being sat upon have such a void expression on their faces? Asking questions about this and trying to make sense of it all is enough to warrant a migraine. But it also serves as the perfect example of how Rick and Morty can be so stupid that it’s goddamn brilliant, dragging us to the edge of comprehension and then pushing us a step further towards insanity.

"Yeah, I’d like to order one large phone with extra phones please.

The Furniture Universe is a fun joke, but the truly compelling way the show’s writers and creators grapple with the importance of the Rick and Morty multiverse in this episode is by introducing thousands of alt-reality Mortys and Ricks at the Citadel.

A few thousand versions of Morty and Rick band together to create their own society focused on self-preservation. What could go wrong? Unsurprisingly, our Rick has a history of noncompliance with the Council, who send a team of doppelganger soldiers to abduct him when 27 different Ricks wind up dead from… “Rickicide.”

The fact that nobody directly addresses this Rick’s specific unfortunate end only makes it even more amusing. But Rick C137, the Rickest Rick around, easily escapes.

An extended chase scene ensues through increasingly bizarre dimensions, including one made entirely of giant farting butts. This one scene is perhaps the most densely-packed sequence, and it perfectly demonstrates the implications of infinite realities.

While inventing a way to track down the real villain of this whole debacle, Rick also drops a bombshell that questions the fundamental premise of the show.

Why would a genius like Rick even bother traveling around with a grandson that he seemingly can’t stand? Rick claims that in order to make his genius-level brainwaves undetectable, he needs Morty’s non-genius brain waves. This also explains why thousands of Ricks and Mortys partner up on the Citadel.

Morty accurately calls himself a “human cloaking device” and it creates a rift between grandfather and grandson, especially when this whole premise is seemingly confirmed when they head to a villainous lair, where hundreds of Mortys are strapped to the outer wall and endure constant torture.

When Rick’s captured and an Evil Rick explores his memories, Rick tears up when thinking about Morty. It’s one of the very few times we get even a taste of fan service from the show’s writers because the viewer craves Rick’s love for Morty almost as much as Morty himself does. The tender memories are quickly undercut by a fast-paced raid from Citadel troops that discover Evil Rick was a robot all along, and only the viewer sees a Morty with an eyepatch walk away with the transmitter.

“Close Rick-Counters of the Rick Kind” dazzles by doing everything right. Every character (with the exception of Summer) gets a subplot of growth, and the lightning-fast jokes just keep flowing. But the last legacy of this episode has everything to do with its universe-building — or should we call it multiverse-building?

Rick and Morty is notorious for abandoning plotlines, and it seldom revisits former characters for anything beyond a brief cameo. And other than each season premiere addressing the events of the preceding finale, virtually no stories in the Rick and Morty universe get revisited. “Close Rick-Counters” is the glaring reception.

Not only do we revisit the Citadel in the Season 3 premiere, “The Rickshank Redemption,” but “Tales From the Citadel” came later that season, almost a full three-and-a-half years after “Close Rick-Counters of the Rick Kind” first aired. That excellent bottle episode focuses on smaller vignettes featuring citizens of the Citadel, but it ends with the culminating revelation that the same Evil Morty rose to power in a democratic election and executed all opposers, effectively establishing himself as a new dictator.

Even though it took years to revisit this plot, “Tales From the Citadel” is perhaps the greatest Rick and Morty episode ever to the extent that it also elevates “Close Rick-Counters of the Rick Kind” that much more.

We can only assume that Rick and Morty co-creators Dan Harmon and Justin Roiland didn’t specifically plan out a three-season arc. But in an alternate reality from our own, the best-rated comedy on television would be even better if the Season 1 and Season 3 finales were the episodes that focused on the Citadel rather than low-stakes lesser stories like “The Rickchurian Mortydate.”

I’d be remiss if I didn’t give at least a glancing note about Doofus Rick in this episode.

A hilarious subplot follows the budding bromance of Jerry C137 and Rick J19 Zeta 7, otherwise known as “Doofus Rick.” Every other Rick treats him terribly — just like they do Jerrys — and they even claim that Doofus Rick comes from a universe where they all eat their own poop.

Mutual hate for Rick drives Jerry and Doofus Rick together. The latter is even impressed with Jerry’s advertising work. “Advertising? Wow!” Doofus Rick says, “So, people need help figuring out what to buy and then y-you help them?”

Doofus Rick represents the opposite of everything that makes Rick Rick. Whereas pretty much every other Rick we ever encounter in the show is both brilliant and cruel to everyone (excluding Beth), this Rick is notoriously unintelligent and charmingly kind. He’s a light foil that highlights how Rick is pretty much the villain of every story.

So why do we love him so much?