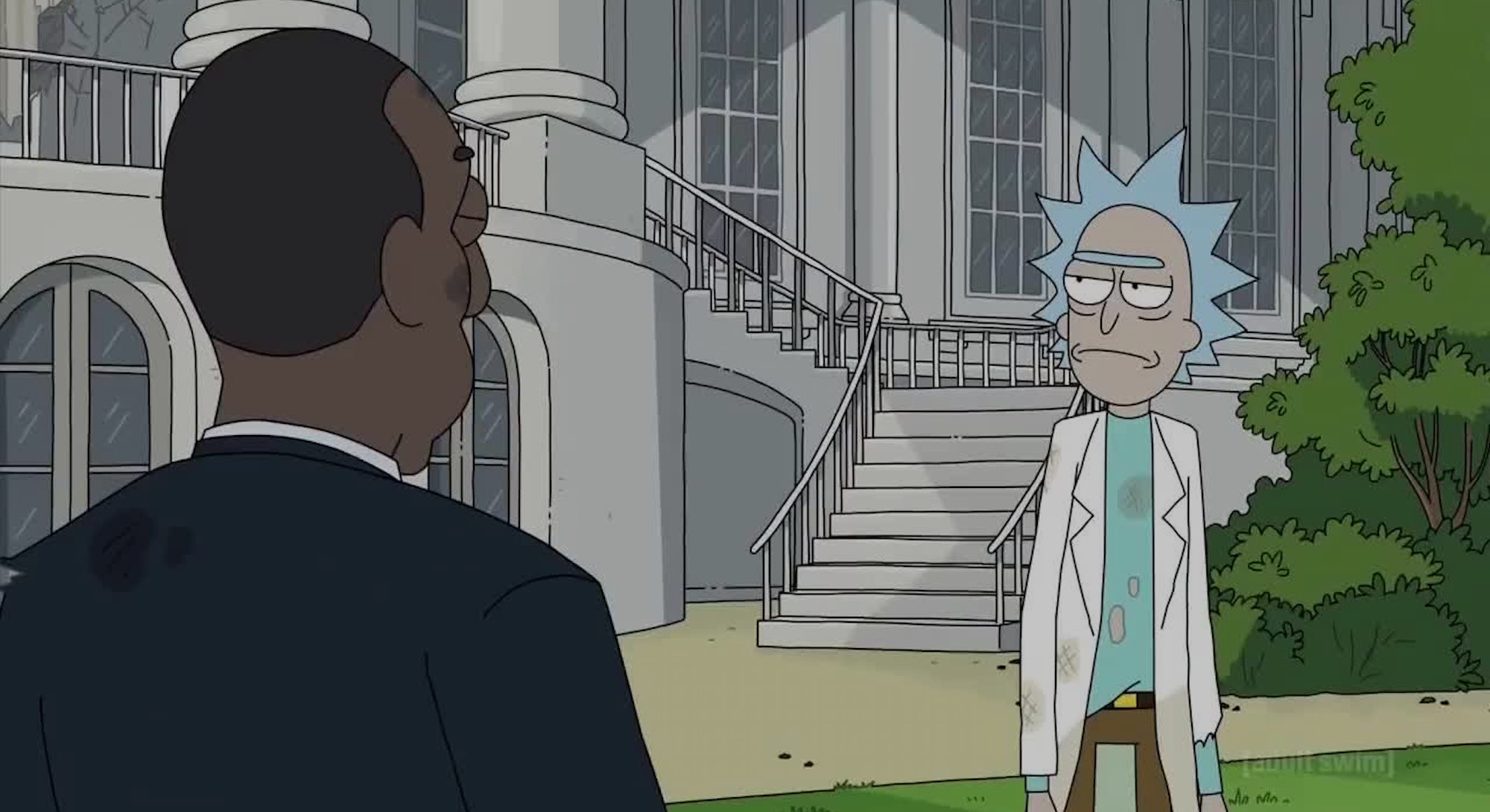 At the beginning of the Rick and Morty Season 3 finale, “The Rickchurian Mortydate,” the titular duo commiserate in the Kennedy Sex Tunnels under the White House, lamenting how the President of the United States treats “them like Ghostbusters.” When they ditch to go play Minecraft, one Secret Service agent says, “Tell [the President] Rick and Morty just blew off America.” And you know what? America deserves it.

“The Rickchurian Mortydate” is an episode that works incredibly well as a standalone narrative in its A-Plot of Rick versus the President, but it sort of fails as a season finale when a stunted B-Plot resurfaces about Beth wondering whether or not she’s a clone. The whole thing just sort of ends, Beth and Jerry get back together, and Rick and Morty presses the soft reboot button by making everyone in the family happy except for Rick. If the whole vibe feels a bit off, there’s an explanation.

Shortly before this episode originally aired on October 1, 2017, Dan Harmon explained to Entertainment Weekly that Episode 10 wasn’t originally intended as the finale.

“I don’t want to poison the well,” he said, “but the finale is a great episode that we finale-ified when we realized we weren’t going to be able to make 14.” Unfortunately, finale-fying this episode makes it feel a bit stunted, narratively speaking.

In his first appearance, POTUS is enthusiastic, cooperative, and even friendly, but by the end of Season 3, he’s turned into a ludicrous manchild undeserving of his title.

It’s almost like they’re completely different people, like Rick and Morty went for its most subversively political stunt ever. “The Rickchurian Mortydate” is as anti-Trump as it comes, and hardly anybody recognizes it because the president we see in that episode is so different from the one we met two years earlier. But maybe that’s the point.

“You lying dicks! I see your asses playing Minecraft! I got you on satellite! That’s right. What do you have to say for yourselves?”

Side note: Some of the episode’s best jokes come at the expense of Minecraft — and Jerry, of course.

“So you’re mining stuff to craft with and crafting stuff to mine with,” Rick says to Morty as he plays Minecraft. “Did your dad write this game?”

Later, when Rick criticizes the reductive gameplay of Minecraft, Morty says, “You’re not gonna have fun if you analyze everything.” This is yet another brilliantly subversive instance of the Rick and Morty writers talking directly to its fanbase, negging them for their propensity to overanalyze a very silly show.

We first meet the president in “Get Schwifty,” which aired in August 2015. That means it was written months earlier, during the peak of the Obama presidency, and that’s reflected in the world of Rick and Morty — even if this fictional president isn’t meant to be an exact Obama stand-in. So what happened to the fictional president when he returned to the show more than two years later?

The president comes off as a petulant manbaby who can’t take criticism or disobedience. He uses all sorts of illegal technology, including an invasive spy satellite. He proudly rattles off secret, vile locations in the White House — “In order of National Embarrassment: the Kennedy Sex Tunnels, Truman Cocaine Lounge, McKinley Hooker Dump, and Lincoln Slave Coliseum.” When he calls Morty on his cell phone, the screen reads, “FAILURE TO ANSWER IS A FELONY OFFENSE.” (Did Rick and Morty predict the Presidential Alert text message that went out across the U.S. last week?)

Rick and Morty co-creator Dan Harmon confirmed to The Wrap in September 2017 that Donald Trump was still campaigning when they were writing the end of Season 3. The Rick and Morty writing team hadn’t yet grown accustomed to Trump’s America or what kind of president he’d eventually become. But the idea of a cartoonishly bad president was obviously on their minds as the political climate surrounding Trump surged in the months leading towards the election. By the time “The Rickchurian Mortydate,” Trump had been in office for almost a year.

Before Rick and Morty willfully “blow off America” to go play Minecraft, Morty suggests that they talk to the president about setting some boundaries. “Yeah that sounds fun,” Rick says. “Let’s set some boundaries with a spoiled control freak that thinks he runs then bring about bring about world and orders drone strikes to cope with his insecurity.” When POTUS later reads the transcript of their conversation, he considers drone-striking them.

That’s when Rick and Morty dump the president over the phone and they go their separate ways, entering a very weird kind of sci-fi Cold War that lasts barely a minute after both parties converge on a tiny, nuclear-capable civilization discovered in the jungles of Brazil.

The ridiculous turn of events that ensues only further demonstrates the president’s ineptitudes — he needs Rick and Morty. All of the technology POTUS has access to looks like a cheap imitation, including pill-based ‘70s-style shrinking and a barely mobile, wildly impractical massive blue portal. Rick and Morty solve the problem before it starts, and then bring about world peace by creating the “Pretty Obvious When You Think About It Accords” between Israel and Palestine after smoking perspective-enhancing alien pheromones through a laser hookah — all just to stick it to the president.

Politics aside, the real beauty of this episode comes from its spectacular third act and the escalating sci-fi conflict between POTUS and Rick. We see an entire arsenal of new personal defense gadgets at Rick’s disposal, including a reflector shield that repels bullets, some kind of arc-laser whip, and an unseen device that kills one guard as soon as he touches Rick.

The president has his own incredible weapons to match, like an anti-gravity gun and even an orbital satellite laser he controls with his watch. Things get even nuttier in the Truman Cocaine Lounge, where POTUS summons creepy, whistle-controlled children and a personal mecha. In response, Rick uses a hologram duplicator and some kind of pop-out bo staff.

It’s perhaps the single greatest action sequence in Rick and Morty history, which is why it’s that much more of a letdown when it just sort of ends on the White House lawn after Rick loses interest. Much like Season 3 as a whole, this battle is over much too soon.

It can be tough to imagine who will occupy the oval office by the time the show returns for Season 4, but based on “The Rickchurian Mortydate” (and “Get Schwifty” before it) you can count on the president of Rick and Morty to reflect the one we’re dealing with in real life at the time.