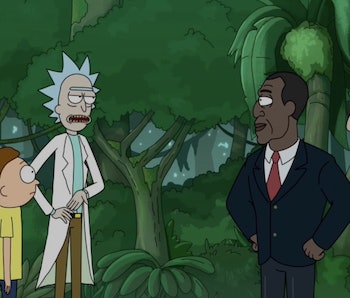 Rather than end Rick and Morty’s third season on a universe-altering note like they did last season, “The Rickchurian Mortydate” has our heroes try to end their tenuous relationship with the president of the United States — and that’s about it. Rick and Morty are tired of being treated like a couple of oddball Ghostbusters randomly getting phoned in to bust some ghosts (or aliens) for the federal government.

To have a story like this dominate the end to Rick and Morty’s most important season yet seems like an odd choice, especially considering the huge cliffhanger at the end of Season 2. Nonetheless, it delivers on a fun and action-packed episode that feels less dark than much of this season.

The Rick and Morty frenzy peaked with the surprise Season 3 premiere and only got bigger. Newsweek announced in late September that Rick and Morty was the top-rated comedy on television, coming in ahead of Modern Family, The Big Bang Theory, and Saturday Night Live.

“The Rickchurian Mortydate” was a solid, fun adventure, but it did little more than offer a soft reboot for the series.

“The Rickchurian Mortydate” expands upon Rick and Morty’s complicated history with Keith David’s president of the United States that we first saw in “Get Schwifty.”

After Rick and Morty realize they’d rather play VR Minecraft than root out an alien pest plaguing the Kennedy sex dungeons, it’s time to break up with the president. The raging, petulant egomaniac sees this as an affront, resulting in a mutually petty dynamic. The president is sad and bitter, especially after Rick and Morty solve the Israeli-Palestinian conflict just to spite him. They take political leaders to a Star Wars cantina and have everyone smoke a “perspective-enhancing alien laser hookah.” It works.

The show leans heavily on typical breakup tropes that make the president look like an emotional teenager listening to sad music after he gets dumped. Eventually, he grows angry. As he and Rick berate one another over the presidential selfie that Morty so desperately wants, things escalate into murder in the Oval Office.

The inevitable brawl between Rick and the president is the high point of the episode: Rick’s watch emits whippy lasers and can also project duplicates of his body. POTUS has a mecha with missile launchers and rabid children that attack Rick (don’t ask). By the time it descends into all-out fisticuffs on the lawn, Rick loses steam. He realizes that Morty’s disappeared with the portal gun. The B-plot caught up to him, and Rick’s gone and alienated his family more than usual.

In last week’s adventure to Froopyland, Beth connected with her father in unprecedented ways. Rick’s offer at the end of the episode was to make a clone of her that could take her place while she disappeared to travel the universe. The offer seemed tempting, but she seemingly decided to stick around.

Beth sort of has a new lease on life. Even Summer loves the new Beth, but she eventually breaks down in an existential crisis after realizing that she could now be a clone with all the same memories. So she’s afraid Rick might come to kill her — he implies as much — which is why Morty ditches to protect his mom rather than back Rick up.

Beth is overwhelmed by Rick’s crazy world, so she seeks the confirmation of the “simple” Jerry, and the two of them get back together.

Rather than ditch for any among an infinite number of universes, Rick decides to reconcile with both the president and his family so he can stick around. He’s not happy at all to have Jerry back in his everyday life, but this is Rick and Morty returning to its previous status quo.

Per usual, Rick and Morty offers up some meta-commentary in its final scene over the dinner table as Beth says, “We’re a real family now. In many ways, things will be like Season 1 but more streamlined. Now Jerry and I are happily married parents, and the idea that I was motivated by a fear of you leaving can be eschewed.”

So there you have it, a super-soft reboot brings Rick and Morty back to square one for Season 4.