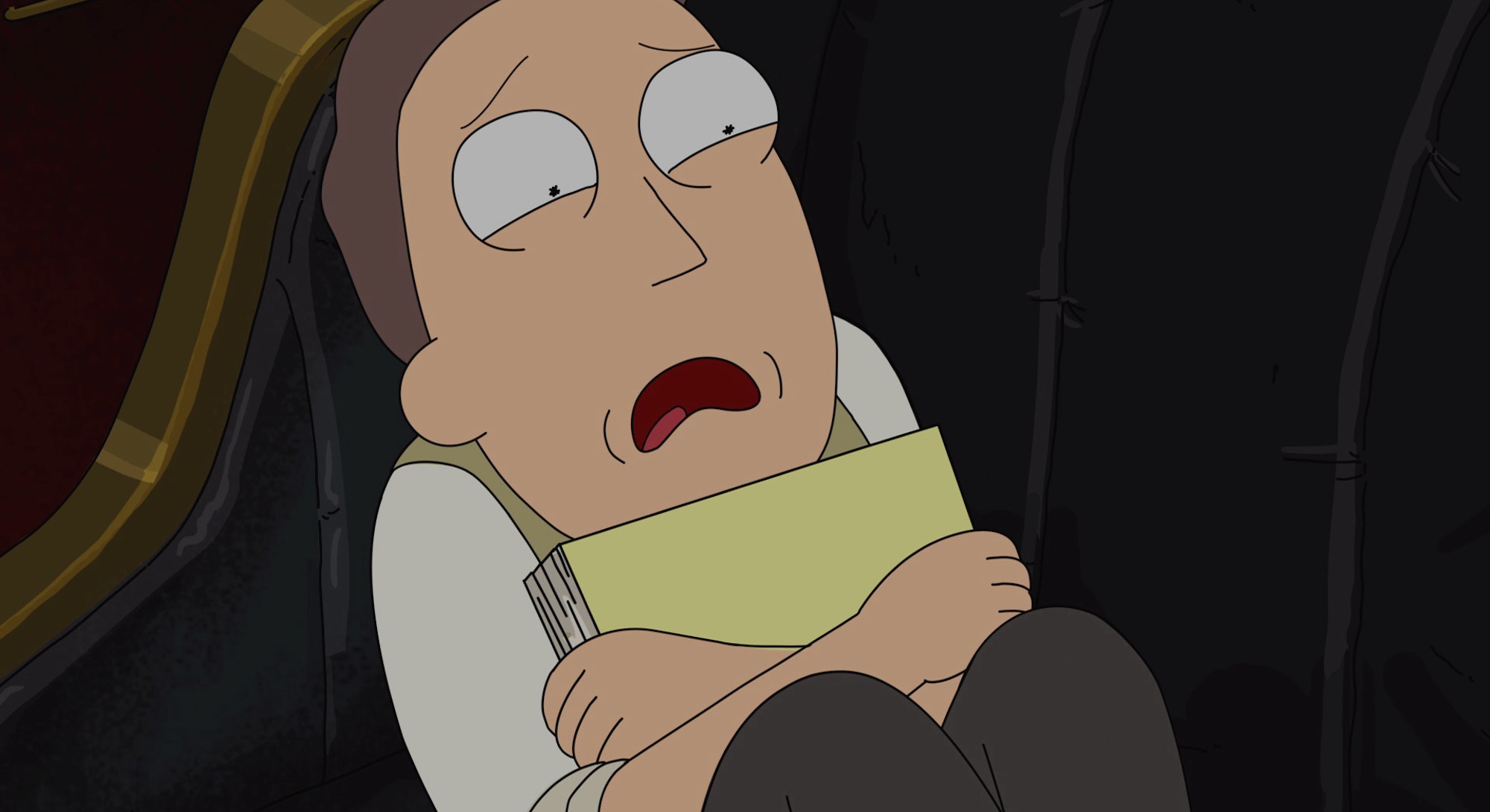 Rick and Morty has always pushed the envelope with its brand of adult comedy, but when does shock humor go from subversive to straight-up offensive? We might have an answer with the Season 1 finale, “Ricksy Business.”

This episode is memorable mostly because Rick, Summer, and Morty to throw a house party when Jerry and Beth leave for a romantic getaway. But there’s a throwaway line near the end that comes off as fairly problematic, even for such a boundary-breaking show. It’s one that could totally change the way fans look at the show’s least-beloved character, Jerry Smith.

The “Ricksy Business” B-plot has Beth and Jerry attempt to rekindle their marriage by going on a Titanic recreation cruise that’s “un-unsinkable.”

As soon as they get aboard the ship, Jerry wants to do all the basic AF things like waiting in a long line just to take a photo at the bow of the ship. (He showed up in period attire for this very reason.) Beth just wants to relax with a book and a margarita, and could you blame her? There’s a reason why these two are the opposite of #couplegoals. Beth abandons Jerry, so he’s left to couple-up with an older maid named Lucy. We’re meant to laugh at how lame Jerry is and his fake romance with Lucy — until she tries to rape Jerry at gunpoint in an old car to recreate that scene from Titanic.

After Beth saves Jerry, she makes a comment about how Lucy didn’t seem the type.

“What does a rapist look like exactly Beth!?” Jerry says. “Is it a Slavic man wearing a denim jacket with a patchy beard and the scent of cheap champagne wafting over his blister-pocked lips…?”

Wait a second. Was Jerry raped?

The details are so explicit that we can safely assume that Jerry was once the victim of sexual assault. We’re led to believe that his meekness is a result of this trauma. The Rick and Morty writers essentially use it as a punchline, which can seem a bit problematic when Jerry is consistently painted as a pathetic loser. His intelligent wife often belittles him, his children don’t respect him, and his father-in-law constantly undermines his authority.

In Season 3, Rick diagnoses Jerry as some kind of emotional parasite, saying:

“You act like prey, but you’re a predator! You use pity to lure in your victims! That’s how you survive! I survive because I know everything. That snakes survives because children wander off, and you survive because people think, ‘Oh, this poor piece of [bleep]. He never gets a break. I can’t stand the deafening silent wails of his wilting soul. I guess I’ll hire him or marry him.’”

So essentially Jerry is a pathetic because he’s a victim? That’s a bit too problematic, even for Rick and Morty.

It’s perhaps a blessing that this questionable, failed joke doesn’t happen until the very end of the episode, because most of what happens during the party at the Smith house is pretty fun.

The episode right before “Ricksy Business,” “Close Rick-Counters of the Rick Kind,” is hugely important to the show’s canon, introducing us to the Council of Ricks, the Citadel, and Evil Morty. So for Rick and Morty to pivot towards something much more trivial for the Season 1 finale feels like a slight misstep.

“Ricksy Business” goes all-in on the typical premise of kids having a party when the parents leave for the weekend, but because this is Rick and Morty, Rick invites tons of aliens and insane sci-fi stuff happens.

Rick initially pokes fun at Summer for wanting to throw a party to increase her popularity at school. He scoffs at her idea … but only because he’s throwing an even better party. Summer wants to increase her social standing with the cool kids. Rick just wants to get “riggity riggity wrecked!” Watching them bicker without parental supervision is pretty delightful.

Summer’s often at her best when she’s dismissive of Morty and Rick’s adventures, like in “Ricksy Business” when she laughs at Rick, scoffing, “Are some glip glops from the third dimensions gonna come over and play cards or something?” The joke pays off doubly so when a ton of aliens show up and Rick refers to them as “glip glops,” but they don’t play cards.

Eventually, the plot gets ripped right out Doctor Who episode “Smith and Jones,” where an entire hospital is transported to the Moon. But instead of a cheeky story full of puns about doctors and the Doctor, this one has partygoers aplenty die, including Abradolf Lincler — a cloned hybrid of Abraham Lincoln and Adolf Hitler — who sacrifices himself in a moment of melodrama. Rick doesn’t give AF, though, and neither does the viewer.

So don’t watch “Ricksy Business” for an interesting plot or clever characters. Watch it for the hilarious one-off jokes, like Rick’s love of canapés.

It’s also simply amazing that all of these high-schoolers just go along with it when a bunch of small jelly aliens show up, or when one alien devours another inside the house. Tammy and Birdperson getting together is a perfect example of this, and the payoff that happens in the Season 2 finale at their horrible wedding (arguably the only truly great season finale the show has done) is worth it.

“Ricksy Business” also presents viewers with peak Morty: totally anxious and overwhelmed not just because he’s dealing with tons of alien sci-fi threats, but because all this shit is happening in his house. Always preoccupied with following the rules and desperate to please his parents enough that they might actually become a little bit happy, Morty spends much of the party picking up after the guests. But when a sick alien barfs acid after making sex jiggles in Beth and Jerry’s bed, Morty draws a line and confronts Rick.

That’s when we get the other side, to peak Morty. Jessica shows up and he instantly redirects all his focus towards awkwardly making a pass at her. Things go from bad to worse, and it’s all Morty’s fault. When he bumps into the wrong gadget, it teleports the entire house to a faraway planet with an oxygen-rich atmosphere, of course.

Rick gets super high on Collaxion Crystals, a few random characters die, and Rick does a group dance number. “The Rick Dance” song is better than any other song performance on the show, including “Get Schwifty” and that rap from Logic.

Despite one great song, some great jokes, and an important plot point, “Risky Business” definitely doesn’t rank among the best Rick and Morty episodes — especially because of how it mistreats poor Jerry Smith.

Related Video: “When Jerry Gets a Story Circle on ‘Rick and Morty’, It Destroys the Universe”