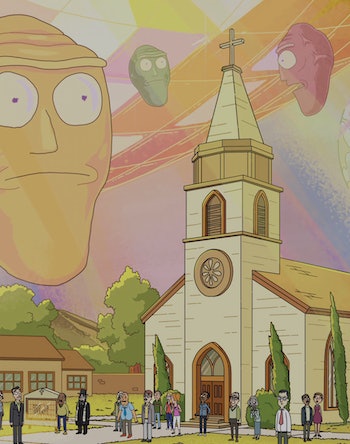 Most science fiction shows have their mediocre filler episodes, but when it happens to Rick and Morty, it feels like a disaster. The creators behind Game of Thrones might’ve dubbed Rick and Morty “the best writing of 2017”, but back in 2015, the writing behind an episode called “Get Schwifty” was some of the worst. The episode opts for sheer absurdity at every plot point rather than doing anything clever or interesting. Yet, when you learn exactly how the episode came to be, there’s at least some kind of an explanation for exactly how this bad episode came about. Are explanations the same as excuses? We’re about to find out.

The action of “Get Schwifty” kicks off when giant heads arrive on Earth, causing all sorts of natural disasters, demanding in a monotone voice: “Show me what you got.” Earth is then forced into a reality television show in which these moon-sized heads — an alien race called the Cromulons — force entire planets to compete in a musical competition. Only one planet will become “Planet Music!”

The monotone voice of the Cromulons acts as a deliberate piece of dramatic irony because, despite their obsession with it, these aliens have terrible taste in music. They enjoy “Get Schwifty” the song, which is indisputably terrible. Morty and Rick sing the titular song off-the-cuff after the Cromulon’s cause an earthquake at the Grammy Awards, resulting in the death of every major musician. Rick is their only hope, and Earth’s savior comes up with this banger:

“Take off your pants and your panties. / Shit on the floor. / It’s time to get schwifty in here.”

At the end of the episode, a new ditty called “Head Bent Over” almost wins the entire competition, and it’s perhaps even worse:

On some level “Get Schwifty” successfully pulls off a bland satire on reality TV culture. But Doctor Who did it way better in 2005 with “Bad Wolf.” Making fun of reality TV, in general, feels a bit tired here in 2018.

If you think nature and structure of this episode just feels like a shrine built to worship “Get Schwifty” the song, then you are correct. This weird plot was forcibly written so the creative team could put the song on display.

In a May 30 interview with GQ, Rick and Morty co-creator Dan Harmon reiterated a story about how the “Get Schwifty” song came long before the episode. Justin Roiland — who voices both title characters on the show — had recorded a few short song demos for an interactive Rick and Morty video game. Anecdotally, the show’s creative team latched onto “Get Schwifty” (the song) as a funny in-joke. Eventually, they constructed a music-focused episode just so they could include the song on the show. Season 2’s team of writers probably loved putting the tune on display, but we shouldn’t because it’s totally absurd and crass AF. And it’s plain bad. (Hey, maybe that’s the point.)

Sure, the “Get Schwifty” song made it onto Billboard’s Top 100 after the episode aired, but so did Rebecca Black’s “Friday.” So is that chart really an effective gauge of “good” music?

Everything about this episode, Cromulons included, is totally tone deaf. The plot aims for lunacy and idiocy all to worship Rick and Morty at its most asinine.

Any potential character development for the show’s characters — even Morty, who learns that abandoning his grandpa is “considered a ‘dick move’ in Bird-culture” — gets lost in the painful haze of awful music.

The entire B-Plot is a single punchline strung along for perhaps ten minutes of screentime, as the rest of the Smith family and the surrounding community get swept up in a feeling of religious zealotry as a “Headism” cult emerges to supplant all other organized religions.

Principal Gene Vagina paves the way and becomes the Pope, pledging himself to the “new god,” the heads in the sky that “control the fucking weather!”

At every new beat in the A-Plot, the ignorant masses in the B-Plot incorrectly attribute their worship or lack thereof to what’s behind cosmic events. Criticizing organized religion by portraying average people as hopelessly ignorant feels like yet another cheap, lazy shot at social commentary here, with the other in this episode being a generic satire of reality TV.

On both accounts, there are no layers of intelligent nuance or subversive context to provoke more compelling thought. There are no great jokes or cool gadgets. There are just stupid people worshipping false idols, which themselves are equally as stupid talking heads — and then Rick inexplicably drops snakes out of his pants.

Where is the symbolism and subtlety? Rick and Morty’s strongest stories are always ridiculous and often offensive, but they tell stories in innovative, smart ways. This is not Rick and Morty at its best. This is Rick and Morty trolling you with its worst, daring you to still love it.

If there’s a compelling analysis to be found, it’s that the Cromulons are literal talking heads, demanding and consuming bland entertainment with a monotonous voice, carelessly blasting entire planets into oblivion when displeased. If we’re meant to see this as a comment on media consumers or even critics, the episode doesn’t do enough to get us there.

Scant pieces of dialogue throughout this episode are lightly funny, but like many early episodes, Summer and her parents just feel like puppets that hardly matter. They’re painfully oversimplified and the butt-end of the show’s jokes, which plagues the show’s worst episodes, including “Raising Gazorpazorp.”

One of the episode’s few strengths comes from the debut of Keith David’s President of the United States, an ally that inexplicably became a villain in the Season 3 finale and sort of ruined the character. But here, he’s a delight as one of the show’s all-time best guest stars.

Another highlight is a subplot revealing that Ice-T in this universe is actually an ageless wandering alien that’s literally made out of ice. Over time, this episode transforms a decent visual pun into a multilayered, evolving joke that effectively dramatizes how ridiculous it is that anybody calls themselves “Ice-T.” Here, the Ice-T parody is done with love. (Dan Harmon is a big Ice-T fan, and Harmon’s parody impression of Ice-T is funny enough to warrant its own follow-up episode.)

Eventually, it’s Ice-T who nearly sacrifices himself to save Earth from being destroyed. The Cromulon’s giant laser beam get deflected by a giant talking ice cube wearing a gun necklace.

Taking a bad pun and transforming it into both the episode’s objective correlative and its deus ex machina is funny, but taking cheap, juvenile shots at criticizing religion and reality TV are not. We’ve all seen Rick and Morty do so much better, like in this episode’s post-credits scene that takes the whole “Ice-T” alien letter pun joke to new heights:

Ultimately, the episode itself serves as a great way to understand how Rick and Morty gets made: several people sit around, spitballing silly ideas (some of them totally dumb), and sometimes, the bad ideas get made. Statistically, in an infinite universe of infinite variation, plenty of Rick and Morty episodes should be bad, right?

There’s nowhere to go but up from here.