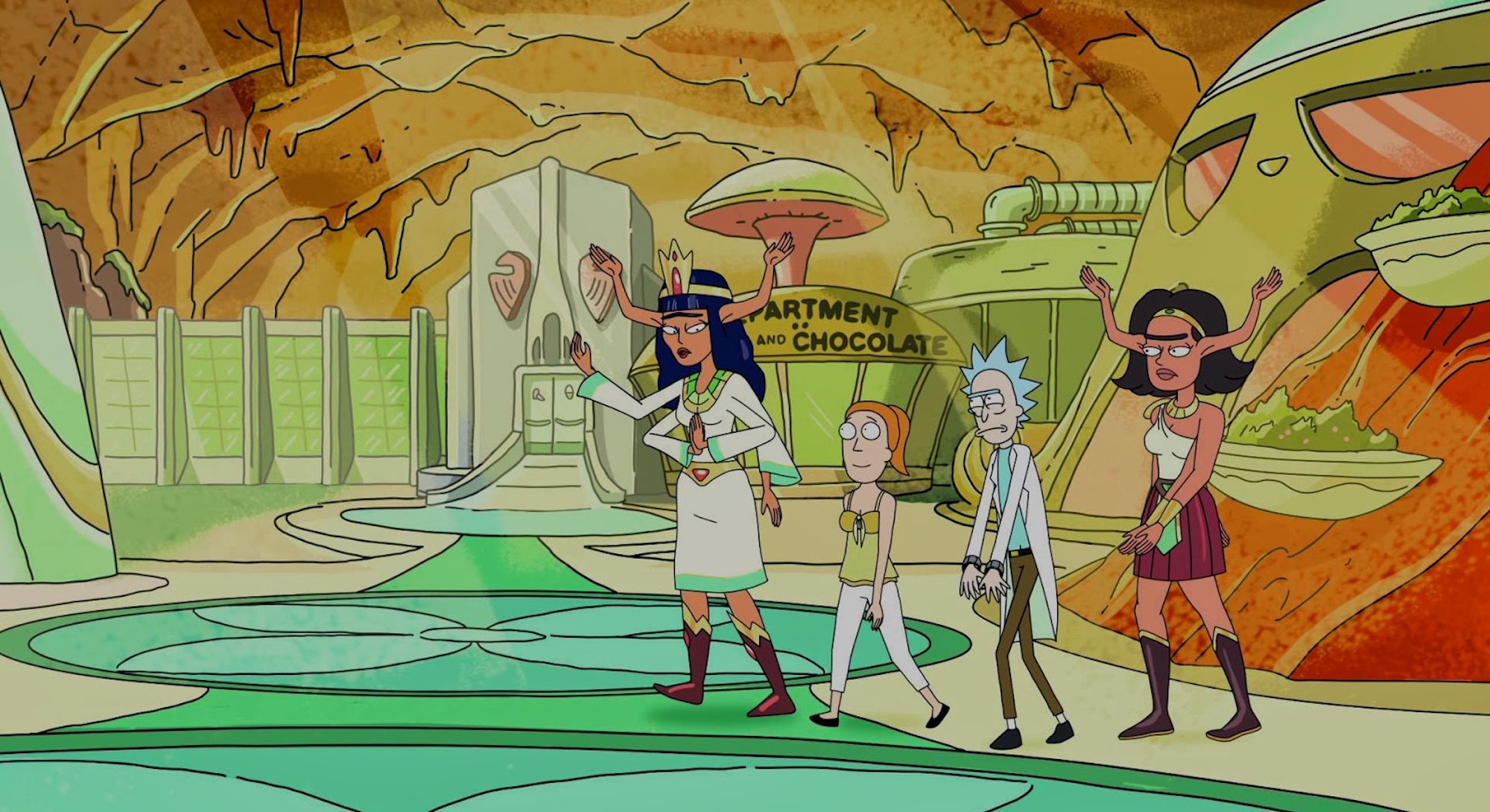 Even when television’s most popular comedy delivers a middling episode, it’s still pretty hilarious. Yet, the worst episode of Rick and Morty still struggles with a derivative plot and lackluster jokes that never really land. Even at that, it’s still really entertaining. Hands down the worst episode ever came back in Season 1 with “Raising Gazorpazorp.”

“Raising Gazorpazorp” originally aired on Adult Swim March 10 in 2014. The main thrust of the story involves Morty copulating with an alien sex robot that produces his brutish hybrid son. Summer and Rick go to the robot’s original planet to figure out what’s going on, and they wind up in conflict with a matriarchal Amazonian-type society.

On paper that B-plot sounds pretty promising, but in execution, the whole thing just feels a bit tired, especially when you realize it’s mostly just a cheap imitation of the already campy and kitsch 1974 movie Zardoz in which Sean Connery wears bondage attire. The A-plot with Morty is painfully predictable and vaguely subversive as his baby matures within 24 hours into a hyperviolent, oversensitive monster.

So what makes this episode the worst ever?

The story opens with Morty and Rick at some pawn shop in outer space. While Rick haggles with the alien shopkeeper, Morty sheepishly asks Rick if he could get something for himself “for once.” He picks what’s obviously a sex robot. When the show returns after a break, we see Rick, Beth, Jerry, and Summer eating breakfast as sex noises echo from upstairs.

Yeah, Morty’s going at it with the sex robot, and soon everybody’s arguing about what, if anything, they should do about it. It’s a fair question, because please, oh god, make it stop. For almost no reason at all, then we get an incest joke: Morty rushes in and anxiously requests that Rick come upstairs. “Okay, now if we hear squeaking,” Beth says, “We intervene.”

Would any mother in the multiverse ever make a joke about her father and her son having sex? Statistically … yes. But that’s beside the point.

Rick and Morty is fond of sliding in an incest joke every now and then, and it’s pretty much the only area where it might push the envelope just a little bit too far. (Beckett Mufson wrote an excellent thinkpiece for VICE on this very divisive subject and how it’s tearing the fandom apart.) Is it kink-shaming to be anti-incest? Is that a fair question to even ask? A portion of the show’s fans get turned on by the dominant and submissive dynamic that Rick and Morty assume as partners, which might be fine when you’re watching an already weird-as-hell science fiction cartoon. But maybe it goes a little too far when it’s examined strictly within the family dynamic.

It’s hard to digest or interpret in “Raising Gazorpazorp” because like it often does, Rick and Morty quickly brushes aside an otherwise compelling entry point for poignant social commentary to move on to the next joke.

Morty’s sex slave — which he names Gwendolyn — gives birth to a six-armed alien creature. The entire episode shows Morty struggling to raise the child while Rick and Summer investigate its origins on the planet Gazorpazorp.

Rick initially doesn’t want to go on an adventure with Summer because he assumes it’ll cause problems. (“I don’t do adventures with chicks, Summer!”) And immediately, to prove his point, she’s abducted by a gang of sex-crazed male Gazorpians through the green portal created by his Portal Gun. On the post-apocalyptic planet, the males ravage the landscape and copulate with hordes of sex robots just like dear Gwendolyn.

Rick’s hyper-masculine and frankly idiotic assessment of the situation is that technology evolved to such an extreme on this planet that their culture phased out the need for females, and then they bombed themselves back to the Stone Age. When Rick finds out that it’s actually a hyper-intelligent ruling class running the operation, Rick still assumes they’re men. But it’s all elegant, telekinetic women.

This could’ve been a really cool turning point where the show demonstrates how Rick’s dumb, chauvinistic expectations get undermined by a mature, sophisticated society. Instead, they’re all dim-witted and basic-AF.

Everything about female Gazorpian society feels like a caricature of offensive female stereotypes. The “worst crime” you can possibly commit is to have “bad bangs,” for which the punishment is “The Silent Treatment.” Their courtesy greeting is simply, “I’m here if you need to talk.” They casually enjoy mojitos amidst crisis and constantly talk fashion. Rick farts loudly at some point gets sentenced to death. Rick and Morty can and should be absurd, but the tone-deaf and childish writing here feels much too antiquated in 2018.

Rewatching episodes like this makes for a painful reminder of how bad the writing for Summer, in particular, was in the early days of Rick and Morty. Here, she’s a self-righteous bratty girl obsessed with PC culture, which is a far cry from the developed version of her we get in Season 3 episodes like “The Rickshank Redemption” or “Rickmancing the Stone.”

Eventually, she saves herself and Rick by telling the female Gazorpians that “gay men” are the reason why she has such a cute top. They just let her go because good fashion is more important than common sense or the law. Even when Summer gets agency as a character, it’s in a pretty dumb way.

Morty’s naivete is on brazen display as he takes care of his alien son, Morty Jr., whose first words are “death,” “domination,” and “destruction.” Beth and Jerry lazily watch on, tossing digs at one another while overtly criticizing Morty’s terrible parenting skills (as if they have any right to judge). Morty has neither the intelligence nor the maturity to be a good parent, but he’s earnest enough to be a bad but caring one.

(Morty Jr. is one character we’d love to see return in Season 4.)

“Raising Gazorpazorp” was written by Eric Acosta and Wade Randolph, who also got the byline for “Anatomy Park.” These two often pop up on most lists as some of the worst episodes the show has to offer. Both are still enjoyable and fun, but they offer little in the way of insightful storytelling. You can’t help but wonder what a story like this could have done in more woke hands better suited to handling what could have been a nuanced examination of gender norms and roles.

Rick and Morty is often at its best when it highlights how Rick is an outsider in a random, cruel, but legitimately compelling universe. Rick fancies himself a god that lords over an endless sea of idiots, and only when he’s proven wrong or messes up do we get interesting stories. When Rick and Morty demonstrates Rick’s folly, it’s legitimately elevated to the smartest show on television. At its best, it can offer critical insights into depression, alcoholism, therapy, and even how fucked-up kids can be.

But in “Raising Gazorpazorp,” the show doesn’t strive for anything beyond bad fart jokes and making Summer look dumb, even when there’s an excellent sequence in which Morty Jr. does a Footloose-style dance in. an empty warehouse.