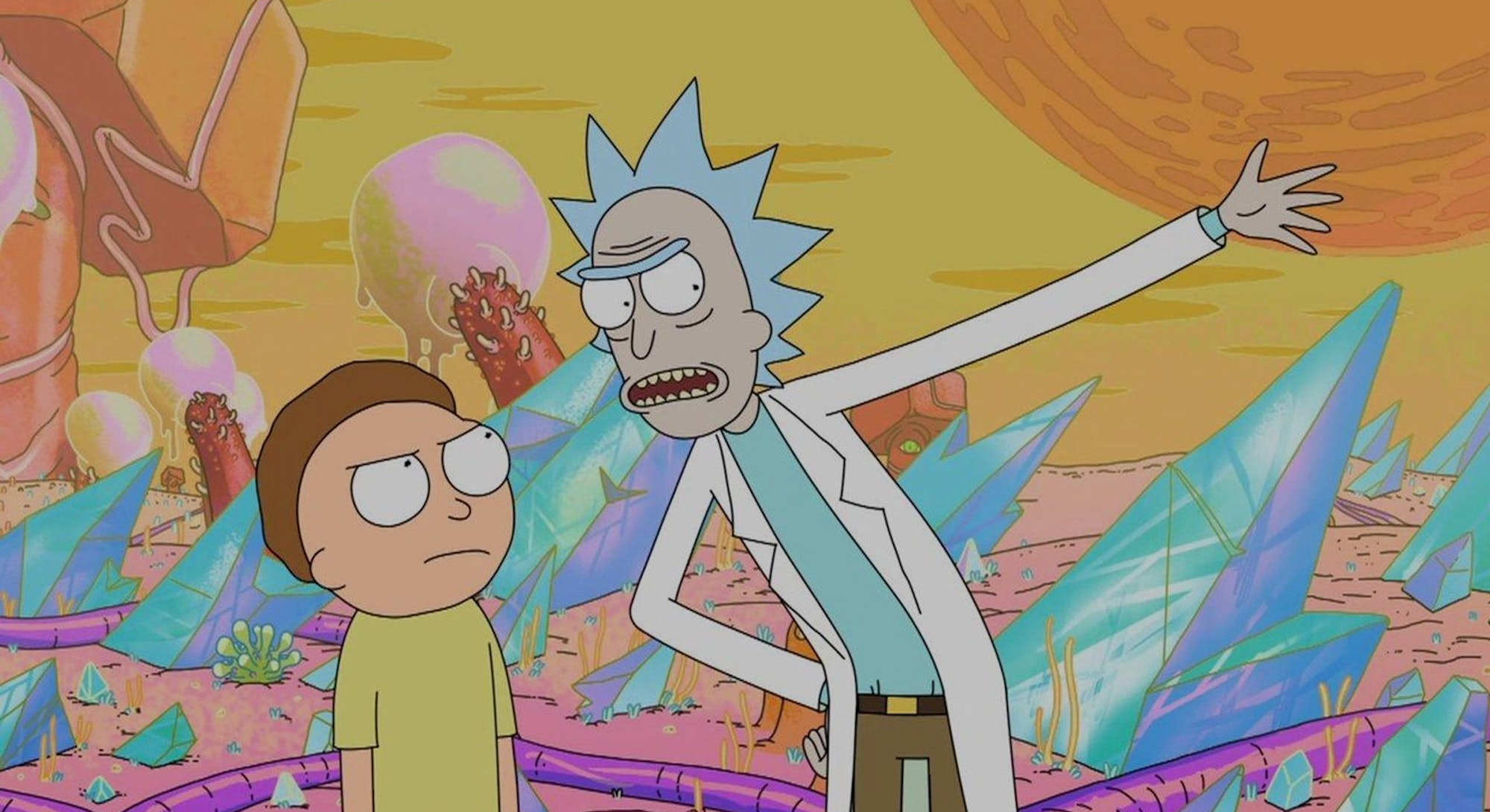 When Rick and Morty wraps up its third season, it will mark 31 episodes of Morty’s adventures with his brilliant but insane alcoholic of a grandpa. Rick and Morty has satirized almost every sci-fi and horror trope you can think of, but it’s still coming up with brilliant ways to shock and inspire people with its unique brand of nihilism.

Despite being mostly procedural in nature — especially in how it subverts the Hero’s Journey with story circles — Rick and Morty does occasionally offer more serialized drama and stakes that forever change the show.

Editor’s Note: This article is updated as new episodes of Rick and Morty are released.

Here’s the definitive ranking of every Rick and Morty episode ever:

Nobody wants to listen to a young teenager make love to an alien sex doll.

Keith David as POTUS is great, as is Ice T as a literal “T” made of ice. But the song Rick uses to defend the Earth from giant talking heads is pretty bad. So is the religious subplot where people worship the heads.

“Anatomy Park” follows the plot of Jurassic Park beat by beat but it’s all set inside a hobo’s body and about diseases. It’s gross and not very fun. More fun is had at Christmas dinner with the boyfriend Jerry’s parents share.

The first ever episode of Rick and Morty checked all the right boxes. It established the complicated framework of the show in an effective way, demonstrated the character dynamics, and even took us to a crazy dimension. But opening on a story in which Rick coerces Morty into smuggling huge Mega Seeds through intergalactic customs via his butthole is a bit over-the-top.

The Morty and Jerry adventure to Pluto and the debate about Pluto’s status as a planet is kind of boring. Rick competing against the pawn shop devil in a battle of wits is fun, but the spoof on Stephen King’s Needful Things feels really out of place in a sci-fi show.

Prince Nebulon, the leader of the Zigerion “scammers,” comes off as annoying in his attempt to get Rick’s recipe for Concentrated Dark Matter by trapping him inside a simulation inside a simulation. Still, fans get to see Jerry acting really dumb when he’s totally oblivious to the fact that he’s in a simulation despite obvious signs.

The B-plot of the Season 1 finale is among the worst the show has ever offered: Beth and Jerry go spend some time on the Titanic 2, an authentic way to relive the Titanic experience. Meanwhile, Rick and the kids throw a huge party at the house. It’s mediocre.

When time itself splinters into dozens of pieces, a single decent joke is taken beyond the breaking point. The Fourth Dimensional Beings are fun, along with Schrodinger’s Cats floating outside, but it’s hardly a classic.

Rick’s final battle against the President is an awesome spectacle, but the anxious B-plot about Beth suspicious that she’s a clone amounts to a lazy season finale in an otherwise great season.

This episode expands the interdimensional nature of the show a great deal, but it just doesn’t feel quite as fun as some of the greats.

After an emotional Season 2 finale that ended with Rick in prison, the surprise airing of the Season 3 premiere on April 1, 2017 will forever be a defining moment for the series. This is an important episode for sure; it’s just not top tier on its own merits, Szechuan sauce be damned.

Not only does this episode involve the return of the beloved Interdimensional Cable, but it has the best guest star ever with Werner Herzog as Shrimply Pibbles, the intergalactic alien equivalent of Gandhi. He needs Jerry’s penis for a new heart.

In an otherwise Jerry-light Season 3, it’s welcome to see the hapless and foolish father of the Smith children back on the show. Rick and Jerry is a weird pairing that actually works because their dynamic evolves rather than runs around in circles here.

“Tiny Rick!” Need we say more? He’s a huge hit. In an equally as good B-plot, Beth and Jerry destroy the best couple’s therapy in the galaxy because the physical manifestations of their perceptions of each other team up and destroy things with out of co-dependency.

Morty gets a little too into the Purge event. It’s scary, but also a lot of fun to watch.

“Mortynight Run” is Rick and Morty really hitting its stride. Krombopulos Michael, the good-natured deadly assassin, is a delight, as is Morty’s experience playing Roy: A Life Well Lived. Few episodes dramatize Morty’s naive attempts to “do good” in a chaotic universe that often does the opposite of reward such behavior.

There’s also Jerry Daycare, one of the best B-plots ever.

Rick created Froopyland as a playpen for Beth as a child, and they return to it in an episode that’s as twisted as it is horrifyingly fun. Even in the B-plot, fun things happen when the kids visit dad for the weekend.

When Rick takes Morty and Summer to the Mad Max universe, the kids struggle to process their anger towards their parents impending divorce. It’s a smart satire of toxic masculinity while also exploring how the kids processing their feelings.

We get to see Rick’s asshole side cranked up to 11. But the real fun is with Healthy Morty, who actually becomes a veritable Wolf of Wall Street and ladies’ man when he’s not bogged down by insecurity. A compelling and seriously weird way to look at their psychologies.

Season 3’s take on a “anthological format” veers away from Interdimensional Cable and instead offers a new conceit: Rick periodically removes traumatic or bothersome memories from Morty’s brain. We get to relive many memories we never knew and get to see some of Morty and Rick’s worst — and dumbest — mistakes.

“Interdimensional Cable 1” sees Beth and Jerry using VR goggles to experience their much better off alternate dimension lives. When Summer vows to leave, thinking she ruined her parents’ lives, it’s Morty that gets her to stay by delivering the very essence of Rick and Morty in quote form:

“Nobody exists on purpose. Nobody belongs anywhere. We’re all going to die. Come watch TV.”

The whole family goes to Birdperson and Tammy’s wedding only to find that the whole marriage was a sham because Tammy works for the Galactic Federation. Rick was their main target, and rather than keep his family in danger, Rick turns himself in and goes to prison in a heartbreaking sacrifice.

A perfect example of Rick and Morty joking about a sci-fi premise and taking it several steps too far (but in a good way here), “The Ricks Must Be Crazy” has Rick and Morty go inside the battery that powers Rick’s car to reveal a universe inside of that one. Rick’s car also has a ridiculous, deadly method of keeping Summer safe.

Rick lazily designs a love potion that, in theory, should make Morty’s crush fall in love with him. Instead, the serum bonds to the flu that’s going around and becomes a devastating virus that mutates everyone on the entire planet except for Morty’s family. Rick and Morty have to abandon the world for an alternate reality where their counterparts died.

The second episode ever establishes a successful model: Toss a sci-fi distraction at the rest of the Smith family while Rick and Morty have an adventure. In this case, Rick builds a collar that lets the family dog gain sentience. Over time, the dog builds an empire of smart dogs that take over the world.

Meanwhile, Rick and Morty try to incept Morty’s teacher for better grades, offering up a hilarious satire of both Inception and Nightmare on Elm Street in the process. Both stories are incredibly strong.

In Rick’s survivalist adventure to avoid family therapy, he’s left stranded as a pickle. When he winds up rolling into the sewer, he has to battle roaches, rats, and eventually even Russian agents and Danny Trejo’s Jaguar.

“Pickle Rick” is an insane, violent adventure while also offering a poignant look at the practice of therapy itself. It’s entertaining, insane, thoughtful, and reflective.

Who thought Rick and Morty could satirize the entire superhero genre while also working in Blackout Rick as a villain akin to Saw’s Jigsaw? The randomness of this episode defies expectations in the funniest ways imaginable and delivers an immensely fun experience.

Despite a disturbing Rick and Morty A-plot adventure where Morty almost gets raped, the drama that unfolds when Rick unleashes the Meeseeks Box upon the rest of the family is undeniably one of Rick and Morty’s absolute best stories. The lovable, blue creatures exist only to solve problems, but when Jerry gives them the nigh impossible task of improving his golf game, it nearly gets them all killed.

More properly known as “Tales From the Citadel”, this Season 3 episode has Rick and Morty go off on a “a fun, fresh, self-contained adventure” to Atlantis that we never see.

Instead, we’re treated to an interwoven collection of storylines aboard the recovering Citadel that Rick nearly destroyed in “The Rickshank Redemption.” The stories feel like vignette that collectively demonstrate what life is like for all sorts of Ricks and Mortys, with the most important narrative arc coming in the form of Evil Morty’s democratic takeover of the government.

“Total Rickall” has perhaps the single best opening to any episode ever, in which Rick realizes that “Uncle Steve” is an evil alien parasite and shoots him in the head. The family laughs about it with Mr. Poopybutthole and spend the entire episode on lockdown, trying to kill off all of the fake characters created by a parasite that wants to take over the world by implanting fake happy memories.

The attention to detail here is incredible, the characters memorable, and the quirky jokes and odd subplots make this the most entertaining episode of Rick and Morty ever.

Is the best episode yet to come? We’ll find out as Rick and Morty Season 3 continues Sunday nights on Adult Swim at 11:30 p.m. Eastern.

If you liked this article, check out this video of four Rick and Morty fan theories you should know about.