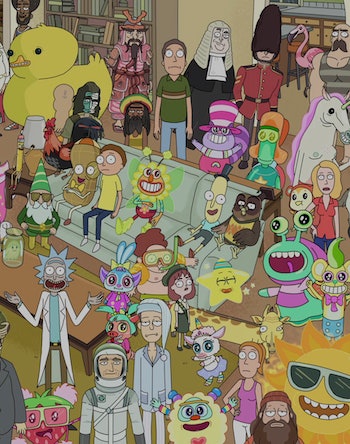 While we endure the seemingly never-ending wait for Season 4, the least we can do is ruminate upon the various abandoned plotlines that Rick and Morty has established, because if there’s anything we should get in Season 4, it’s more appearances from fan-favorite characters and closure about characters that have been MIA for far too long.

In fact, there are so many plot threads and people we haven’t seen or heard from in the longest time that you could make an entire season out of just bringing back old stories in clever ways. As such, here are 11 dangling plot threads, forgotten characters, and other fun stories that Rick and Morty Season 4 should bring back:

The Season 3 premiere introduced millions of people to the fabled McDonald’s sauce originally created as a promotion for Mulan in the Nineties. Foaming at the mouth, Rick shouted at Morty about how it was his singular goal, and considering how much Rick and Morty loves trolling the fans, having Rick simply achieve that goal would be a hilarious way to kick things off. Even better? If Rick ate Szechuan Sauce in every single episode.

10. It’s About Time for Morty and Snuffles to Reunite

This one’s a deep cut of sorts, but the second episode of Rick and Morty ever had Rick build a device that gave the family’s dog Snuffles sentience. By the episode’s end, an army of sentient dogs with mecha suits took over the world, but out of love for Morty, Snuffles took his people into an alternate dimension where they could live in peace. Morty and his former dog separated on amicable terms, and a reunion on them could be a welcome storyline in Season 4. The thing is, Snuffles’s original reality is the Earth that got Cronenberged. What if he’s already been looking for Morty because he needs help to save his people, but this entire time he hasn’t known where to look?

We hate to be the ones to finally come out and say it. As wonderful and iconic as Interdimensional Cable is as a concept for Rick and Morty, it’s already proven the point that the Rick and Morty multiverse is quirky and random. Season 3’s “Morty’s Mind Blowers” was a more satisfying and way funnier “take on a somewhat anthological episode,” to use Rick and Morty co-creator Justin Roiland’s words. Instead of the insane randomness of Interdimensional Cable, “Morty’s Mind Blowers” offered up perhaps a dozen hilariously dark memories that Rick made Morty forget. Give us more of these absurd vignettes!

We still consider “Raising Gazorpazorp” one of the worst Rick and Morty episodes ever, but even then, it’s still pretty good. Morty impregnated an alien sex doll and out came a Gazorpazorpian with his human DNA. Morty Jr. then then then then grows up to become a New York Times bestselling author of his autobiography My Horrible Father. He was temperamental and violent in his younger years, but Morty Jr. became a brilliant but pretentious writer, which would make him perfectly apt for some kind of villainous reappearance. Even if that’s not the case, he’s still technically part of the Smith family, right?

7. We Need to See Atlantis

“The Ricklantis Mixup” delivered perhaps the single greatest Rick and Morty episode ever in “Tales From the Citadel,” but while we visited the Citadel and its innumerable Ricks and Morties, the main Rick and Morty got to go to Atlantis where they hooked up with mermaids. We’re not saying we want to see any mermaid orgies or anything like that, but judging by how much fun those two had at Atlantis, we’d also love to partake in some of the fun. Even if it’s just a brief scene or quick joke, it would be exciting to see what Rick and Morty did during that episode.

6. Mr. Poopybutthole’s Family and the Smiths Hang Out

Just before Thanksgiving, Adult Swim released a video that offered tons of Mr. Poopybutthole Easter eggs. Since the character debuted in the excellent Season 2 episode “Total Rickall,” Mr. Poopybutthole has become the de facto mascot for the show, breaking the Fourth Wall to discuss the show’s future with viewers. We’ve all come to love him, which makes it so tragic that Beth shot him at the end of “Total Rickall,” especially when you remember that he was such a dear family friend.

We’d love to see Beth reconcile with Mr. Poopybutthole so that the Smiths and the Poopybuttholes could all hang out together for a fun vacation. Wouldn’t that be something? Oooowwwweeeeee!

One of the most confounding teases that came out of Rick and Morty Season 3 was the season premiere’s post-credits scene that reveals Tammy survived the events of “The Wedding Squanchers” and somehow transformed Birdperson into a Terminator-esque cyborg called Phoenixperson. They flew off together, and we all sort of assumed that they’d try getting revenge on Rick in some fashion, which would devastate Rick considering Birdperson was one of his only friends.

Yet, inexplicably, Rick and Morty left this pretty awesome plot thread dangling for the entirety of Season 3. Is the Galactic Federation still operating after it was seemingly destroyed in “The Rickshank Redemption”? What are Tammy’s motives now? Will Phoenixperson ever remember who he was? Are they still technically married? Season 4 really out to answer all of these questions in some fashion.

4. Beth Is Actually a Clone and the Real Beth Comes Back

Rick and Morty Season 3 was, for the most part, very strong. But the finale, “The Rickchurian Mortydate” offered a peculiar amount of frustration and reestablished Rick and Morty’s status quo. So it felt at odds with the awesome cliffhanger we got from the Season 2 finale. The one worthwhile hint came from Rick thinking that the Beth living in their house might be a clone. In “The ABC’s of Beth,” he offered his daughter the same opportunity he had: to leave the family behind and travel the multiverse doing her own thing, all while a clone replaced her in their current reality. This led to an identity crisis in Beth that Rick wanted to solve by killing her. But after the family gangs up on Rick, the whole thing gets quietly swept under the rug.

But really, is that Beth a clone or not? The best way to explore this would be for a battle-hardened Beth to return to their universe looking to kill her clone and take her rightful place back.

3. Supernova Leads a Team of Supervillains to Get Revenge on Rick

The Rick and Morty comics went in a drastically different direction for the Vindicators somewhat recently, focusing on a team of superheroes from an alternate reality that went through their own kind of Infinity War. But in the Rick and Morty Season 3 episode “Vindicators 3: The Return of Worldender, Rick got blackout drunk and killed off almost all of the Vindicators. Supernova kind of became a supervillain in the end and ran off, but she clearly harbors some kind of vendetta against Rick. If she ever returns to the show, then she’ll no doubt gather a group of superpowered individuals to try and take down Rick for good.

2. We Finally Learn What Happened to Rick’s Wife … When She Shows Up!

There’s a section of the Rick and Morty fanbase totally devoted to fan fiction about Rick Sanchez’s long-lost wife. Who is Beth’s mother? How did she and Rick fall in love? What happened to her that left Rick so miserable? These questions cut to the core of Rick’s character and fuels tons of fan speculation, which is why the creators totally trolled fans in the Season 3 premiere with one of Rick’s fake memories of a “Diane Sanchez.”

But Season 4 would be the perfect time to finally give us the truth about what happened to Rick and his wife, or at the very least some details about her. “The ABC’s of Beth” was one of Season 3’s strongest episode and it focused on what Beth’s childhood was like. Let’s get even more of that in Season 4!

1. Evil Morty and the Citadel Go to War With Rick and Morty

In “Tales From the Citadel,” one particular Morty manipulated his way through the political scene to gain absolute power. By the end, we realized that it was the same Evil Morty that messed with Rick towards the end of Season 1. That was a several year gap that we didn’t see or hear from the character, but he’s easily the fan-favorite big bad villain on Rick and Morty. Some fan theories posit that Evil Morty could be the main Rick’s original Morty and that they’re both equally as brilliant.

No matter what the origin of this Morty truly is, Season 3 definitely made it look like his story would play a huge role on the show moving forward. If Season 4 ever does happen, then it’s very likely that we’ll see Rick and Morty come up against Evil Morty yet again.

To learn a bit more about Evil Morty, check out this video starring yours truly: