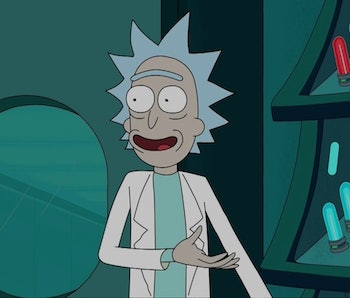 Rick’s never been more aware he’s in a TV show called Rick and Morty than in the “free-form anthology” format that is “Morty’s Mind Blowers.”

We never learn why, but the episode starts with Rick and Morty running around an Escheresque set of ruins floating in space with the Truth Tortoise. Who cares about the creepy dude chasing them or the tortoise itself? They’re a MacGuffin used to get to the real plot. After Morty looks into the Truth Tortoise’s eyes, he just sort of “knows everything,” and it burns out his already frazzled brain.

That’s when Rick reveals an entire subterranean lab beneath the garage for what he calls “Morty’s Mind Blowers.” Whenever Morty has a traumatic memory — or just a memory that Rick doesn’t want him to keep — Rick removes the memory and stores it in a glass vial, color-coded by the subject matter. (Red means Rick made a mistake or did something to Morty that Rick wants Morty to forget.)

Rick spends the episode making meta jokes. At first, he actually tells Morty they should watch Interdimensional Cable, but Morty’s freaking out too much. Later, Rick literally calls Mind Blowers a “free-form anthology format” and offhandedly compares it to a Simpsons Halloween special with named stories. Rick even “edits” some of the Blowers to provide extra context and memories for minor characters. (When Rick and Morty are stuck in a huge alien menagerie, they lure a pair of unsuspecting astronomers to take their place, and we also watch those characters’ memories of the experience.)

There’s more than one reference to Men in Black, and the sci-fi tech comparison is legitimate: Rick’s device for wiping Morty’s memories delivers a blast of bright light not unlike what happens in Men in Black. Rick’s able to extract and store the memory, and he also has a helmet that allows Morty to experience the memory all over again.

In past seasons, “Interdimensional Cable” gave co-creators Justin Roiland and Dan Harmon free rein to explore random bits in the form of TV shows and commercials from various dimensions.

Remember when little kids murdered a leprechaun and ate the cereal in his stomach? How about Stealy just stealing stuff? Ice cream served out of butts?

Rather than digressing towards bizarre universes where there’s a cop with baby legs or a “real fake door salesman,” this new format allows Rick and Morty to stay focused on the main characters to show tiny vignettes of their random adventures. They’re fun and totally random, but they also lack some of the excitement of more standard episode formats. Each Blower is a weird plot that tantalizes the viewer, and we never really get a satisfying experience from any individual story.

How long has Rick been doing this? Morty asked the same question:

“Since the first burp time your mind was blown!” Rick says. So pretty much since day one.

Because things can never be simple on Rick and Morty, eventually Rick and Morty get in a scuffle that wipes each other’s memories completely. Morty starts watching more and more memories to figure out who they are and how they got there. He eventually deduces that they’re some sort of team that fights aliens (which is where the Men in Black references come in) and that Rick is a total jerk.

It’s a good thing that Summer lazily wanders in while brushing her teeth and follows the protocols that Rick set up to fix them because she does so just as things are about to escalate between Rick and Morty. Remember when Summer saved their asses during the Purge episode by sending the mechanized armor? It’s a bit like that here.

Probably because “Morty’s Mind Blowers” comes right after the intense universe-building of “Tales From the Citadel,”, it’s easy to want a bit more from this episode. For one thrilling moment, as Morty’s plowing through memory after memory learning lesson after lesson about how messed up the universe and his family are, we can almost imagine that we’re watching Evil Morty’s origins unfolding.

How did Evil Morty get so smart? Where does his malevolent hatred towards Rick come from? A Morty fully exposed to the catalog of Mind Blowers might evolve into that. We have to settle for the next best thing.

The big finale fixes everything and plops Rick and Morty in front of the TV for Interdimensional Cable, and they immediately berate Summer for letting them fall asleep. Summer’s response to them is a troll pulled right out of some angry Rick and Morty fan’s tweet harassing the co-creators of the show:

Summer says, “No wonder you’re constantly fighting with each other and behind schedule.” It’s a call-back to the IRL circumstances of rumored “fighting” between Dan Harmon and Justin Roiland that led to the delay of Rick and Morty Season 3.

Fun reminder: The fans are the villains of Season 3.

If you liked this article, check out this video about four fan theories you should know about on Rick and Morty.