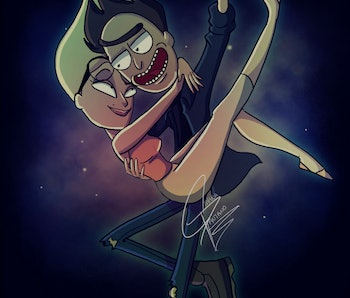 As far as Rick and Morty fans know, Rick Sanchez has one biological daughter, Beth Smith, née Sanchez. He conceived her with his ex-wife, who’s never been named on the show — the “Diane Sanchez” Rick created in Season 3’s premiere was just a ruse. We’ve seen Rick have sex with his ex, Unity, the parasitic hive-mind, and we’ve heard him mention Beth’s mother several times, though we don’t know why she’s not in the picture. Rick’s romantic life, past and present, is still a mystery — one that rabid fans have been trying to solve.

Giahna Pantano, a cover artist on Oni Press’ Rick and Morty comics, was surprised to find that she had accidentally created the answer. Like many comics artists, Pantano posts sketches, warmups, and even polished pieces on a very popular Tumblr — and sexy, cut-throat, Bonnie Sinclair-Sanchez features steadily in her online portfolio. Perhaps by sheer repetition and the fact that the Rick and Morty audience seem to be driven by their need to understand why Rick’s so fucked up, fans have rallied behind an original, non-canon character.

Bonnie already has art by Pantano, cosplay, and even NSFW mini-comics.

“She’s a bad bitch,” Pantano tells Inverse over the phone. “I wanted to create someone who wasn’t intimidated by Rick, someone who’s intelligent in her own right, but has this desire to look good too.” Pantano’s Bonnie is a blonde, curvy, sexy librarian-looking astrobiologist and geneticist who loves her grandchildren and is Rick’s (rare) intellectual equal. “I actually did a lot of research in defining her scientific background. I thought her resumé needs to be legit if I’m going to do this.”

According to Pantano’s non-official comics (which she began in 2014), Bonnie and Rick met in 1979 while working in a government lab. He forcibly tried to kiss her, she smacked him, he looked up her skirt as she walked by, and the rest was history.

What makes Pantano’s creation more legitimate than your average fan fiction? Pantano says Bonnie’s popularity is “only due to persistence. I just kept drawing her.” There might be more to Bonnie’s popularity than humble Pantano will admit; she’s a full-time character designer in Los Angeles and has applied to work on Rick and Morty twice. She’s even done several covers for Oni Press’s Rick and Morty comics so skillfully that her style looks indistinguishable from the show’s, at least to the untrained eye.

In fact, Justin Roiland knows who she is and encourages her. “I tell Justin,” Pantano says, laughing, “I wasn’t ready when I applied in previous years, but I’m coming for Season 4!”

Pantano created Bonnie as a logical wife for Rick, saying the character reminded her of her own mother, and of Cathy Moriarty in Casper (1995). Later, she became the only person in Rick’s life who was aware of what Pantano hesitantly guesses is his “manic depression.” She even has a comic where Rick hallucinates conversations with Bonnie, frightening Morty.

In that way, Bonnie satisfies several of the aspects of Rick and Morty that remain tantalizingly unclear in the show. The primary source of the show’s tension, for example, is whether Rick actually cares about his family. We’ve seen him sacrifice himself for Morty more than once, but Roiland and Harmon always make sure to include contrary examples of Rick being completely selfish. Pantano’s Rick is more complicated.

A character like Bonnie does a few things to Rick’s backstory: She confirms that he does have the capacity to care about family, but her absence from the show’s current storyline suggests something went wrong between her and Rick. Pantano likes to guess that it was Rick’s manic depression that eventually drove her away. “Maybe we’ll find out in Season 3 that someone cheated, but I have to believe he was in love with his wife at one point and something happened. I think that’s clear in the show,” Pantano says.

Pantano is devoutly respectful of what Justin Roiland, Dan Harmon, and their team of animators and writers have created in Rick and Morty, so much so that she doesn’t change any of their characterizations in her comics. Bonnie’s art and comics are a rare form of fan fiction that doesn’t try to remedy anything about the source material and only supplements existing characters. Bonnie’s existence doesn’t cancel out anything we’ve heard about Rick’s wife thus far, including:

Though Pantano swears she’s not critiquing the show in any way — “I’m essentially just making fan art for their show, that’s all.” — Bonnie does allow Pantano to write conversations and design scenarios between the show’s female characters, which almost never happens on the actual show.

Bonnie is Beth’s mother, for example, whom we only hear her refer to occasionally in canon episodes. When Pantano makes Bonnie present, art that includes three generations of Sanchez women emerges. That’s more female characters in one setting than Adult Swim has ever allowed.

But of course, Pantano insists she’s only operating from a place of admiration, despite her art and comics earning her thousands of followers on Tumblr. “People really care about and identify with this show,” she says, “even aside from those who obviously just have a crush on Rick. A lot of people tell me that the scene where Rick tries to kill himself [after his rekindled relationship with Unity goes awry, and she leaves him a second time] and cries instead really hit home for them, so I’m playing around in this world where Rick gets to care about someone.”

Rick and Morty has amassed a monstrous following, not only among fans of edgy animation, but among earnest TV viewers who enjoy more sentimental shows like Adventure Time, Steven Universe, and Gravity Falls, the latter of which trades Easter eggs with Rick and Morty. Work like Pantano’s allows that certain breed of fan to explore Justin Roiland’s original characters from a more emotional, intimate angle — the show masterfully gives us tiny glimpses what motivates Rick only to comically snatch them away just moments later. Pantano’s Rick is miserable not because of nihilism or loneliness, but because of the loss of a woman who understood him. Pantano’s Bonnie — and subsequently her Rick — are almost too real for Adult Swim, and they continue to captivate their audience online.

Rick and Morty Season 3 continues on Adult Swim this summer.

You May Also Like:6 Rick and Morty Developments We Hope to See in Season 3Watch This Fan-Made Family Guy and Rick and Morty CrossoverWhen Is Rick and Morty Coming to Netflix?What the Title of Rick and Morty Season 3 Episode 2 Tells UsAdult Swim Begs Justin Roiland to Stop Doing Rick ShotsMcDonald’s Shouldn’t Bring Back Szechuan Sauce for the Mulan Remake