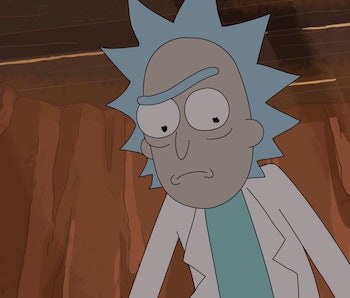 While you wait for more Rick and Morty to release this summer, you can brush up on everything we know about Season 3 or you can go on a deep dive exploration into what the episode’s title might mean.

You’ve probably noticed by now that every Rick and Morty episode title riffs on some other media property by replacing a word or part of a word with some random reference. Usually it’s “Rick” (“Something Ricked This Way Comes”), sometimes it’s “Morty” (“Mortynight Run”), and every now and then it’s even “Squanch” (“The Wedding Squanchers”) — each instance offers subtle clues as to the contents of the episode itself.

Most recently, “The Rickshank Redemption” played on The Shawshank Redemption but only insofar as both feature a prison break. Some title connections are spot-on, like “Lawnmower Dog” (Rick enhances the dog’s intelligence, almost leading to the end of the world) playing on The Lawnmower Man, in which a scientist enhances the intellect of a (human) gardener. Others are subtle and weird, like the relationship between “Big Trouble in Little Sanchez” — during which Rick roots out some vampires offscreen before spending the episode depressed as Tiny Rick — and Big Trouble in Little China, in which Kurt Russell battles it out in the mystical underground of San Francisco’s Chinatown.

You May Also Like:Watch This Fan-Made Family Guy and Rick and Morty CrossoverMcDonald’s Shouldn’t Bring Back Szechuan Sauce for the Mulan RemakeWhen Is Rick and Morty Coming to Netflix?

So what might these odd naming conventions mean for the upcoming “Rickmancing the Stone,” due out this summer? Well, it could clue us to the setup or a quick joke in the storyline — or it might just explain the plot of the entire episode. The clear reference, however, is to Romancing the Stone.

Romancing the Stone is a 1984 action-adventure romantic comedy that feels very similar to the original Indiana Jones movies, though it has a slightly more satirical bent. A romance-adventure novelist (Kathleen Turner) travels to Colombia to save her sister and follow a treasure map. She’s joined by a mercenary (Michael Douglas) on the adventure, and they eventually fall in love.

Though all hope of riches seems lost when an alligator swallows the gem whole (along with a person), and Jack dives after it. Jack gets that gem, and the leads get their happy ending.

Something tells us “Rickmancing the Stone” won’t be anything quite like that. Rick’s been very vocal in the past with how he feels about love and romance. Instead, we can likely expect some kind of subversion of Romancing the Stone’s themes in typical Rick and Morty cynical fashion while the show borrows little more than an aspect of the movie’s base premise.

It’s entirely possible that the A-plot of “Rickmancing the Stone” might see Summer kidnapped and Morty having to journey through some sort of jungle, alien or otherwise, to rescue her with Rick. Alternatively, Rick and Morty might play the “Jack” in this scenario, selfishly trying to smuggle some exotic goods while falling coincidentally into someone else’s adventure (much like in “Look Who’s Purging Now”). Either way, there will more than likely be some kind of exotic gemstone that Rick will want to get his hands on, and Morty will likely get bogged down in the ethics of it all and develop a crush on some girl, as he tends to do.

Perhaps one specific scene that might get its own riff is when the leading pair burns up a bunch of marijuana to keep warm while staying in a crashed plane for the night.

Jack: [leans back out of a cloud of smoke with a goofy smile on his face] Yeaaah that’s what I call a campfire.

Even if this sort of situation is the only callback to Romancing the Stone, how absurdly believable is it to imagine Rick Sanchez saying just that while smiling through a cloud of smoke?