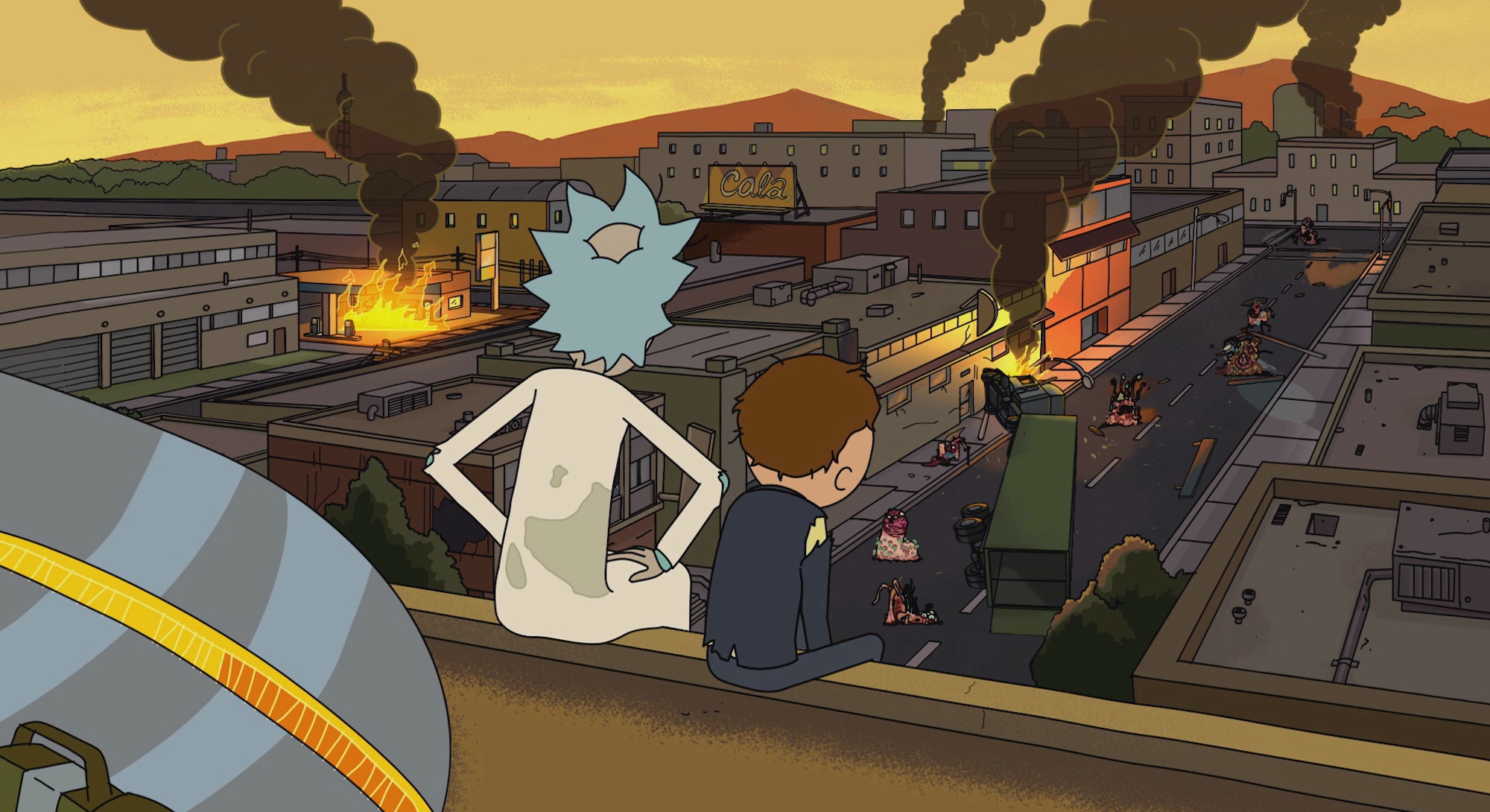 When Rick and Morty began, the show felt like mature way to have some wacky fun with typical sci-fi concepts, satirizing tropes in a crazy cartoon with a manic teenager and his brilliant alcoholic grandfather. It isn’t until Season 1, Episode 6 — “Rick Potion #9” — that you realize just how serious Dan Harmon and Justin Roiland take the dark implications of something like the multiverse, which has been used for fun superhero team-ups in The Flash or to overcomplicate Star Trek’s growing universe. “Rick Potion #9” essentially rewrote the rules of Rick and Morty by destroying the entire world and migrating the protagonists into an alternate reality where they replace their dead selves.

This experience almost broke Morty, and it definitely broke us. “Rixty Minutes” — two episodes later — might feel like the first time Rick and Morty achieved brilliance, but it could only get there with the devastating groundwork laid by “Rick Potion #9.”

For how often Rick screams about the infinite number of realities, even using it as an excuse to abuse his family and call Morty a “little piece of shit,” it isn’t often that we’re shown what the existence of a multiverse really means beyond the occasional joke about characters like Lawyer Morty or Doofus Rick.

In “Rick Potion #9,” Rick whips up a love potion so Morty’s crush Jessica will notice him, but things take a horrifying, disastrous turn when a regular flu virus mutates the concoction into a global pandemic that transforms everyone on Earth into sex-crazed zombies who want to mate with Morty for life. Rick’s counter-serum turns them into giant praying mantises, then the fix for that mutates everyone on the planet into terrible Cronenberg monstrosities.

Things go from bad, to worse, to a full-on nightmare in a matter of minutes. If ever a Rick and Morty episode felt like a horror movie, it’s this one. Unlike something like The Simpsons’ “Treehouse of Horror,” this dark twist on an animated procedural series has complications that last to this day on Rick and Morty.

Also Read: “Ranking Every Episode of Rick and Morty Ever”

For all its importance in Rick and Morty history as a groundbreaking episode, “Rick Potion #9” shows some growing pains when you go back for a rewatch. The series was still finding its footing when this originally aired in January 2014.

The art and animation style of tertiary characters feels a bit under-polished, especially in scenes like the “Flu Season Dance.” Morty rubs a little bit of Rick’s potion on Jessica’s arm, and she’s smitten with him right away. Because she’s infected with the flu virus, however, she contaminates her boyfriend who contaminates the punch, and before you know it, the thing is airborne.

The crowd of random students swarm Morty with their pupils dilated, and the unpolished art adds a frightening element to the scene at the expense of overall quality, but the whole thing is enhanced by horror movie musical cues. In later episodes, the art team tackles group shots with astounding precision, but here the simple character art is noticeable.

There are also several scenes where Justin Roiland’s vocal work relies too much on Morty’s nervous stammer and Rick’s drunken slurred speech, like their initial argument when Morty requests a love potion. You can always tell when a line is improvised, and even when that’s part of Rick and Morty’s charm, it also pulls you out of the experience — especially when you compare it to the polished vocal work and sound editing of Season 3.

Rick and Morty’s production value has obviously increased over time as the show acquired more resources, so it’s easy to forgive a few slight flaws in an episode this good. When I first watched “Rick Potion #9,” it blew me away, but revisiting it and noticing these flaws led me to rank it as the seventh-best episode of all time.

Also Read: “Ranking Every Episode of Rick and Morty Ever”

Sometimes, Rick and Morty abandons most of the family to tell a more focused story on the main characters, like in “The Ricks Must Be Crazy.” At other times, the whole family is brought together for parallel adventures, like in “Rixty Minutes” or a unified adventure like in “Total Rickall.”

“Rick Potion #9” is somewhat unique in how the A-Plot of Rick destroying the world with a love potion informs and influences the B-Plot of Summer, Beth, and Jerry surviving in the apocalypse. Sometimes the B-Plot is weak and the A-Plot strong — or vice versa — but here they’re both excellent. By episode’s end, Beth of Dimension C-137 overcomes her abandonment issues and forsakes her father. This happens because, rather than remaining a meek loser, Jerry transforms into a total badass when confronted with the apocalypse, rescuing his wife and proving himself. He’s still a moron and a fool, but he’s also capable with a crowbar and a shotgun, so that’s worth something.

Dan Harmon uses a modified version of Joseph Campbell’s concept of the hero journey, dubbed “The Story Circle,” to develop stories for Rick and Morty. Through this analytical lens, Jerry becomes the hero of “Rick Potion #9.”

By comparison, Rick doesn’t really learn anything (does he ever?). He comes across as arrogant and unchanging, and when confronted with his own mistakes, he blames Morty for a perverse desire to trick a girl into liking him. Morty suffers a bit of a mental breakdown in the end, and we don’t see him process what it all means until two episodes later.

These versions of Summer, Beth, and Jerry return in the Season 3 premiere as Morty and the new Summer seek a means to rescue Rick from prison. Their fate remains uncertain after Seal Team Ricks froze them, but we hope they’re still out there.

Only a few Rick and Morty endings have a resounding impact on fans, and you always know it’s happening when a high-quality song kicks in.

Rick’s failed suicide at the end of “Auto-Erotic Assimilation” while “Do You Feel It” by Chaos Chaos plays is a real standout. Then there’s the original version of “Hurt” by Nine Inch Nails playing at the end of “The Wedding Squanchers” when Rick is sent away to Galactic Federation prison.

Here in “Rick Potion #9,” Rick uses a pop-up workbench on his car to find a parallel reality where he successfully cured the virus but then triggered an explosion in the garage that killed himself and Morty. The scene is horrifying and gruesome to watch, especially on the first viewing when you don’t realize right away that it’s a different pair. The Morty and Rick we’ve been following migrate into this alternate reality where they permanently start living.

Morty’s Season 3 arc is about demonstrating the knowledge he’s learned on Rick’s adventures, how he’s evolved into a smart, capable, efficient young man himself. That journey towards becoming more like Rick didn’t start in “The Pilot” when he shattered every bone in his body. That journey starts right here when “Look On Down from the Bridge” by Mazzy Star begins to play as Morty realizes he has to bury his own body in the backyard and go on living with a family that’s technically not even his.

What is the meaning of life when your entire world can be destroyed like that?

Throughout most of this episode, Morty acts like an immature bumbling fool, unsure of himself in a chaotic universe where his biggest priority is his crush on Jessica. He hasn’t learned any important lessons yet, and it’s here that he learns perhaps the biggest of all.

Once he gets over the trauma of migrating into what fans call “The Replacement Dimension,” he digests the experience into a nihilistic lesson that’s the foundation of Rick’s entire ethos. He even says it to Summer in “Rixty Minutes” two episodes later.

Whether or not it’s given the proper context, this is one of the bleakest quotes from the entire series. But rather than a source of despair, this epiphany is meant to inspire a kind of radical acceptance that we can’t control the chaos of the universe, so we might as well accept it, relax, and not let the horrors of existence destroy us.

What should we do instead? “Come watch TV.”