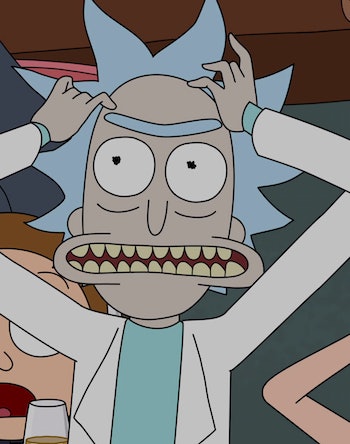 Most Rick and Morty episodes follow a procedural, cyclical storytelling structure that has little to no lasting impact for the overall series. Rick introduces or encounters a conflict, characters go outside their comfort zone to overcome an obstacle, and everything returns to normalcy at the end of the episode. With a few crucial exceptions, there aren’t that many serialized plots to follow — but that changed forever with the Season 2 finale, “The Wedding Squanchers,” which aired on October 4, 2015.

The devastating ending, which saw the Earth occupied by the Galactic Federation and Rick incarcerated without the chance of escape or parole, totally upended the procedural structure of the show. Not only did these events have consequences that lasted throughout Season 3, but this emotional cliffhanger lingered for almost two full years before the Season 3 premiere surprise-aired on April 1, 2017. By the time it finally arrives, the full wait for Season 4 will have been even longer and arguably even more arduous, but in many ways, “The Wedding Squanchers” felt like a more significant tipping point for the series.

“The Wedding Squanchers” is one of those rare Rick and Morty episodes, however, that goes big on the stakes and scope, and it earns huge emotional beats. It’s the only Rick and Morty season finale to actually feel like a legit finale worthy of a show of this caliber.

“The Wedding Squanchers” may not be the best Rick and Morty episode ever, but it is probably the most important one.

At the start of “The Wedding Squanchers,” Rick is already in a cranky mood when he receives an invitation to Birdperson and Tammy’s wedding on Planet Squanch. (These two met in the Season 1 finale, “Ricksy Business,” during the house party that Rick, Summer, and Morty hosted.)

Rick’s always been open about his contempt for marriage; He once called love “a chemical reaction that compels animals to breed.” But when Jerry gets stuck inside an intergalactic courier shaped like a giant floating meatball, Rick doesn’t have the option to refuse.

At the wedding, he’s more of a drunk curmudgeon than usual, is downright rude to Morty, and says that Birdperson’s “big day” already happened “at Blood Ridge on Glapflap’s third moon against the Gromflomites.” The throwaway line has inspired plenty of jokes and even some awe-inspiring fan art like the piece above by Joel Kilpatrick.

“The war in which we fought is far from over,” Birdperson says while inebriated and talking to Beth. “We live our lives in hiding. The Galactic Government considers us terrorists. … We have committed numerous atrocities in the name of freedom.” Rick and Morty thrives thanks in no small part to moments and lines like this, which imply so much more depth and history to these characters that we love laughing at so much. Fans of the show have always wanted to know more about Rick and how he became the way he is. These fleeting glimpses are the closest thing we get to answers.

Viewers should read all of these grim details as foreshadowing to what happens next: As soon as Rick finishes a genuinely touching toast about finally opening himself up to new experiences, we find out that Tammy was a spy for the Galactic Federation all along. This was a sting operation to capture or kill Rick, Squanchy, Birdperson, and all of their friends.

We see Birdperson die and Squanchy hulk out, presumably sacrificing himself to save Rick and the Smith family.

They’re on the run for about 5 minutes before they settle on a tiny planet. While there, Rick overhears the rest of the family arguing about whether or not they should turn Rick in, and he decides to turn himself in to protect them all. “Why are we doing this for someone that would never do anything for anyone but himself?” Jerry asks in an episode when Rick has been more ornery than usual.

Is it Jerry’s legitimate assessment of how unfair their predicament is that leads Rick to a change of heart? Or is it hearing Summer reply that you should love people unconditionally? Or is it when Beth vocalizes her obvious fear that we knew all along: that she’s afraid of her father leaving again? In a way, they’re all right. Rick doesn’t feel like he’s worthy of their love — or any love — so he turns himself in so that they might be safe, even if it does meaning leaving his daughter yet again.

Especially in light of Rick’s botched suicide attempt from earlier in Season 2, imprisonment feels like the only way for Rick to escape from a miserable existence.

Rick and Morty neatly wraps up just about every existing character dynamic in a neat little bow, and while “Hurt” by Nine Inch Nails plays in the background, Rick drinks in the bar where he told the Galactic Federation he’d be, weeping over a photo of himself with Squanchy and Birdperson — his two best friends now presumed dead. Rick dropping the photo on the floor of the bar feels like admitting defeat.

“The Wedding Squanchers” has a lot of stuff going for it: hilarious moments featuring on each member of the Smith family, exotic alien worlds, a slew of bizarre aliens, a spectacular action sequence, and Morty tossing a frisbee around the entire orbit of a planet and catching it on the other side. But it’s the emotional cliffhanger, one that persisted for 18 months until the new season began, that sat with fans for such a long time.

It kind of drove us all wild. What was going to happen to Rick? How would the Smith family cope with Earth being occupied by an alien government?

The dramatic ending was only compounded by the long hiatus that followed, giving millions of fans plenty of time to catch up and/or get distracted by all the weird stuff Adult Swim did with Rick and Morty, like a dramatic re-enactment of the The State of Georgia v. Denver Fenton Allen court transcript, a commercial for Carl’s Jr and Hardee’s, and a series of claymation shorts that put Rick and Morty into various sci-fi/horror films.

Breaking Bad showrunner Vince Gilligan once credited Netflix’s streaming platform as the reason why the series’ popularity grew exponentially in between seasons and leading up to the series finale. In much the same way, Rick and Morty’s popularity exploded during this specific hiatus because it was so easy to access for new fans and old fans alike.

For U.S. viewers, the series has been on Hulu for what feels like forever. For anyone outside the U.S., it’s Netflix. Episodes are often available directly from Adult Swim’s site, and it’s pretty easy to find some of them in full on YouTube. Access was never a problem for anybody. The only problem was a dearth of episodes, so by the law of supply and demand, the demand went way up in 2016 when we had no new Rick and Morty. By the end of the year, it was frenzied enough that fans began harassing series co-creators Dan Harmon and Justin Roiland over social media. What the heck were they doing? Why weren’t they making new episodes?

Dan Hamon eventually addressed concerns in a long Twitter thread, explaining the creative frustrations that led to the delay.

Rolling Stone reports that 9 million people watched the first Rick and Morty season at an average of 1.57 million viewers per episode. That average jumped up to 1.97 million with Season 2 and then to 2.51 million in Season 3. According to Newsweek, Live+7 ratings for Season 3 showed an 81 percent increase over Season 2 after 11 million watched that Season 3 premiere. There’s no denying that the year and a half between Season 2 and 3 drove fan fervor higher and higher, which could help explain why so many of them latched onto the whole Szechuan Sauce craze after Rick joked about the condiment at the end of the Season 3 premiere.

By the end of Season 3 in October 2017, Rick and Morty was the biggest comedy on television, so 2018 felt just like 2016 as demand increased for more Rick and Morty. With new episodes slated to arrive in as little as six weeks, we can’t help but remember what it felt like to lose Birdperson, Squanchy, and even Rick to the Galactic Federation.

Watch “The Wedding Squanchers” on Hulu.