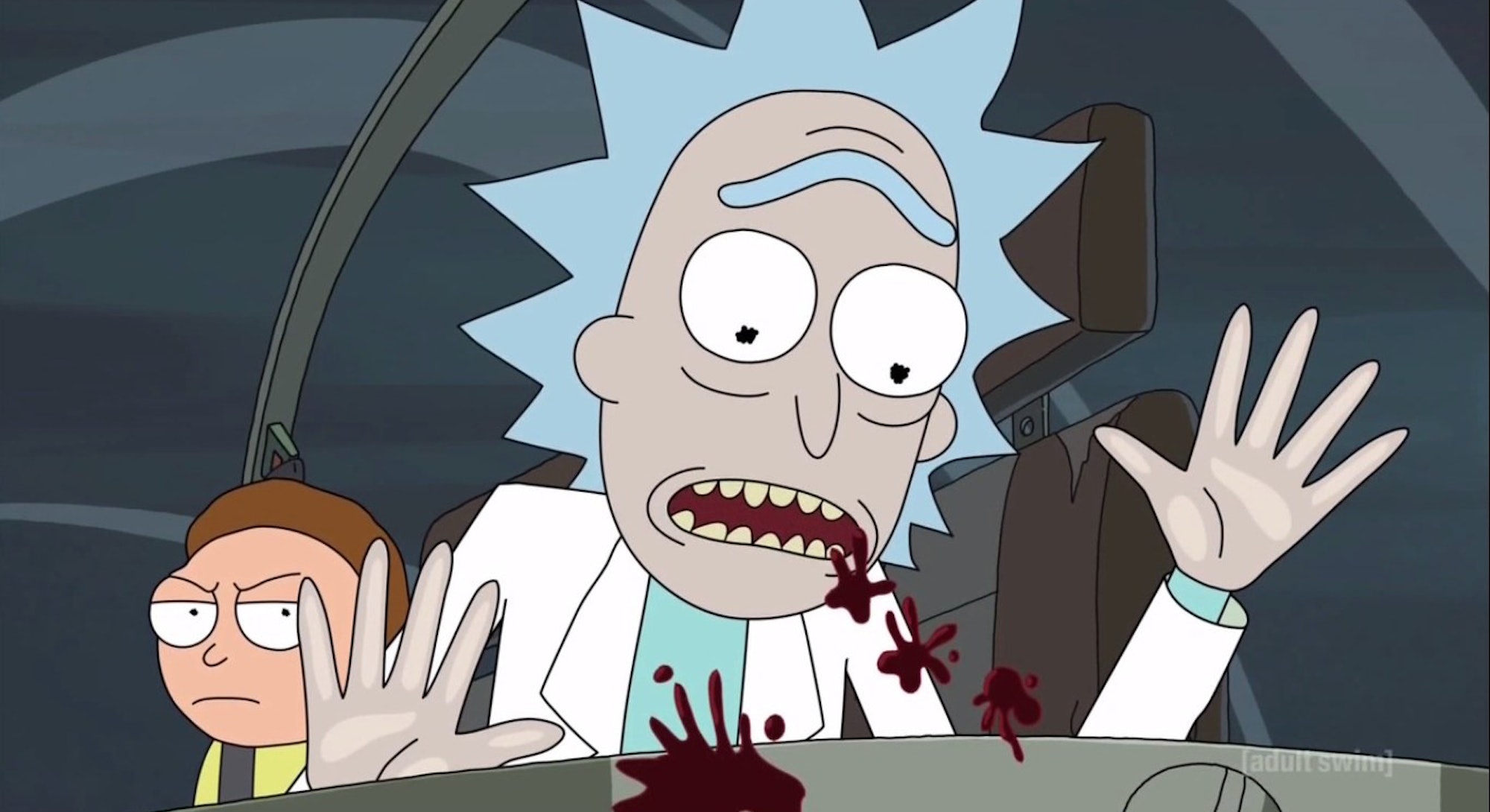 The penultimate episode of Rick and Morty Season 2 dabbles in straight-up horror by parodying the entire Purge franchise in delightful fashion. But rather than feeling like a procedural filler episode, “Look Who’s Purging Now” instead develops the core story of Rick and Morty while working within the confines of the episode’s gimmick. There’s some fun Iron Man action, a blistering indictment of the Hunger Games’ dumb ending, and a deep examination of Morty’s inner rage in a story that amounts to so much more than just “the Purge episode.”

Morty and Rick begin the adventure flying through space chattering with some happy meta-commentary about “getting back to the basics after a pretty intense mixed bag of a year.” In this somewhat straight-forward adventure, “back to basics” means flying down to a Western-looking planet of cat people that have an annual purge called “The Festival.”

“It’s like The Purge, Morty!” Rick says, excited. “That movie, The Purge?” Rick Sanchez often breaks the fourth wall, as he’s smart enough to know he’s on a TV show. It allows his to contextualize Rick and Morty for audiences on a meta level, and that’s perhaps most apparent in “Look Who’s Purging Now.”

The whole thing starts out like simple voyeurism, as if Morty and Rick might just spend a few minutes watching the Purge happen before flying away. But after Morty blackmails Rick into saving a damsel in distress with a bigger plan in mind, things get messed up very quickly.

“Look Who’s Purging Now” is one of the few episodes in which Morty pines after a young lady who isn’t his classmate Jessica. Each season seems to have an episode like that, with Season 1’s being “Anatomy Park” and Season 3’s being “Rest and Ricklaxation.”

Speaking of, episodes like “Anatomy Park” parody a popular horror franchise but fall flat, but “Look Who’s Purging Now” elevates the show to a place where longer-form dramatic jokes pay off and zany sci-fi elements give this Purge a unique twist that’s distinctly Rick and Morty.

The story pokes fun at a pre-existing franchise while mixing in the essence of chaos and randomness that a sci-fi universe of infinite possibility needs. It’s second perhaps only to “Pickle Rick” in terms of sheer violence, and we see a lot of psychological nuance for both of the title characters, Morty in particular. Especially when he goes totally nuts.

Despite initially claiming some kind of non-interference policy with less-developed civilizations, Rick gets really into the whole Purge thing, saying he “sees stuff like this for breakfast,” but Morty is very uncomfortable. Before the pair starts watching the Purge itself, Rick correctly diagnosis that Morty is “afraid of his own primal instincts.” We don’t realize just how accurate this is until later.

The inherent brilliance of the episode arises when we contemplate how often viewers idolize Rick and want to emulate his behavior without acknowledging that we’re just a bunch of Mortys stifling our instincts and emotions, bottling them up until they explode. Rick’s resourceful here, brewing super-potions and tinkering together a gun out of random objects, but he also phones in some help to get two sets of Iron Man armor sent out to them.

Part of the intrigue of the whole Purge concept comes from wondering how we might behave in such a circumstance. Would we be skilled and aloof like Rick? Or would we lose our shit like Morty?

Despite having only 22 minutes to work with, “Look Who’s Purging Now” examines the different psychological responses to the Purge in a nuanced way that the actual Purge movies can’t necessarily reach because they’re more grounded in reality. Each core character in the episode — Morty, Rick, and Arthrisha — approaches the Festival in radically different ways, portraying how different types of people would actually respond emotionally to a legit Purge. It helps that Purge Planet has Amish country vibes that clash with Rick’s technology. They’ve got crossbows and pitchforks. He’s got a flying spaceship, laser gun, and impenetrable body armor with rockets.

Morty initially refuses to even watch the Festival unfold, but as soon as it becomes life or death, he’s forced into the fray just like everybody else and eventually gets too into it.

Rick embraces the Purge as a tourist, assuming an authoritarian position lording over this infinite, violent universe. Rick fancying himself a brilliant god amongst idiots is on full display when he’s Purging. When Arthrisha asks if his ship comes from “the gods,” Rick says yes. This whole adventure is Rick’s entertainment, and even when he’s gravely injured, he doesn’t even consider death a possibility. It’s a punchline he can use to poke fun at Morty.

Morty, however, is in a constant state of fear and he’s also in total denial that rational people can behave like this. The poor kid is emotionally stunted and can’t express his emotions at any level, so repressed rage explodes out of him — he represents, in a very raw way, how most people would seemingly approach a “real” Purge. It’s a total spectacle when he goes full-on berserker in a dazzling display of hyperviolence, which is exactly why The Purge film franchise has found such a solid audience. These types of dystopian worlds represent a kind of wish fulfillment, rage rooms applied to entire societies.

Perhaps the episode’s best dramatic joke comes from the eccentric Lighthouse Keeper who is more into his screenplay than he is the Festival. What initially feels like a totally random joke actually serves as a narrative catalyst.

Rick sets up a beacon at the lighthouse so they can get the aforementioned Iron Man suits delivered, but Morty has to listen to this old alien’s screenplay. Inexplicably, the boring and unimaginative screenplay focuses on the “hot, but doesn’t know it” 28-year-old Jacey Lakims. The Keeper is deeply insecure and defensive about what’s obviously a terrible screenplay.

In a confident, delightfully imaginative episode of Rick and Morty, this weird Lighthouse Keeper feels so comically out-of-place. And his angsty outburst when Morty offers him genuine criticism spurs Morty to actually kill the guy, catalyzing Morty’s rage. This is Rick and Morty with its most densely packed, layered brilliance.

Arthrisha’s arc is totally the emotional core of this narrative, and it asks even more provocative questions than those brought-up by Morty’s fragile psyche. She pretends to be the damsel in distress to manipulate Morty and Rick out of their ship, all so she can enact justified revenge on the manipulative upper class.

She’s the Mockingjay (a la The Hunger Games) that recognizes an unjust society, and she participates in the Festival in the hopes of ending it for good. Does that make her just as morally bankrupt as the wealthy elite that uses the Festival as a tool of systematic oppression? Or does that mean she has just cause to murder her oppressors?

The big finale has Rick and Arthrisha team up with their high-tech suits to destroy the capitalist regime, and it reinforces the inherent classism that’s always at the heart of any Purge society. Money, not murder, is the real driving conflict behind any kind of Purge society.

After Morty and Rick head home, the remaining cat people just restart the same Purge-based society, reinforcing the inherent nihilism that everybody loves about this show.

The final note of the episode is another meta-joke that maintains Morty’s character, blaming his rage on the “Purgenol” that’s in a candy bar he ate, but the final shot reveals that the Yummy’Yums no longer contain the chemical. We all like to think that we can blame our worst behavior on some external force, and Morty walks away from this adventure thinking he has an excuse.

We find out in a Season 3 episode that Morty’s still holding onto plenty of rage, but that’s a different episode for another Rick and Morty Retrospective.