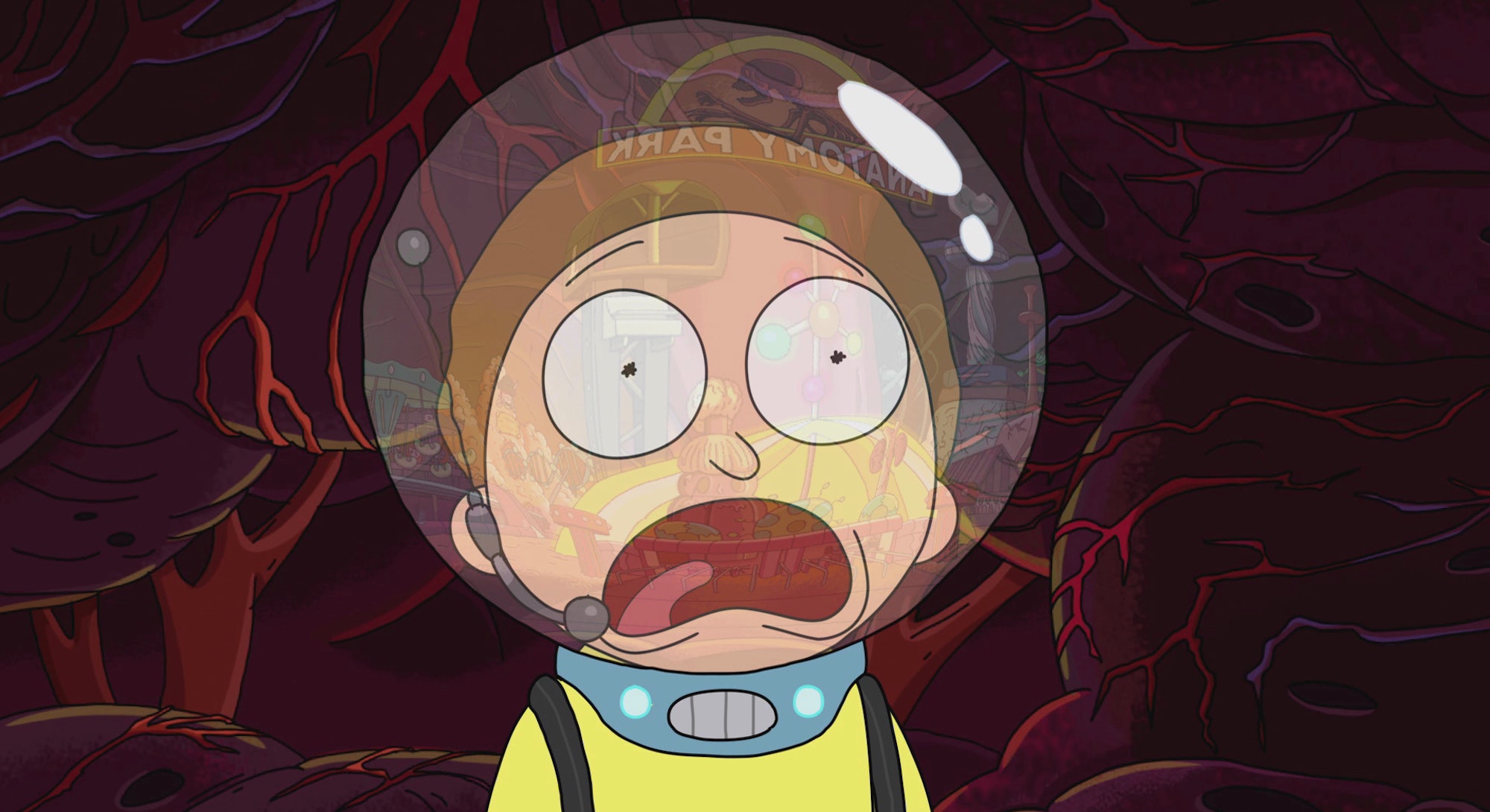 The closest thing Rick and Morty has to a Christmas special is “Anatomy Park,” the third episode ever that originally aired on December 15, 2013. What gifts are inside this episode? Well, a one-note Jurassic Park parody. Hey, it’s better than coal.

It’s Christmas Day, and while Jerry tries desperately to impress his parents — who have randomly taken an extra lover into their relationship — Rick recruits Morty for a mission to a microscopic amusement park inside a homeless man dressed like Santa Claus.

Yeah, this is how Rick and Morty does Christmas.

“Reuben,” as Rick calls him, is a sickly old man that plays host to an amusement park all about anatomy. Rick’s partner is one Dr. Xenon Bloom, excellently voice-acted by none other than John Oliver. Bloom’s a sentient amoeba that steals every scene and delivers the episode’s episode’s best jokes, but he’s ostensibly just just a cheap imitation of industrialist John Hammond from Jurassic Park. After Rick miniaturizes Morty and sends him into the park itself to see what’s wrong with Reuben to see what’s wrong with Reuben, poor Morty quickly finds out that the park’s security systems failed, unleashing all manner of horrific dinosaurs diseases.

What begins as a decent conceit quickly spirals out of control into too many Jurassic Park references and not enough of anything else. Even the other characters Morty encounter in the park feel like lazily drawn archetypes.

The story parodies almost every plot beat from Jurassic Park with a healthy dose of Fantastic Voyage (we’re inside a human body after all), and sprinkles in goofs about the rides in Anatomy Park which directly reference Disney World.

The inspiration for “It’s a Small, Small Intestine” should be painfully obvious to anyone who’s suffered through “It’s a Small World,” and Rick himself is stubbornly attached a ride/questionable rape joke called “Pirates of the Pancreas.” Even with these two rides, Rick and Morty plays the same joke twice hoping to draw more laughs.

Every Rick and Morty episode riffs on pre-existing science fiction properties in some fashion, but the best ones only do it by loose association, reinventing familiar tropes by incorporating some wacky spin or mind-boggling multidimensional pseudoscience or mind-boggling multidimensional pseudoscience. “Anatomy Park” feels more like a point-for-point adaptation of Jurassic Park that tosses in some other properties for good measure as a distraction, though it doesn’t offer much of a spin on those other references either. And there’s not much interesting going on.

Like many of the show’s worst episodes, individual jokes and dialogue might shine a few times, but the overall narrative trappings come off as tired, boring, or in this case, repetitive.

If the A-Plot has a strength, it’s in giving us a Morty that’s strangely capable, resourceful, and cool. He even makes out with the cute older girl Annie that works in the park. Rick never give’s Morty a choice about going on this adventure, but once Morty commits to it, he engages in plenty of heroism, mostly in an effort to impress Annie. In the scene featured above, Morty tries desperately to save the park’s mascot, who gets spaghettified and spat into Rick’s face on accident.

All things considered, this Morty feels much closer to Season 3 Morty in the “Vindicators” episode but there’s no development earned. “Anatomy Park” is the third episode ever, so the show’s still struggling a bit to find its footing here and in a sense, it overplayed its hand. Most of Season 1 depict the hapless Morty swept along on Rick’s adventures, and it isn’t until late in the season that he accepts that his new normal is as both victim to his grandfather and an unwilling interdimensional adventurer.

Here, there’s no whining, no pent-up aggression. Morty hooks up with a girl and doesn’t hesitate to bash some E. coli monsters in the face with a fire extinguisher.

Who is this badass boy in a yellow shirt? Because he’s not really Morty if he has that much composure when giant Hepatitis monsters try to eat him.

The episode also firmly establishes a crucial aspect to the dynamic between Rick, Beth, and Jerry at the very beginning: Rick tells them Reuben is a veteran that he checks in on yearly. Rick’s obviously lying because he wants to impress Beth while undermining Jerry’s protests. Beth twists this into a chance to worship her father. When Jerry complains about it, Beth reprimands him instead. Beth and Jerry have a deeply troubled marriage, and over the years Rick did his best to drive them apart. This is the foundation of his efforts.

The A- and B-Plots intersect when, as a last-ditch effort to save Morty, Rick embiggens Reuben’s corpse so that Morty can, relatively speaking, regain his normal size. The end result is a giant naked man in a Santa hat drifting just above the United States.

A New York City local news station reports on the giant face, and then a corresponding anchor checks in from somewhere in California. It’s a long setup for the hilariously crass check-in on some poor hunter in the Rocky Mountains getting crushed by a giant penis. This might be a dumb joke, but goddamn, is it funny.

All things considered, “Anatomy Park” is a decent episode. It’s just not a particularly interesting one because it doesn’t do anything different or interesting, and we don’t get any kind of character development from anyone.

It doesn’t help that “Anatomy Park” comes right after the excellent “Lawnmower Dog” and that the next three episodes are some of the all-time greats: “M. Night Shaym-Aliens!,” “Meeseeks and Destroy,” and “Rick Potion #9.”

At least, to conclude the seemingly endless and numbing barrage of Jurassic Park references we get in “Anatomy Park,” we’re treated to this one final meta joke: