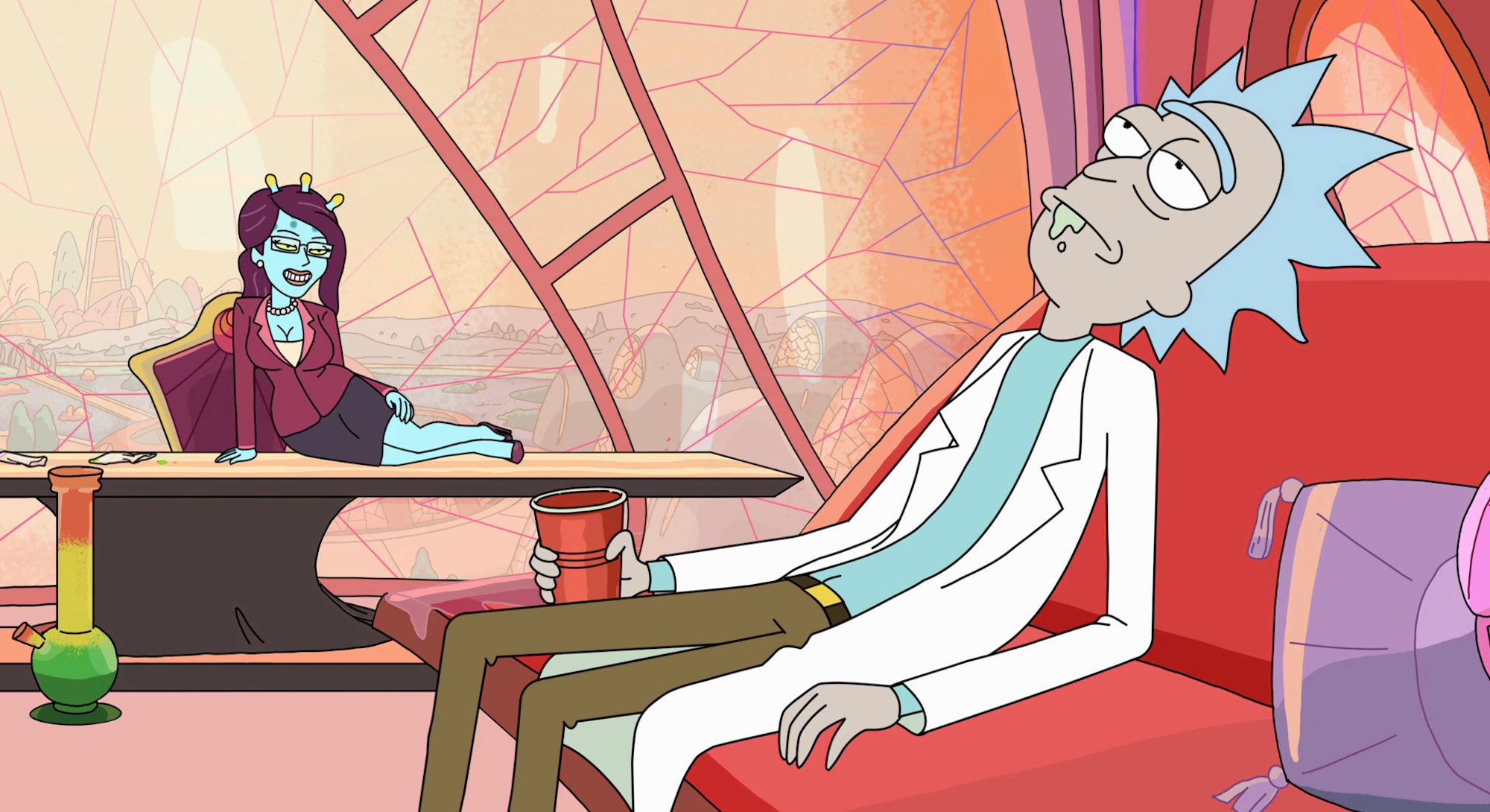 One of the most evocative moments in all of Rick and Morty deals with the very serious subject of substance abuse and its relationship with suicide. Somehow, Season 2, Episode 3 navigates these delicate topics in a neat 23 minutes of hilarious animated sci-fi featuring guest stars like Christina Hendricks and Patton Oswalt — it also led to one of the darkest Rick and Morty fan theories of all time.

“Recreational substances were phased out here,” Unity says as an old woman early in an episode. “There’s no need for escape from the self when your world is one.” Drug use is always about escaping from the self, and when Rick finally learns this lesson the hard way, it takes a heavy emotional toll.

At the end of the episode, after Rick’s gone on a bender doing drugs and drinking with half a planet, he returns home and puts a mutated alien out of its misery (more on that later) before drunkenly botching his own suicide in a moving sequence that’s set to Chaos Chaos’ “Do You Feel It?”

“I’m just speechless,” one fan wrote in a Reddit post a few years back in response to the episode. “I don’t have the emotional fortitude to do anything but rethink my life while sitting on the couch right now. This episode punched a hole straight through my chest. Up to this point, Rick’s alcoholism has been a punch line to me (now I feel incredibly guilty just typing that). In the final moments of the episode, we finally have a window into Rick’s emotions.”

Other fans have called it the most touching scene in television history. How did we get to the single most emotional moment in Rick and Morty history?

Rick, Morty, and Summer are flying through space dancing to some tunes as the episode opens. They receive a distress signal. Rick goes on a rant about how 9 times out of 10, everyone will be dead and he gets to scavenge a bunch of free stuff. This is the first of many reminders in this episode that despite Rick’s superhuman intelligence, his emotional acuity is subhuman. Later, Jerry offhandedly mentions Rick once “briefly forget the word for ‘humans’.” Even later, we see that lapse happen in real time.

Rick gets off on elevating himself above all living creatures, so it comes as no surprise that when they learn the crew of this ship is being attacked by a hive mind, it’s actually an ex-girlfriend he sees as almost equal. It’s a twist you can’t possibly see coming and one that only Rick and Morty could pull off. When she taunts him with the promise of some party drug, he says, “I can do whatever you do and more, baby.”

Except, he can’t. He’s one man, and she’s a cosmic intelligence that can override an infinite number of people.

“You’re the only single mind I’ve met that really sees the big picture,” Unity says to Rick while under the influence of fractal dust. In the same conversation, he advises her “remember to let go sometimes.”

Without Rick, Unity is focused on universal domination of all sentient beings. With Rick, she gets inebriated and loses control of thousands of people, leading to countless deaths. On the flip side, when Rick hangs out with Unity, it involves sex with hundreds of redheads after flying into a stadium on a hang glider while dressed like Uncle Sam, all while doppelgangers of his own father watch.

Rick and Morty takes an absurd premise to its breaking point and then pushes it a little bit further to see what kinds of deeper human truths it can uncover.

Sometimes, even the relationship between two people can feel like a drug, an exciting experience of utility where each party pushes the other on and encourages their worst instincts and habits. This is the fundamental nature of a toxic relationship, and it doesn’t take Morty and Summer very long before they call Rick out on this. He and Unity bring out the worst in each other. Apart, they can achieve great things, but together they push each other to be self-indulgent and reckless.

Their shared binge session drives Summer and Morty away, and it’s Unity that realizes they aren’t good for each other.

“I lose who I am and become part of you,” Unity says to Rick in her goodbye letter. “Because in a strange way you’re better at what I do without even trying.” Rick’s egomania forces everyone around him to assimilate. We see as much happen in the Smith household with their bizarre twist on the nuclear family. Everyone except for Jerry is thirsty for Rick’s approval.

One of my personal favorite punchlines in the whole series happens midway through the episode. Ever the veteran on Rick’s adventures, Morty is content to just accept this whole hive mind thing as a fact of life, but Summer sees it as the unjust subjugation of an entire species. You could make a strong argument for either case, but Rick and Morty uses this as an opportunity to convey that for Morty and Summer, it’s really about petty sibling rivalry.

Like their mother, they both spend a lot of time and energy vying for their grandfather’s attention and love. When the aforementioned binge session causes Unity to lose control of a huge swath of aliens, they regain control over their bodies and resume a violent race war over which subspecies has better nipples. Morty, who’s been cautioning Summer all long, scoffs at her shocked reaction when this happens.

Time and time again, Morty or Summer will take the short-sighted high road trying to do good in a strange situation, but when they do, it inevitably just causes more problems in the chaotic universe. Rick learned the lesson to not interfere a long time ago, leaving him jaded and uninspired.

Just shy of 3 minutes into this episode, Jerry rummages around in the garage looking for his weed-whacker — “‘Cause our weeds are wack, yo.” — and he goes through a cabinet that has two bulbs with red crystals and some kind of frozen blob.

He and Beth go on to discover an alien in a lair below the garage that eats babies and has “Space AIDs” that this smaller creature may or may not be related to, but it’s an interesting Easter egg of sorts to place this thing in this scene.

After Unity has dumped Rick, he returns home sullen, uncharacteristically avoiding all conflicts with the rest of the family to retreat into the garage. There, he thaws the creature and turns it to ash with a complex device powered by one of these red crystal bulbs. Getting progressively more drunk, he turns the laser on his own head before passing out, narrowly avoiding the beam and certain death.

The haphazard way he executes the whole thing and even the masking tape holding the contraption together is, as one fan put it, a representation of “endless genius limited only by personal faults.” Rick’s brilliant enough to do whatever he wants, but that genius is a burden.

There’s a very compelling fan theory out there on Reddit that this Cronenberg-esque creature is the malformed child of Unity and Rick on account of its humanoid skeleton. Is this him heartbroken, giving up on all hope of fixing this creature’s DNA now that their relationship is over? Or is it related to the alien that Beth and Jerry released from the basement? Or is he trying to figure out a cure for the planet that he accidentally transformed into Cronenberg monsters?

As much as we might want the logical truth behind what happened here, series co-creators Dan Harmon and Justin Roiland seem adept at avoiding definitive answers to these kinds of big questions. The pain, the trauma, and the explanation might forever be shrouded in mystery. But it’s that intrigue that keeps so many of us enthralled with Rick and Morty.