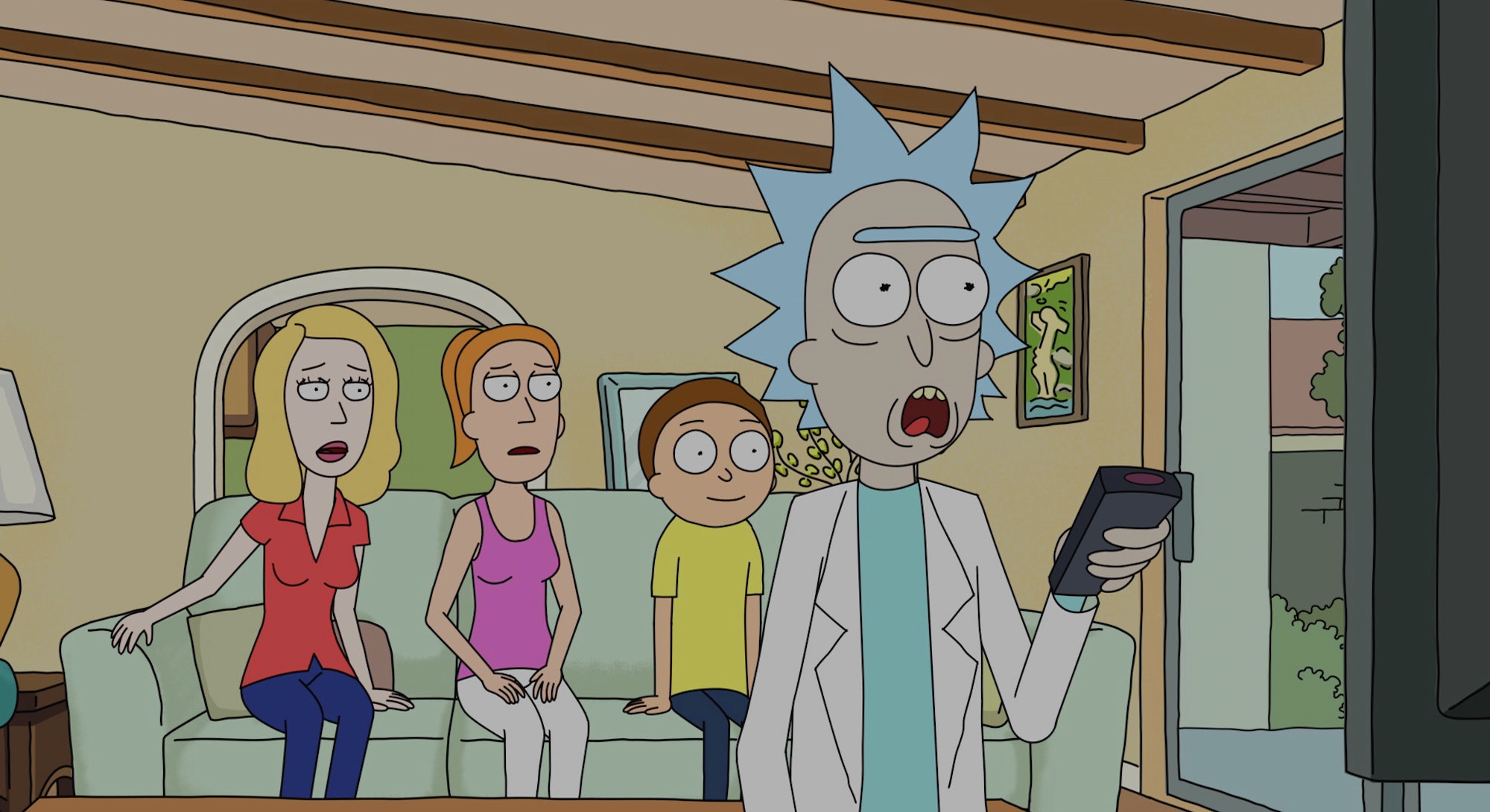 Let’s face it: Rick and Morty is better than the vast majority of television out there, but the first half of Season 1 is incredibly uneven, oscillating between “decent” and “pretty darn good.” Then came the one-two punch of “Rick Potion No. 9” and “Rixty Minutes,” elevating the series to something truly special. Yes, “Raising Gazorpazorp” is shoe-horned in between those two for some reason, but Season 1’s sixth and eighth episodes together feel like a two-parter, capitalizing on the concept of the multiverse by destroying one universe, forcing Morty and Rick to migrate into another, and then exploring the emotional fallout.

The potency of “Rixty Minutes” as a cap to this mini-arc has everything to do the oft-quoted pep talk that Morty gives to his sister towards the end of the episode: “Nobody exists on purpose,” Morty says. “Nobody belongs anywhere. Everybody’s gonna die. Come watch TV.” The “big mood” of an entire generation distilled into four short sentences.

In “Rixty Minutes”, Rick grows disgusted with inane, regular TV, so he hacks into the family’s cable box to watch Interdimensional Cable: television shows and commercials from across the multiverse. (This recurring bit is expected to return in Rick and Morty Season 4, so it’s best to brush up on it now.)

While Rick and Morty watch TV from other universes, the rest of the family gets distracted by a different invention that allows them to look through the eyes of their alternate reality selves. All of it is different shades of comedic absurdity.

Rather than feel like a filler episode with an anthological, improvisational structure, “Rixty Minutes” is a dramatic expression of the Rick and Morty multiverse executed in hilarious fashion that delivers some evocative character development.

“Who wants to watch random, crazy TV shows from different dimensions,” Rick says as one option, before adding, “and who wants to narcissistically obsess about their alternate selves?”

Do you want to peer into a universe where there’s an electronics salesman with ants in his eyes? Or do you want to witness a universe in which you’re a rich and famous actor doing cocaine with Johnny Depp? Rick — and Rick and Morty itself — wants us to choose.

All of the commercials and shows featured in Interdimensional Cable are unscripted and improvised by Rick and Morty co-creator Justin Roiland, and you can tell by the occasional hesitation in his voice or the fits of uncontrolled laughter. The jokes are funny, but it’s also brazenly apparent how much fun he’s having. It’s infectious, like when actors break character on shows like Saturday Night Live because they can’t help but laugh at the ridiculousness of what’s happening. Except in Rick and Morty, every story has peculiar body horror and/or sci-fi elements that feel unique

You get a detective with baby legs and a knockoff of the Lucky Charms leprechaun who gets eviscerated by slack-eyed children. There’s a universe where hamsters rule the world and do so while living in human butts. “Rixty Minutes” discovered for Rick and Morty that the audience delights when its jokes border on the absolutely insane, and boy does this episode drink deep from that cup.

Rather than meticulously craft segments that demonstrate the multiverse, these clips instead doubled-down on the mathematical definition of the multiverse that Rick Sanchez always touts. Infinite variations in an infinite number of realities means that there’s no way you could ever call anything unbelievable, because in at least one reality, it’s possible. They’re unsettling, unpolished, and unbelievably entertaining.

“You want to see the rough edges,” Daniel Kurland wrote for Vulture in 2016. “The commercials that the family sift through hit parodies of pop culture, explore rambling exercises in comedy, and relish in the bizarre, almost as if trying to make it a point to confuse the viewer.” Morty and Rick offer the occasional commentary, like a Garfield knock-off where all the characters have extra arms like Gazorpazorp aliens featured in the previous episode.

We have the most fun in this A-plot, but it’s actually the B-plot with Beth, Jerry, and Summer that Rick and Morty uses to define what kind of television show we’re dealing with.

Beth and Jerry never had a strong relationship in the traditional sense, as established in “Meeseeks and Destroy” and again in “Rick Potion #9,” but it’s here in “Rixty Minutes” that the prospect of actual separation becomes a possibility — albeit one that isn’t followed through on until the Season 3 premiere. However, in an alternate reality where Beth and Jerry got an abortion rather than have Summer, they’re both seemingly thriving.

Jerry does cocaine with Johnny Depp. Beth performs surgery on a human (she’s a horse surgeon in the regular timeline). Jerry tames a lion in a movie. Beth gets a Nobel prize. This sci-fi mechanic winds up feeling a lot like the toxic aspects of social media, how we’re only privy to the best moments of a person’s life without getting the full context. This initially drives a wedge between Jerry and Beth so big that they’re ready to get a divorce.

“If your father and I achieved our dreams, there’s a chance you weren’t even born,” Beth admits to Summer when she can’t find her own alt-reality self in the VR goggles. “When two people create a life together, they set aside their lives as individuals.” This very bleak interpretation of marriage and family triggers catastrophic emotional trauma in Summer, who internalizes her parents’ frustrations. She feels like she ruined their lives and decides to run away, saying she’ll “move to the southwest and — I don’t know, do something with turquoise!”

Summer can’t process what’s going on, as if she’s been punished for something completely outside her control. In this, Rick and Morty demonstrates how we psychologically process human conflict, and how damaging brutal honesty can be to children.

While Summer packs her bag, Morty’s there to console her, and his sci-fi adventures have wizened him to the ways of the multiverse. “You’re not the cause of your parents’ misery, you’re just a symptom of it!” Summer yells at Morty, a cutting insight into their twisted family dynamic that’s absolutely true.

Then Morty explains how just two episodes prior, we watched the world end in “Rick Potion #9.” In this present reality, Rick and Morty died, so that pair migrated here to go on living. “I eat breakfast 20 yards away from my own … rotting … corpse.”

In his time spent adventuring Rick with Rick, he’s experienced meaningless cruelty in the universe, and, like Rick, learned that time and energy are better spent in the pursuit of enjoyment rather than dwelling on all the suffering outside of our control. Summer’s shame and embarrassment feel small by comparison, but they’re no less valid.

No matter the size or scope of our troubles, there’s a certain kind of zen that arrives when we detach ourselves and realize that nothing happens for a reason and death is inevitable. So why not take existence less seriously and enjoy a little bit of fun TV?

There’s literally nothing more Rick and Morty than this outlook.