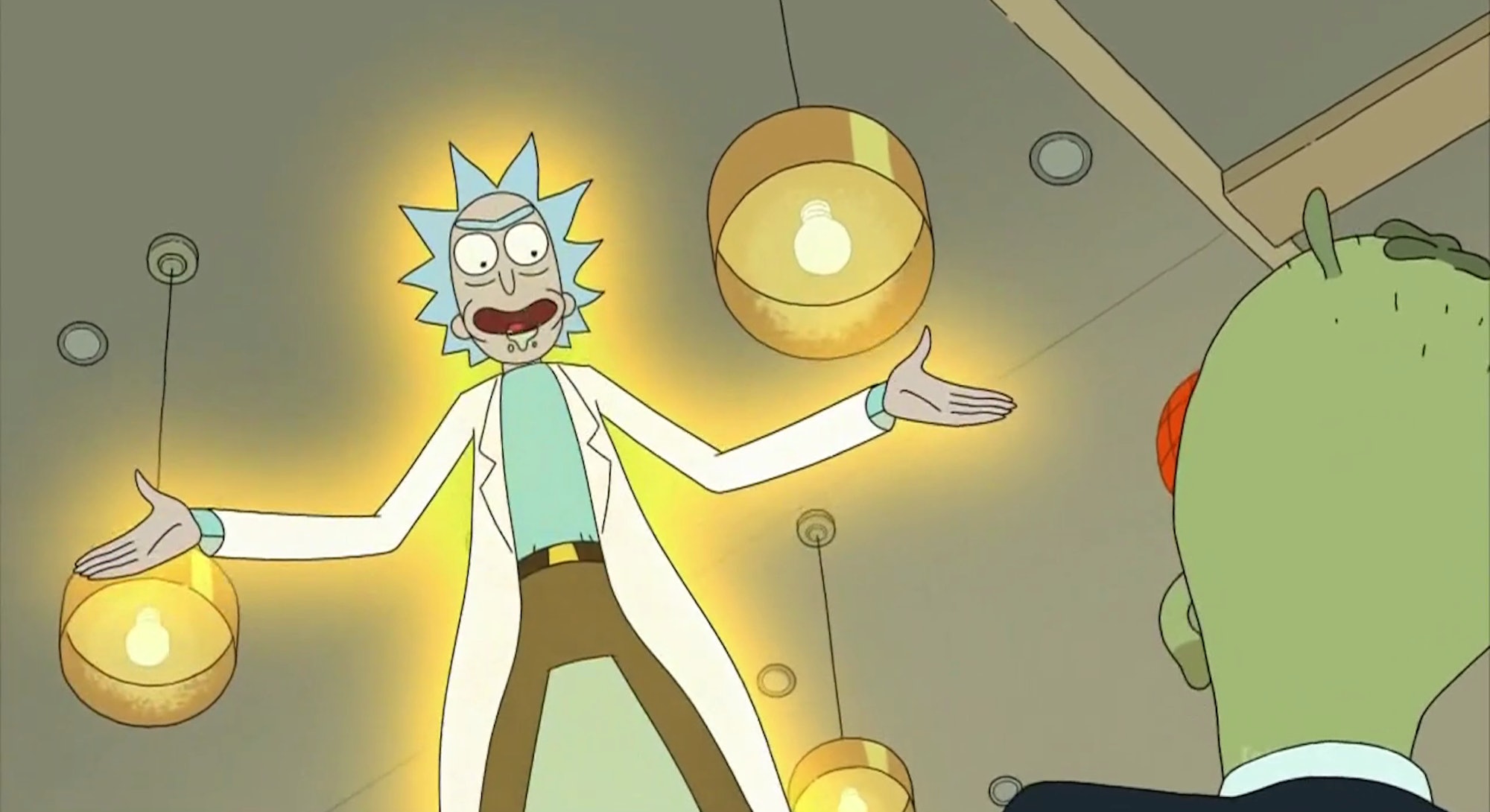 The Rick and Morty Season 3 premiere, “The Rickshank Rickdemption,” will remain one of the most important and memorable events in television history for years to come, and it’s all because of a random joke about a fast-food condiment. It’s so important, in fact, that Rick Sanchez had a legit impact on the real world.

Not only did the episode air during an unprecedented April Fool’s Day publicity stunt with no advance notice or advertisement, but “The Rickshank Rickdemption” also spawned an obsession with Szechuan Sauce so rabid that the fandom essentially forced McDonald’s to resurrect the extinct condiment. All this almost two decades after the fast-food chain last sold the sauce.

Almost three months after the episode originally aired, a fan asked Rick and Morty co-creator Justin Roiland if the sauce would play into the future of the show. Rick Sanchez himself did call it his “series arc.”

Fellow co-creator Dan Harmon explained that Roiland has an “obsessive consumer side to him,” and they infused one of his specific obsessions into Rick for the purpose of the episode. “It was a real life story that I fucking love that sauce,” Roiland explained.

Did he use Rick and Morty as a vehicle for the sauce’s resurrection? “The Rickshank Rickdemption” does dedicate almost two minutes to the joke.

Even if that’s true, “The Rickshank Rickdemption” is also incredibly memorable for the way it was executed as a season premiere.

“The Rickshank Rickdemption” first aired on a three-hour live-streaming loop on April 1, 2017 with no advance warning, advertisement, or any inkling that it would happen. Adult Swim merely published a tweet that kicked the whole thing off at 7:01 p.m. Eastern on a Saturday night.

Many fans didn’t catch on until it was too late, and most of them didn’t even believe it when somebody told them. It was April Fool’s Day. Rick and Morty was more likely to pull some kind of prank, right?

But five hours later, it was over.

Given the unnatural airing of the episode, the best way to watch the episode is how Adult Swim originally intended: sliding in at a random point in the episode and having to watch until the end to then restart immediately on a senseless, meaningless loop. That’s what I did on my first viewing at something like 10:14 p.m. that night.

“Anyway, that’s how I escaped from space prison!” Rick cheers at the start of the episode inside a Shoney’s … and then the episode proceeds to depict his daring escape from space prison. So when you watch it from the middle, the actual beginning feels like a continuation. It’s as if the script was written with the surprise-airing stunt in mind, to bewilder viewers.

So it was an April Fool’s Day prank after all.

Despite the Szechuan Sauce obsession and the unorthodox method of its airing, “The Rickshank Rickdemption” remains a damn good episode of television, packed with some excellent action pieces, tons of great jokes, and compelling character moments for everyone in the core cast.

The episode came roughly a year-and-a-half after “The Wedding Squanchers” when Rick sacrificed himself to the Galactic Federation to protect his family, and what happens in “The Rickshank Rickdemption” artfully undermines that emotional beat by hitting the reset button on the show as a whole. Rick’s convoluted breakout does the impossible by undoing the universe-altering events from Season 2, mainly his incarceration and the Galactic Federation occupying Earth.

Along the way, Rick gets a new body, cripples his two greatest enemies, and he even gives us a pretty enjoyable “fabricated origin story” that’s there mostly to titillate, and then outright troll, a fanbase that wants to know more about Rick.

Rest assured that “The Rickshank Rickdemption” is an excellent episode, but if it has one fault, it’s in how the plot recycles several concepts or jokes we’ve seen before on the show. But that hardly matters when the laughs, animation, vocal work, and pacing are as good as they’ve ever been.

The concept we’re immediately introduced to in “Rickshank” has Rick trapped inside something called a Brainalyzer. So he has to sift through his own memories with a Gromflomite named Cornvelious Daniel (Nathan Fillion) along for the ride. It looks and feels like a dream world, and it’s where the Galactic Federation hopes to find hopes to find the secret to interdimensional travel.

If that sounds familiar, it’s because the setup is identical to “M. Night Shaym-Aliens!” from Season 1 when the Zigerions placed Rick and Jerry inside several layers of simulations to acquire the recipe for Dark Matter. An alien race attempts to trick Rick into revealing some secret science he has exclusive access to, and he instead turns it against them.

We were never really learned what Dark Matter even does in Season 1, so that story felt a bit pointless. But almost 20 episodes, we’re all very familiar with the value of interdimensional travel, so “The Rickshank Rickdemption” recycles the same concept and does it so much better.

Still, the recycling would feel really derivative and self-referential were it not for enhancements like the excellent dialogue between Rick and Cornvelious Daniel, like when Rick belligerently refuses to cooperate by saying “Tough titties!” The alien responds by reminding Rick that the Brainalyzer will melt his mind.

“There’s no tougher titty than a psychotic break, Rick.”

“Well, that depends on who breaks first — me … or the titty.”

There is, however, yet another piece of recycling that’s hard to ignore.

Remember the end of “Look Who’s Purging Now”? When the primitive society of cat people that Purge once a year break down into violence after establishing peace?

“The Rickshank Rickdemption” recycles the same joke when Rick changes the Galactic Federation’s currency from 1 to 0 and we see their government erupt into violence from the top down. The context of these scenes is totally different, but the joke feels exactly the same.

In this sense, Rick and Morty isn’t immune to a common problem in many science fiction television programs. They constantly rehash old concepts, characters, villains, or even jokes, retelling the same stories until they eventually tell them better.

At least “The Rickshank Rickdemption” is capable of that, improving upon Rick and Morty’s past, achieving greater heights than “Look Who’s Purging Now” and “M. Night Shaym-Aliens!”

For these reasons and others, “The Rickshank Rickdemption” almost feels like some kind of greatest hits tour for Rick and Morty, like a show trying much harder because it’s some monumental anniversary or even the 100th episode — a whirlwind tour of memories that panders to the audience.

That grand tour continues when we go back to Cronenberg World with Morty and Summer in their b-plot, revisiting Dimension C-137 from the start of the show, as if we need a reminder of what happened way back in Season 1 in “Rick Potion #9”.

Morty brings Summer there after they exhume a Rick’s corpse to claim his portal gun. This comes off as a great point of growth for young Morty, firmly establishing a more mature perspective and character arc for him Season 3. Morty’s able to vocalize and contextualize all the issues he has with his grandfather.

“These are the parts of Rick’s adventures you don’t get to see,” he explains to Summer as they experience the apocalyptic world that Rick ruined.

All of this only speaks to the brilliance of Rick and Morty at its absolute best, even when it’s redoing some of its old jokes.

“The Rickshank Rickdemption” mobilized the show’s fandom enough to get Szechuan Sauce resurrected, and even though sauce drama ensued, the saga speaks to the power Rick Sanchez has over the multiverse.