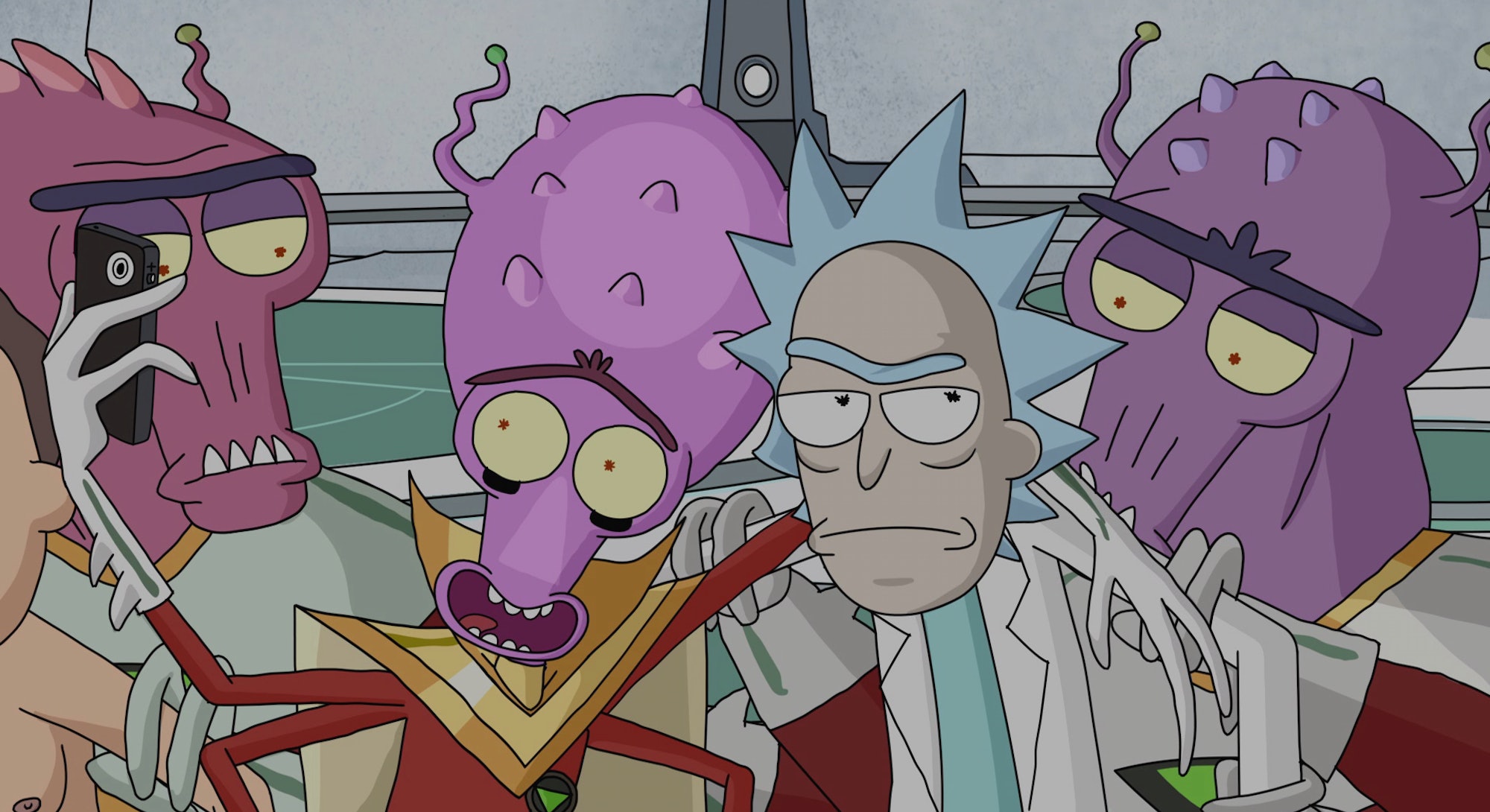 The fourth episode of Rick and Morty — “M. Night Shaym-Aliens!” — might feature David Cross as one of the show’s funniest villains ever, but in many ways, the plot’s gimmicks are better used when recycled in later episodes. In that sense, this episode is an acceptable prelude to true classics like “Pickle Rick,” “Rickshank Redemption,” and “Total Rickall,” all while firmly establishing one of the show’s staple features.

In “M. Night Shaym-Aliens!,” Rick finds himself (along with Morty and Jerry) trapped inside a simulation created by a race of alien scammers called Zigerions. However, Rick easily outsmarts the aliens — even after they reveal they’ve placed him inside multiple layers of a simulation with an impressively realistic simulated Morty. There’s a lot going on in this familiar-feeling story, especially when you revisit it after seeing other Rick and Morty episodes do the same stuff but better.

Here are a few examples that show just that:

When “M. Night Shaym-Aliens!” opens, Rick is dissecting a rat as he stammers, “This is just sloppy craftsmanship!” Years later, Pickle Rick will dismember rats and fashion their limbs into a mecha suit for himself. Rick seemingly has a thing for ripping rats open, but this moment serves a greater purpose: From the “sloppy craftsmanship” on this rat, Rick immediately knows he’s inside a simulation.

Later in the episode, Rick successfully overloads the simulation’s processor by demanding that a huge crowd of people do ridiculous things at a rap concert. This, years before he and Morty perform in the mediocre musical outing of “Get Schwifty.”.

Several Plutonians cameo on the Zigerion ship throughout the episode, and this is five episodes before Morty and Jerry actually go to Pluto.

Even the general conceit of the episode taking place inside several layers of simulations is barely different from the layered dreams we saw just two episodes earlier in “Lawnmower Dog.”. And later on, we get the layers of tiny universes within a battery in “The Ricks Must Be Crazy.”

Let’s also not forget that in the Season 3 premiere, “The Rickshank Redemption,” the Galactic Federation invades Rick’s memories trying to discover the secret to interdimensional travel — inherently similar to the Zigerions wanting concentrated dark matter. The whole simulation bit is also remarkably similar to the falsely implanted memories of “Total Rickall.”

So yeah, the list is a long one, and it exposes the sad truth that like many science fiction television shows, Rick and Morty recycles a lot of its own stuff.

All things considered, it’s as if someone ripped this Zigerion episode to pieces and scattered the innards across the rest of Rick and Morty canon where they made much better episodes.

Epic foreshadowing years ahead of time?

This episode does thrive, however, in being the very first time that we see Jerry C-137 shine as a comedic character rather than a casual punchline. And when you watch this episode knowing that this is the same Jerry who will one day become the badass king of Cronenberg World, you like him just a little bit more. Rick can easily detect he’s in a simulation that’s functioning at 100 percent processing power, but when the Zigerions dial Jerry’s simulation down to 5 percent he still has no idea. He enjoys how easy life becomes and just assumes that his luck has finally turned around.

It’s in this sense of entitlement that Jerry truly captures a specific brand of modern day toxic masculinity, the beta male who demands success for minimal work, but who’s simultaneously so insecure that he constantly questions his self-worth. He’s a real modern man.

Watching Jerry saunter out of his “Hungry for Apples?” pitch completely oblivious to the simulation is peak early-era Rick and Morty in terms of hilarity. Shoddy projections of people glitch through objects and teleport around, but Jerry doesn’t even notice. And when even Beth barely moves or speaks, Jerry’s all the more aroused with a pliable wife that doesn’t criticize him. And yet he deems the sex “too good” and self-consciously starts crying. He thinks he doesn’t deserve even this.

That doesn’t stop a bumbling Jerry from confronting his glitching boss and getting fired, rehired, promoted, and nominated for a fictional award that he makes up on the spot. Just when you think Jerry can’t get any dumber, he digs in deeper. The best day of his life happens inside a legitimately unintelligent simulation. When he delivers the same pitch to real people, they fire him on the spot. Thus begins his neverending stint of unemployment.

There’s one crucial moment that speaks volumes for the show at large about midway through the episode and it’s broader implication makes this episode totally worthwhile.

After Morty and Rick escape the first layer of simulations, Rick decides to steal processing chips from the Zigerion central processing unit because it’s the one thing these aliens do well. The pair has an impromptu snowball-type fight using the crystals, and it’s just totally adorable. They bond, they laugh, they enjoy each other’s company. What a beautiful moment between grandfather and grandson.

Rick calls Morty “a little goofball” and they wrestle playfully. “Nothing wrong with just a little bit of horseplay every now and then little fella!” Rick says before patting Morty on the head. It’s an idyllic moment that should send warning signals to any loyal viewer. Here in the second layer of the simulation, we don’t know yet that this Morty is simulation — but Rick totally does. And this is definitely the moment that proved his pre-existing suspicions. Here’s why.

“Nothing wrong with just a little bit of horseplay

every now and then little fella!”

So much of the series sees Morty struggling to gain Rick’s approval and love, with Rick saying and doing demeaning things to Morty. Rick and Morty narratively manufactures this dramatic tension that makes viewers desperately want to see Rick healed and for him to earnestly bond with Morty. We implicitly just assume Rick does love Morty, but we, like Morty want some fucking validation already. Episodes like “The Vindicators 3: Return of Worldender” like to flirt with the idea that Rick loves and appreciates Morty but would never admit it. But in reality, he’d rather fake-love Noob-Noob, a near-total stranger, than admit he loves his own grandson. He’s got intimacy issues galore.

“Pickle Rick” will later also dramatize a crucial character point that both Rick and Beth internalize the twisted perspective that to need something or someone is a form of weakness, and to be vulnerable is to be weak. So Rick would never share an honest intimate moment with Morty, but because he immediately knows that this isn’t a real Morty, he goes along with it. Because why the hell not? This isn’t real intimacy, so he’s okay with letting his guard down — but only because it isn’t real.

Isn’t that totally fucked up?

This throughline culminates in “M. Night Shaym-Aliens!” with the post-credits scene: Rick stumbles into Morty’s room blackout drunk in the middle of the night, as he’s already done countless times before. He’s totally wasted, so he’s willing to call Morty his “little friend” and say nice things like call him “a real true hero in the field” and say, “I really appreciate you, Morty!”

In the next breath, he pulls a knife to Morty’s throat. “Are you a simulation!?” he screams, “You little son of a bitch!” All this before he apologizes, calls Morty a good kid once more, and passes out on the floor.

This horrific, tenuous push and pull of intimacy mixed with malignant alcoholism and abuse pervades throughout the entire show as one of its defining features, and nowhere is it more firmly established than in “M. Night Shaym-Aliens!” But when it comes to the sci-fi gimmicks, they’re all better used in future episodes.