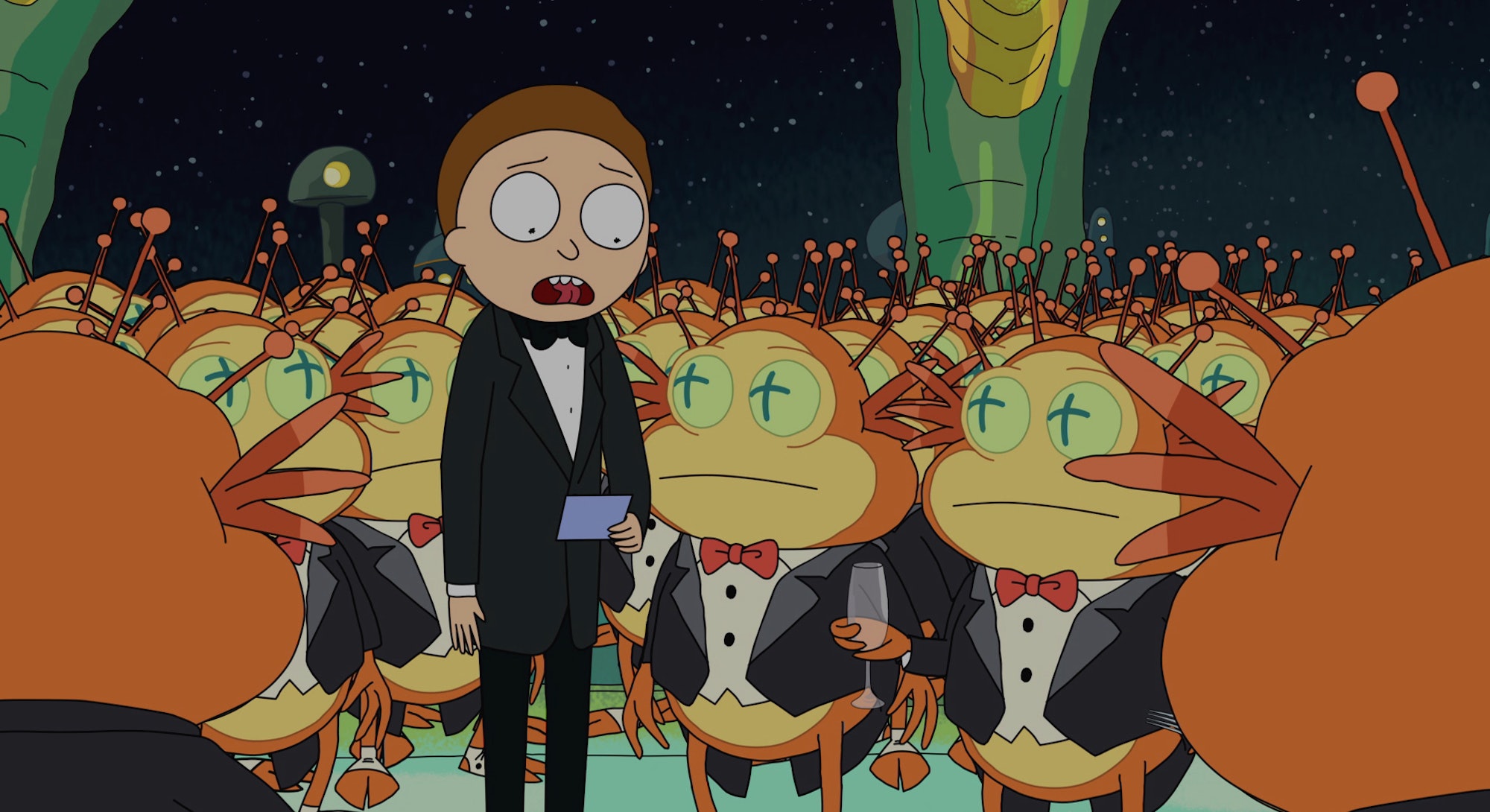 Most Rick and Morty fans probably remember “Something Ricked This Way Comes” as the one where the Devil sets up a thrift store for cursed objects. It’s a totally fine episode, with the usual good jokes and meta-commentary about storytelling itself, but largely because the plot separates the titular pair for separate, half-baked adventures, the episode falls a little flat. So even when both stories synergize as an anti-capitalist rallying cry, it’s more like a whimper.

Usually, each Rick and Morty episode has a clear A- and B-plot. Morty and Rick go off and do something, but the rest of the family has some other problem. “Meeseeks and Destroy” is a perfect example. Rick gives the rest of the family the Meeseeks Box to distract them (B-Plot) while he and Morty go on the main adventure (A-Plot). But because “Something Ricked This Way Comes” breaks up the core duo, with Morty off with Jerry while Rick hangs with Summer, the dynamic of this episode feels totally off.

So, when Rick Sanchez competes with a character lifted straight out of Stephen King’s Needful Things for less than 10 minutes, is that the A- plot or the B-plot? How about when Morty and Jerry offer social commentary almost a decade too late by debating the planetary status of Pluto?

Jerry: “That’s right. It’s possible to disagree in science, Morty. Pluto was a planet, some committee of fancy assholes disagree, I disagreed back.”

The ultra-rare Morty-Jerry adventure does indeed bring them to Pluto where the locals are desperate to get their home reinstated as a legit planet, and for some reason they think Jerry can help. For those of us old enough to remember Pluto’s demotion to “dwarf planet” in 2006, this jokey setup warrants a half-hearted giggle. But for younger Millennials and those Gen Z chuckleheads, this one’s probably a real headscratcher. It really dates Rick and Morty as a whole, and even though Morty gives us the bullet points of what happened in 2006 in a slice of exposition, I can’t help but imagine how little audiences of the future will care about all this.

Do kids still learn about the planets in school? I genuinely don’t know, because all I remember from my own childhood education was dinosaurs, ancient Egypt, memorizing the then nine planets, the now defunct food pyramid, and practicing “Stop, Drop, and Roll” with enough frequency that I genuinely believed adults caught on fire regularly.

But more importantly: Does anybody still care about Pluto here in 2018? What will they think in 2028 when Elon Musk mines Pluto dry for its alien resources? The Rick and Morty writers really want us to care, but “Something Ricked This Way Comes” doesn’t do enough to convince us.

“Something Ricked This Way Comes” does open on some classic Jerry-negging and the beloved Butter Robot’s existential crisis for some good starting jokes. Morty has to do a science project for school, but rather than make the obvious choice of working with Rick on it, he gets roped into some bonding time with Jerry.

They get into the planetary debate and even bring up the 2006 incident of Pluto’s demotion. “Pluto was a planet, some committee of fancy assholes disagree, and I disagree back,” Jerry rationalizes. “If it was a planet, it can be a planet again.” Jerry says he was taught this in the 3rd grade and refuses to accept that things can change. He essentially refuses to “learn” anything new, so he’s once again presented as one of the few constants on the show, albeit one that’s mind-numbingly dumb.

Jerry’s so stupid and stubborn that he makes this entire science project bonding session about him, putting up such a stink by harassing NASA that he gets them both abducted by the alien king of Pluto named Flippy Nips. He panders to Jerry’s fragile ego, treating him like a revered scientist as a publicity stunt for the ~dwarf~ planet.

But things actually get a tiny bit interesting when scientist Scroopy Noopers reveals to Morty that the ongoing mining of Plutonium by the wealthy upper class has actually caused Pluto to shrink over the years. Pluto got demoted by Earthlings because it’s actually smaller than it used to be.

Jerry’s never dumber than when he’s leaning into his 15 minutes of fame, saying things like, “Sometimes science is about conviction!” (as opposed to science being about … scientific facts). And there’s nothing more Jerry than when Morty publicly confronts him with said scientific facts, and Jerry simply embarrasses Morty by publicly telling a story about how Morty once threw his poopy diaper out the window.

Everything ends in a predictable manner: The truth comes out, Morty abandons his dad, and Jerry gets beaten up before also returning home. This is classic Rick and Morty Story Circle structure here. And it isn’t until the very end that this plot’s core theme connects to the alternate plot focusing on Rick, Summer, and the Devil. More on that later.

Meanwhile, Summer got new job is at a shop called Needful Things, a store owned by the literal Devil in a storyline that’s straight out of the Stephen King book. All of the objects he gives away are cursed, offering some kind of boon at a hellishly ironic cost. A microscope he gives Rick can “see beyond comprehension” but it also would have made him super-dumb. An aftershave given to Mr. Goldenfold made women love him but also made him impotent. Rick realizes he can scientifically remove these curses and reverse negative effects, and he does this in a competing shop to make a ton of money.

Rick vs. the Devil is fun enough, especially when they get in a slap fight. But this is a plot so simple and quick that even Rick gets tired of it and burns his own competing shop down, proving forever that he’s Chaotic-Neutral to the Devil’s Neutral-Evil. If there’s one good thing going on in this story for the show’s greater continuity, it’s that it offers up the first real Summer-focused story and a bit of bonding between her and Rick. (She is perhaps my favorite character, by the way.)

Also, this brief shot is a total treasure:

The episode’s weirdest moment comes when the Devil fails at beating Rick, so he tries to hang himself. After Summer saves him, he says. “People like Rick are making me obsolete. I mean seriously. I may be the Devil but your grandpa is the Devil.”

Compared to the devil, Rick, the extreme embodiment of brilliance and nihilism, is a much more interesting villain. It’s as if the Rick and Morty writers are calling the Devil totally lame, both as a character and as a storytelling conceit, all the while making Rick’s pedestal only higher.

So rather than grapple with morality, corruption, and evil — like those more traditional Devil stories — the show has to opt for a more oddball approach: Rick is immune to the Devil’s charms and curses, and the Devil becomes an impotent character who’s driven by selfish, capitalistic enterprise. Even if he markets in souls instead of cash, the sentiment remains consistent.

Therein lies the ultimate connection to the whole Pluto plot: While capitalistic greed gradually destroys Pluto and degrades its standing in the Solar System, a comparable kind of greed from the Devil literally curses people. We’re a couple layers deep into analysis here, but despite the two core stories of “Something Ricked This Way Comes” feeling outdated and boring, the ultimate point is one that juxtaposes capitalist pigs with the literal Devil.

We see as much in the finale: Summer helps the Devil build up the n33dful.com digital empire, and he kicks her out just after he’s bought by Google. “You’re Zuckerberging me!?” Summer cries as she’s carried away by security.

Yes, Rick and Morty equates the founder of Facebook with the Devil, and it puts him in a Steve Jobs turtleneck. The end of the episode makes an attempt at tying together the disparate plot threads to make a convoluted point about the evils of capitalism, mixing together corporate greed, fossil fuels, Mark Zuckerberg, Facebook, Apple, and the Devil himself in a blender and hitting the frappe button.

So the surface level plots of “Something Ricked This Way Comes” feel pretty boring, with one being more derivative than it is subversive and the other being a long-winded joke about something that happened in 2006. Still, the point they both aim for was worth hearing when this episode first aired in 2014 and it’s one that’s even more relevant today.

Let’s not forget the final sequence that lumps even more evils into the mix, when Rick and Summer bond by doing steroids and getting jacked enough beat the crap out of the Devil, a Neo-Nazi, a bully, a homophobe, and a dog abuser. Rick and Morty makes a clear distinction about what’s evil in this universe while simultaneously exulting Rick.

As is the case with many anti-capitalist stories, our hero Rick’s solution is to burn it all down, but when the episode throws this much into the mix, the ultimate message gets lost in the fire. So we have to settle for a few laughs before walking away from what’s honestly one of the more forgettable episodes.