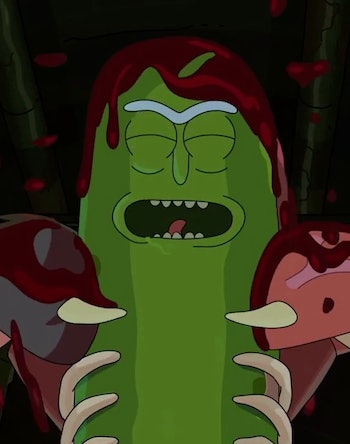 You can watch the episode and acknowledge that Pickle Rick is a total badass capable of murdering hordes of rats and fending off a dozen armed thugs, all of which glorifies Rick at his most physically compromised yet astoundingly resourceful.

But, the greatest image we should remember of Pickle Rick is not when he erupts triumphant from a toilet like an explosive green turd in reverse, it’s when we watch him mansplain his contempt for therapy while dying in the middle of a session all because he was too arrogant to talk about his feelings — and when the therapist calmly returns fire.

“Pickle Rick” is also Rick and Morty at its most meta-contextual without actually breaking the fourth wall.

When Rick Sanchez calls his grandson into the garage at the start of the episode for the “big reveal” that he turned himself into a pickle, he demands that Morty be impressed.

Morty asks about the perks of being a pickle, Rick says, “Stop digging for hidden layers and just be impressed.” Morty’s the viewer’s stand-in as always, trying to figure things out as we go, but he’s also fatigued by Rick’s antics, paranoid that there’s some prank about to happen (“Are you invisible and you’re gonna fart on me?”)

But rather than be genuinely impressed by this peculiar new development, Morty’s expression conveys skepticism and worry.

“Pickle Rick” is not just a story about a guy who gets himself into a figurative pickle because he literally turned himself into one. I love a heavyhanded pun more than most, but even I can look past that to see that this is a thoughtful, nuanced story about the important practice of ongoing self-care.

Most people love this show for its absurdism, its pure insane randomness in an increasingly bizarre universe. So much of what we see from moment to moment, episode to episode, is borderline incoherent. But you don’t really need to know the deeper meaning of how or why this universe works when it’s so damn fun. In this way, Rick and Morty communicates the premise that because nobody and nothing matters — and that none of us are in control of what happens to us — then you might as well pursue that which you think makes you happy.

That’s the essential philosophy of nihilism, one that Rick adopts because of all the insane things he’s seen and done in the multiverse. We see this on display during “Pickle Rick,” but the episode also explores how that philosophy compromises Rick’s psychology.

The story also elucidates in dramatic fashion all the ways people would rather engage in self-destruction before facing their truer demons. The conflict that Rick Sanchez prefers is an adventure that risks his life in bloody, violent fashion. Working through more mundane interpersonal conflicts with his family is just so boring. This is conflict avoidance through conflict, which makes this a potent lesson in dramatic irony at every turn.

This is already awesome storytelling, but “Pickle Rick” doesn’t stop there.

The bulk of this episode shows Rick in increasingly dangerous circumstances as he’s stripped of his usual resources. Rick and Morty creatives have cited 127 Hours and that Breaking Bad episode when the Winnebago breaks down as inspiration for this story. Put capable characters in direr situations to see how they handle the challenge, all while exploring how that might compromise their morality, psychology, or relationships.

Rick’s very first threat — after Beth takes his special syringe — is the neighbor’s cat Izzy, who knocks him into the driveway. But then Rick falls into the sewer and gets accosted by the aforementioned rats and armed henchmen on some generic compound. Impossibly, he winds up building a laser out of spare office supplies, one capable of melting through two peoples’ heads. The stakes increase exponentially. Even for Rick and Morty, the whole sequence of events is totally absurd and violent, which only emphasizes everything Rick is willing to go through rather than actually go to therapy.

The quality jokes just keep coming at every turn, especially after things spiral out of control to become a full-on action movie in the classic sense, totally indulgent and hyper-masculine, complete with a broad-chested villain voiced by Danny Trejo. Every joke targets typical action movie tropes, reinforced by the fact that this all stems from emotional avoidance. The story is Die Hard-AF, complete with its hero’s lack of empathy and how he struggles to connect emotionally, even with the people he loves.

Inevitably, Rick has to follow his family to therapy in order to get the serum to turn himself back into a human, and his brief exchange with Dr. Wong effectively communicates the burden of intelligence.

When asked why he didn’t want to come to therapy, an exasperated Rick expresses his disdain for the practice. “Because I invent, transform, create, and destroy for a living,” he says. “And when I don’t like something about the world, I change it.” He simply doesn’t see the utility of understanding feelings to make people more comfortable.

Dr. Wong’s response is to explain that the entire family uses intelligence to justify sickness. “You seem to alternate between viewing your own mind as an unstoppable force and as an inescapable curse,” she says. He is simultaneously invigorated by his achievements and repulsed by the misery he forces upon himself as a result. Even she recognizes the irony of him “dripping with rat’s blood and feces,” saying, “Your enormous mind literally vegetating by your own hand.” He is the ouroboros literally eating itself alive.

Perhaps the most cutting assessment Dr. Wong makes is that therapy is “NOT an adventure … It’s just work.”

Because both Rick and Beth put such value on intelligence, they perceive this kind of work as something that’s beneath them. To need someone or something is to demonstrate perhaps the worst kind of weakness. It makes the final scene of the episode totally heartbreaking when Summer and Morty communicate that they want to keep going to therapy, but their parental role models dismissively make plans to go out drinking.

Rick Sanchez might not realize it for himself, but at least he can teach us this in real-life: The most dangerous thing in the multiverse has nothing to do with aliens or transcendent beings. It’s the self-destructive nature and immense fragility of the human psyche, and how we all slip back into our same bad habits as part of a vicious cycle.

These behavioral patterns seem pretty inescapable for just about anyone, so maybe we should all consider therapy?