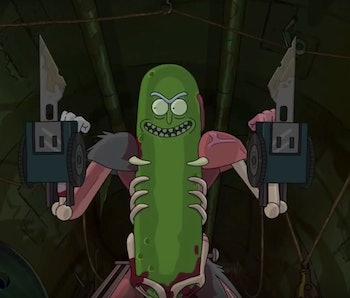 When Pickle Rick battles a dozen rats on Rick and Morty, the encounter escalates quickly from briny fisticuffs to screw-shooting gauntlets, and then to Pickle Rick using X-acto knives attached to the same gauntlets to rip the rats to shreds. It’s all a bit much, and as it turns out, the grisly scene was originally going to be twice as long.

Calling Pickle Rick’s first confrontation a “battle” isn’t really fair to the rats, which pretty much get mercilessly slaughtered.

Henrique Jardim, one of Rick and Morty’s storyboard artists, revealed via Twitter Monday that the horrific fight was originally twice as long.

In “Pickle Rick,” insane but brilliant scientist Rick Sanchez turns himself into a pickle to avoid going to family therapy. What ensues is a survivalist adventure that starts in the sewers near the Smith family household and eventually moves to some bizarre high-security, para-military compound. Along the way, Rick upgrades his pickle body using roach and rat body parts, along with spare office supplies, fighting roaches, rats, Russian special agents, and Danny Trejo’s Jaguar.

The scene in question — which was revealed via the original storyboard back in 2016 — quickly establishes Pickle Rick as an intensely brutal character in one of the series’ most violent episodes.

Later, Pickle Rick somehow manages to build a beam laser out of parts from a laser printer, powered by AA batteries. He even uses it to melt through the heads of generic Russian agents. But, by far, the most difficult scene to watch is the one in which Pickle Rick beats, bludgeons, and totally shreds a bunch of rats in the sewer just after building his armor.

Check out the storyboard to final product comparison from Henrique Jardim right here: