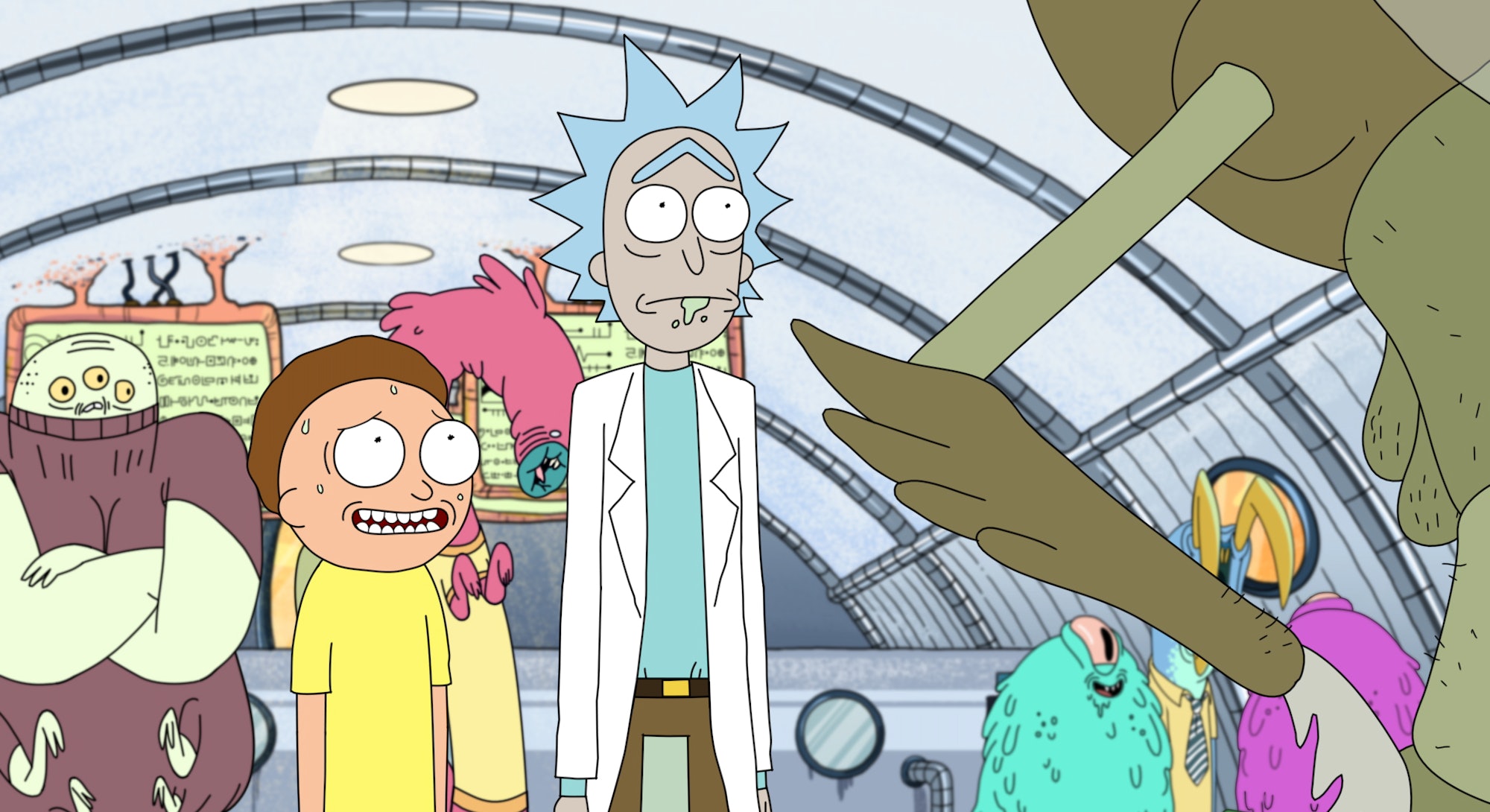 The first scene in all of Rick and Morty — the show’s inaugural cold open — has a totally drunk Rick drag a pantsless Morty out of bed in the middle of the night, threatening to blow up the world before passing out in a drunken stupor. Then, they go on a strange interdimensional adventure while establishing the dynamic of the whole family along with Rick’s disbelief in God and utter contempt for traditional education.

A googly-eyed and totally drunk grandfather bursts into his grandson’s room in the middle of the night, spilling liquor everywhere, and this is how a veritable media sensation begins. Like any pilot episode, “The Pilot” of Rick and Morty struggles through typical growing pains of any new show.

The core of Rick and Morty lies not in Morty’s insane adventures with grandpa, but in how this helplessly mistreated kid is desperate for love, companionship, and ultimately, respect. You don’t realize this until much later in the series, so in the “Pilot” episode, all that you really see of that nuanced relationship is Rick forcing Morty to stick a couple big, spiky seeds way up into his butt.

Still, the first episode establishes the basics of the Smith/Sanchez family dynamics. Morty’s bumbling around and totally desperate for attention he doesn’t get from anyone. His sister Summer is just SO annoyed with everyone around her and the stereotypical contemptuous teenager always on her cell phone. Their parents have a deeply troubled marriage with issues that are only compounded by Rick reappearing after abandoning his daughter Beth years ago. Not unlike Morty, Beth is desperate for Rick’s approval and love, and the old scientist totally takes advantage of that. The moronic Jerry is helpless in protesting their adoration of Rick, and he himself bumbles through life.

Rick is at the center of it all, utilizing his genius to control this entire household to get what he wants, and what he wants right now — and for the entire show — is to have Morty as a sidekick. So despite Jerry’s legitimate protests, Rick finds a way to get what he wants despite being a totally toxic presence in Morty’s life.

Do it for grandpa, right Morty? When they’re pointy and painful in your butt, “That means they’re good ones!”

Maybe this criticism makes me a prude, but I often think about how I started watching both Rick and Morty and Black Mirror in the same week sometime in 2014. I’ll never forget the weird resonance of these two sci-fi shows and how they unabashedly went all-in for their pilot episodes.

Each story feels like something better-suited to much later in the first season — or even the second season — because they come off as alienating and off-putting to newcomers. I’m speaking, of course, about how the Prime Minister of the United Kingdom is forced into having sex with a pig in Black Mirror. Morty being forced to smuggle a giant, spiky alien seed up his butt is nowhere as bad, but it’s still a bit much.

Rick and Morty co-creators Dan Harmon and Justin Roiland broke and wrote their pilot episode in a single afternoon, which is damn impressive. But, nobody can refute that their very first episode lacks the polish and confidence of later stories. This episode tries too hard to shock and impress the viewer. Rick comes off as a one-note crazy person with no depth to him at all.

Even the animation style looks a little too wacky, especially in how often Rick’s lips consistently discover new and even grosser ways to drool. That is indeed part of the fun in some early episodes when Rick and Morty is a lighthearted and insane adventure, but this show would never have become such a phenomenon unless it transcended into something more complex and brilliant. “Pilot” is a decent episode of television, but it’s a far cry from Rick and Morty at its best.

Still, you can see why people took an early shine to the series, especially later on in the series premiere when Morty and Rick get to interdimensional customs, run by the Gromflomites of the Galactic Federation. That’s when we start to truly appreciate the zaniness of the multiverse here. The aliens are so grotesquely and bizarrely different that the absurd vastness of this Rickstaverse finally beings to crystallize.

“I don’t like being told where to go or what to do,” Rick says at customs. “I see it as a violation.” And when they have to make a run for it to avoid getting arrested, the chase scene is full of visual jokes — like the one featured above.

But perhaps the best moment comes when Rick straight-up lies to Morty about the soldiers being “robots” when he tosses him a gun, and Morty unwillingly starts killing soldiers. This is a pivotal moment for young Morty as he ascends from a position of being totally overwhelmed by his grandfather’s plans to being an active participant in the chaotic, hyper-violent multiverse.

Ultimately, by the end of the episode, Morty is convinced that his parents don’t believe in him, but that Rick does. When Morty winds up spitting out random genius facts, Rick spins Morty’s seemingly magical brilliance as the product of them spending time together.

But the final note of the episode subverts this by revealing the truth: The Mega Seeds dissolve in Morty’s butt, giving him temporary brilliance. So Jerry and Beth walk away thinking that Rick is good for Morty’s intelligence. Here we have an essential foundation for the show’s conceit, allowing this poor young kid to go on tons of adventures with his grandfather, all because his parents are so wrapped up in their own insecurities and relationship problems to really do any accurate parenting.

“Rick and Morty forever!” Rick shouts in a deranged rant as the garage door closes to end the episode. “Pilot” might be a far cry from the greatness that Rick and Morty would go on to achieve, but it was a good enough start that Rick’s dribbling prediction would become a reality. They’re making 70 more episodes, after all.