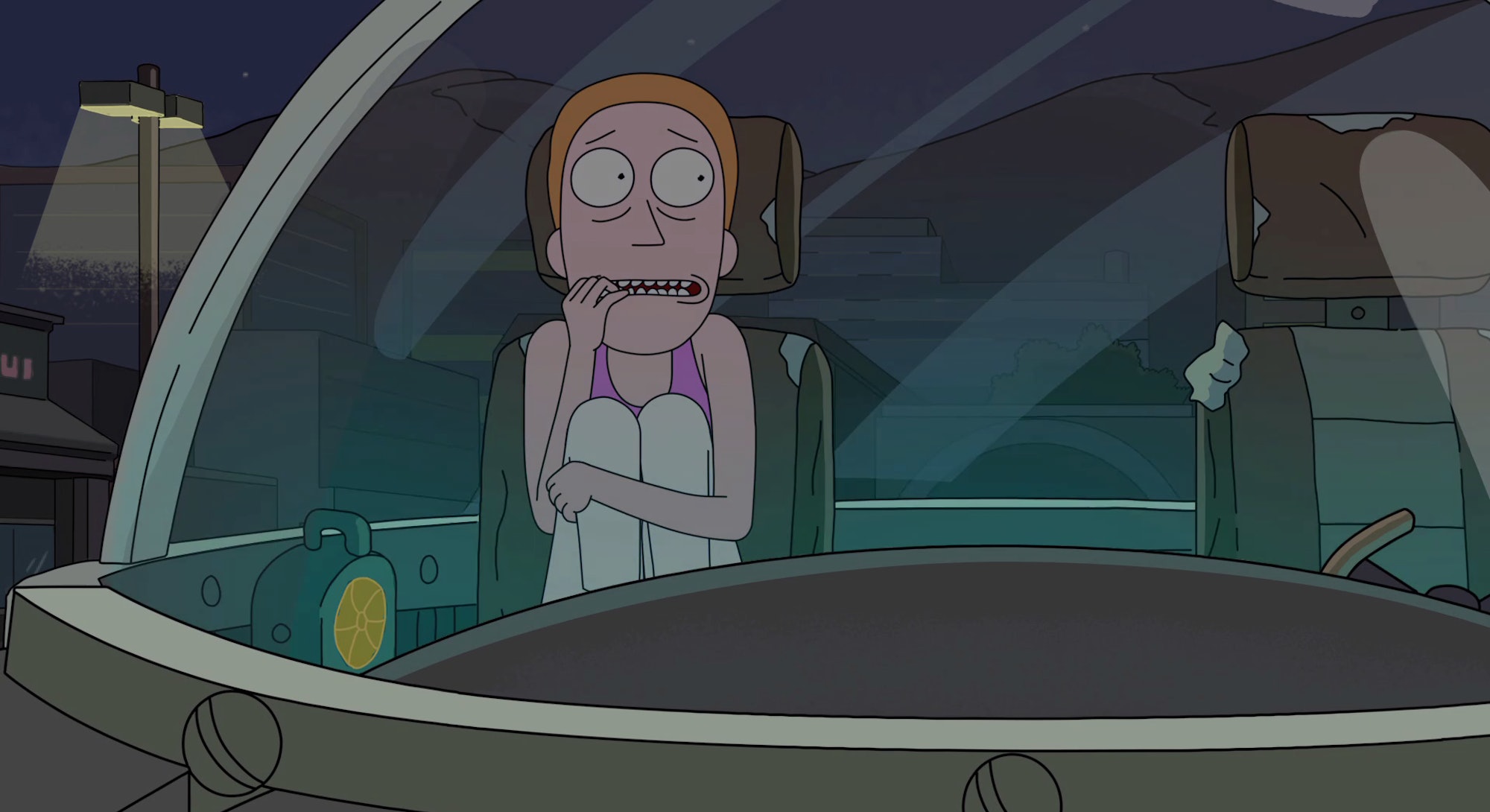 How far can a show take one clever, trippy premise? On a less capable series, episodes like Rick and Morty’s “The Ricks Must Be Crazy” (Season 2, Episode 6) could have been a disaster. But in the hands of Dan Harmon, Justin Roiland, and lead writer Dan Guterman (who also wrote “Interdimensional Cable 2”), the story of Morty and Rick going inside the microverse battery of Rick’s car artfully layers joke upon joke as it dives deeper into a series of concentrically smaller universes, but it’s the episode’s B-plot happening back on Earth that had the biggest impact on popular culture.

“Keep Summer Safe” is one of the most widely recognized phrases from Rick and Morty, mostly because Rick’s car keeps repeating the phrase throughout the episode. Elon Musk loved the bit enough to give Teslas a “Sentry Mode” that can be triggered using the same phrase. At the very least, Musk can appreciate “The Ricks Must Be Crazy” as one of the tightest and smartest episodes of Rick and Morty ever.

The episode’s quality must have something to do with it being the only one that doesn’t show Beth or even someone mentioning her. Jerry is similarly absent. And because Summer’s story doesn’t involve any physical travel, the episode devotes more screentime than usual to the A-plot adventure.

But what really elevates “The Ricks Must Be Crazy” (aside from some excellent voice-acting cameos) is the layers of comedy that build as Rick and Morty dive deeper into the microverse. Individual jokes land multiple punchlines at once. It feels like watching a brilliant balancing act unfold in comedic form — even if we should all be a bit disturbed by Elon Musk’s affection for a car that uses a laser to mince a man into a thousand bloody chunks.

The episode opens with Summer, Morty, and Rick walking out of a movie theater having just seen Ball Fondlers: The Movie in an alternate universe where that franchise exists and there are giant telepathic spiders. (You might remember Ball Fondlers’ debut in Season 1’s “Rixty Minutes” as a knock-off of The A-Team). Rick makes fun of Morty for throwing a random sci-fi word in front of a normal word, a meta-comment on how Rick, and the show in general, always communicates new ideas. Then the episode introduces perhaps Rick’s crowning scientific achievement, ironically named the “microverse battery.”

“I put a spatially tessellated void inside a modified temporal field until a planet developed intelligent life,” Rick explains.

This sounds like gibberish, that Rick “yaddy yaddy yaddahed” a microscopic universe into existence so he could enslave its inhabitants as a power source. What Rick is literally saying is that he somehow harnessed space-time to compress an infinite universe into a box, and he accelerated the flow of time until intelligent life developed. Appearing as God to these people, he gave them “Gooble Boxes” with foot pedals that generate electricity. They use this as the technological cornerstone of their entire culture, but 80 percent of that power goes to Rick’s car.

“That just sounds like slavery with extra steps,” Morty critiques when Rick rationalizes that these people are no different in the cosmic scheme of things compared to any other society. People live, people procreate, people die, and everything keeps going.

The whole idea for this concept is an Interstellar-tier cerebral twist. Yet rather than bask in the radiant awe of his own achievements, Rick is irreverent. He tells these people that “fuck you” means “much obliged” and that flipping someone off means “peace among worlds.”

The trouble starts when scientist Zeep Xanflorp (Stephen Colbert) comes up with the exact same idea as Rick, except the Microverse is now a Miniverse and there’s a Flooble Crank instead of the Gooble Box. Because Zeep uses this Miniverse as a near-infinite power source for his world and people didn’t stomp their Gooble Boxes, Rick loses all power in his Microverse battery. Wielding Morty’s words like a blunt instrument, Rick criticizes and bullies Zeep into bringing them inside the Miniverse.

Yes, Zeep Xanflorp is exactly like Rick, and on a quick adventure into the Miniverse, they meet Kyle, the ghostly Rick-like figure who developed a Blooble Yank to power the Teenyverse he made. Rick’s hypocrisy is the main punchline throughout all of this because no matter how deep this rabbit hole goes — they go months trapped in the Teenyverse after Kyle kills himself in an existential crisis — he’s only out to fix his battery. He’s perfectly content to damn entire cultures and universes to a bland existence of slavery to meet his own ends.

We have to admire and respect Rick for his scientific achievement, but Zeep and Kyle are a reflection of Rick’s inhumanity. If ever there was an episode that should make you see Rick as a despicable person, this is it. He wastes at least half a year in the Teenyverse battling Zeep in shoddy wooden mecha when they could have been working together to get them all back to their own worlds.

The enlightened tree people of the forest understand the pettiness of their competition, but when Morty appears as their leader, we learn that their wisdom is defined by their savagery: they devour every third baby to make fruit grow bigger.

Rick and Morty is always at its best when it defies our expectations. Conventional narratives might predict that Rick and Zeep would learn a lesson from these people, but Rick never learns any lesson. His unchanging nature is a big reason why the show is so entertaining, especially when he still manages to surprise us so often.

The ongoing physical battle between Rick and Zeep is one of the best fights in the entire series, ending with Rick removing his lab coat to kick Zeep’s ass with old fashioned fisticuffs, wrapping things up by spitting on his face. In perhaps no other episode is Rick and Morty more nihilistic, portraying Rick as a god in a godless universe where his brilliance gives him the opportunity to do whatever he wants.

In this case, it’s to enslave, belittle, abuse, and spit upon an entire culture that he created. Is there anyone worse than Rick Sanchez in the entire universe? Probably not.

Watch “The Ricks Must Be Crazy” on Hulu.