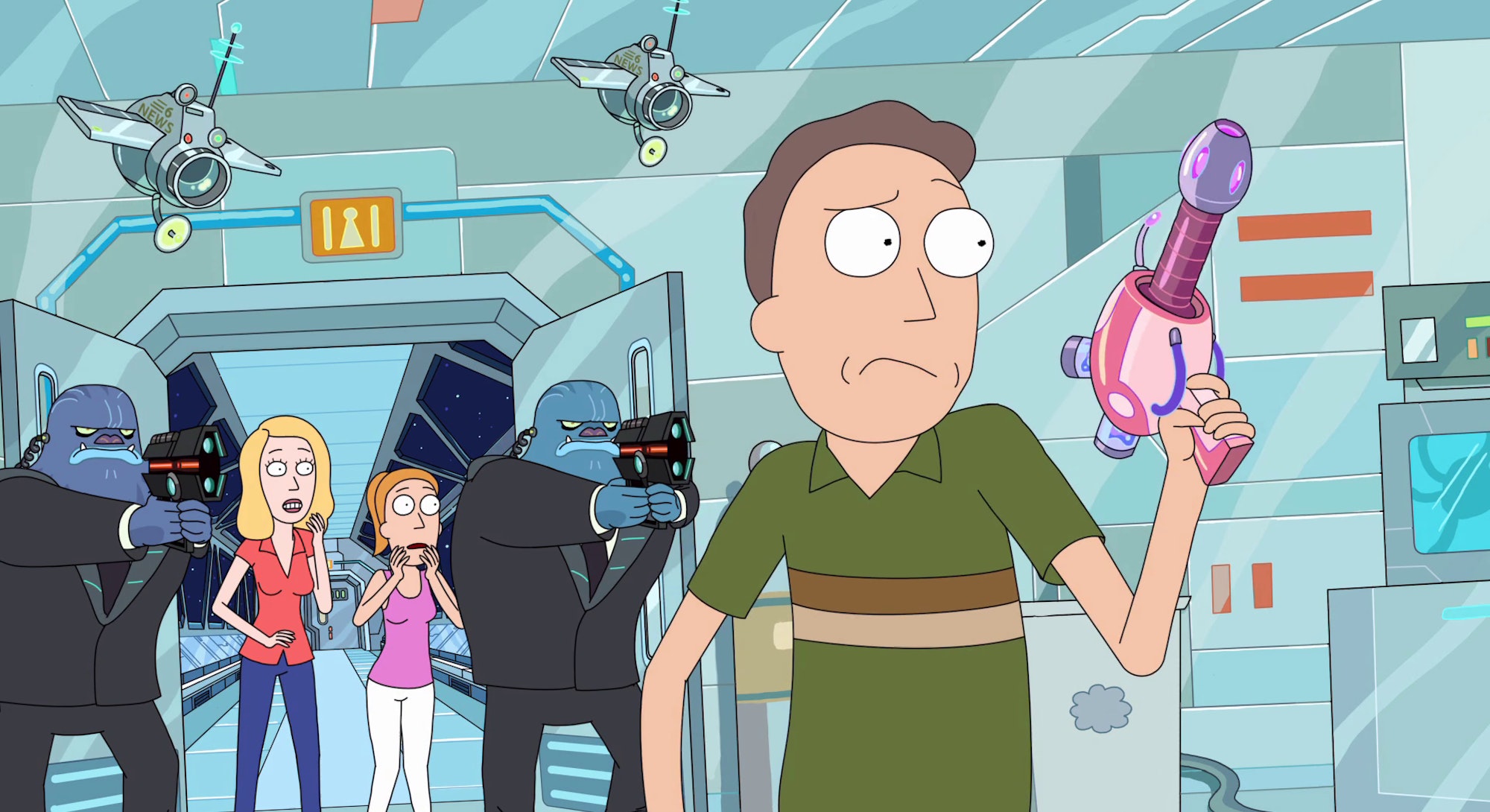 Is it better to sacrifice one for the good of many? What if the guy’s a total loser anyway? That’s the very serious, deeply moral question at the heart of “Interdimensional Cable 2: Tempting Fate,” one of only two Rick and Morty episodes to pick up a TV-MA rating from the FCC. Is that because of the foul language? All the dick jokes? The extreme violence? All three?

Because this is Rick and Morty, the utilitarian moral dilemma here involves whether or not Jerry Smith is willing to sacrifice his human penis to save the dying heart of Shrimply Pibbles, an alien civil rights leader dubbed “the most important man in the universe.” Somehow, the physiology works out perfectly. So what kind of man would make this sacrifice to preserve the good of the universe?

Even though he can get a complex alien prosthetic to replace his sexual organ, Jerry eventually refuses, but then goes back on the choice to make himself feel important. His indecision and stubbornness create a frustrating amount of inner turmoil that eventually leads him to publicly shame Shrimply Pibbles (he fails at that too because Jerry). In his mind, this would absolve him of his commitment, all this rather than to just be honest about his reservations.

Yes, this is a hilarious circumstance to see Jerry, of all people, in. But as the A-plot, it just unfolds like one long joke about one man’s pathetic sad genitals. Watching Jerry’s petulant attempt at boosting his ego get gradually overtaken by his meekness and anxiety is fun, but only as a punchline. Spending half an episode on it feels like a bit too much, though it does result in some tremendous jokes.

In one scene, Shrimply Pibbles (voiced by Werner Herzog) explains to a group of aliens why no human would even willingly give up his penis:

“I’ve dwelt among the humans. Their entire culture is built around their penises It’s funny to say they are small, it’s funny to say they are big. I’ve been at parties where humans have held bottles, pencils and thermoses in front of themselves and called out, ‘Hey, look at me! I’m Mr. So-And-So Dick! I’ve got such-and-such for a penis!’ I never saw it fail to get a laugh.

The expectation of all these aliens that Jerry won’t do donate his penis is what initially makes him that much more stubborn about doing it. But as soon as things get serious, he drags Beth into the mix to bail him out of this mess. Beth always relishes in the opportunity to take her anger out on somebody, and Jerry knows he can use this to his advantage. He’d always prefer his wife fight his battles for him.

When Beth berates the doctor for trying to take her husband’s penis, it really speaks to the codependent nature of her toxic relationship with Jerry, which was dramatized in spectacular fashion in “Big Trouble in Little Sanchez,” the episode immediately preceding this one.

But Beth also knows that Jerry’s utterly incapable of assuming responsibility or being assertive. He’d much rather rely on the sympathy of other people to get something done.

Is there anything better than Beth fighting Jerry’s battle for him until she’s enticed by the catalog of his potential replacement parts? Once she realizes what she stands to gain from the surgery, Beth unceremoniously throws her husband under the bus.

Except, just kidding! Because it’s an alien hospital, these stakes are meaningless and undone by magical space medicine all in a matter of seconds. So the character arc and lesson ultimately feel pretty weak here.

The first interdimensional cable episode, “Rixty Minutes,” packed the emotional punch of Beth and Jerry discovering their alternate lives and recognizing their decaying marriage. It also ended with Morty’s excellent nihilistic speech to Summer, “Nobody exists on purpose, nobody belongs anywhere, everybody’s going to die, come watch TV.” That episode stands as one of the best Rick and Morty episodes ever.

By comparison, “Interdimensional Cable 2” doesn’t offer much outside of the bizarre randomness of series co-creator Justin Roiland riffing to create quick TV jokes from alternate realities. “It’s just the freedom to do shortform weird stuff,” Roiland explained to Entertainment Weekly in 2015 about the process of creating these episodes.

Even Roiland prefers their first foray into TV from other dimensions was way better.

“I feel like the first one was a lot better because I think it was a nice balance,” Roiland said. “There was more of a collaboration on the first one and the improv was plussed in a lot of ways. We went in and reworked certain stuff. Stuff that was great we left alone and stuff that needed work we went in and fucked with. On the second one, I kept it to myself for a lot of the process.”

Collaboration between Roiland and co-creator Dan Harmon seems essential for the series, and that might have been lacking somewhat in this second attempt.

Maybe that’s why they replace Interdimensional Cable with Morty’s Mind Blowers in Season 3. And who knows which of these two anthology-type episodes we’ll see in Season 4.

In “Tempting Fate,” at least we get the all-time greatest piece of interdimensional cable commercials in the form of “The Adventures of Stealy.”

Stealy is an absolute treasure, a deadpan creature with stretchy arms that steals common household objects and even people when they complain about it. Stealy ranks the various he’s stolen by an arbitrary about of “brapples.” Is it some kind of trash currency exclusively used by Stealy’s race? We will never know.

Does it make any sense? Absolutely not. But that’s what makes Interdimensional Cable so much fun. We also learn how a Plumbus gets made even if we still have no idea what it does. So maybe this episode was worth it after all.