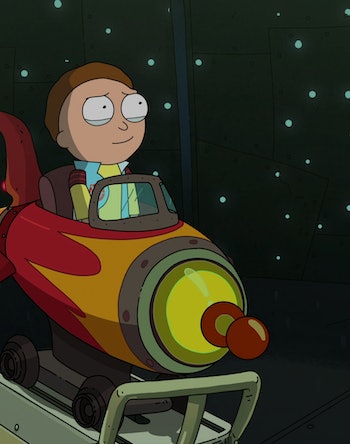 One of Rick and Morty Season 3’s most surprising adventures delivers a cutting parody of the superhero genre. It’s also one of only two episodes to pick up a TV-MA rating from the FCC thanks to an overwhelming number of F-bombs in what might be the series’ most gruesome episode ever. But despite all those superheroes and curse words (or perhaps because of them), “Vindicators 3: The Return of Worldender” also offers a cutting look at the nature of Morty and Rick’s relationship in a touching way.

Unlike most of Rick and Morty episodes, Season 3, Episode 4 is a singular story that follows the dynamic duo as they reconnect with a team of intergalactic superheroes called the Vindicators. Crafted as a blunt mockery of the Avengers, Guardians of the Galaxy, and Justice League all wrapped into one, the Vindicators give Rick Sanchez an opportunity to make fun of the superhero genre at large. Because every superhero’s story feels derivative when you think about it.

“Vindicators 3” is a Rick and Morty episode unlike any other. The lead-up makes it seem like we’ll get a pretty generic superhero team-up story, and the musical score supports this for the entire first half. But the end results are infinitely more terrifying.

While messing around in the garage with some alien worms, Rick and Morty get a “literal call to adventure” in the form of a Vindibeacon, a glowing purple crystal. Morty uses his Morty Adventure Card to force Rick into answering, and it’s revealed that they’ve teamed up with the Vindicators before. The team now needs help to take down a Thanos-type big bad called Worldender.

Within minutes, we learn that the Vindicators assembled without Rick and Morty the previous summer, leaving the duo out because of “personality conflicts” with Rick. After suffering some devastating losses last time around, they begrudgingly invite Rick back into the group.

Morty reads about this in bed and gets upset that, because of Rick, he’s been ostracized by this group of superheroes he idolizes. Therein lies the real conflict of the story between Morty and Rick. Whether he’s willing to admit it or not, Rick needs Morty’s love and admiration to validate his existence. He’s jealous of the Vindicators.

Rick constantly belittles these heroes’ redundant and predictable backstories because he’s arrogant and fancies himself a god amongst such caricatures, but this also comes from a place of deep insecurity. He’s devastated when Morty says, “They’re my heroes!”

"I never forget a kid!

Rick makes it clear that he wants to be Morty’s only hero when, instead of going out for “a drink,” he gets blackout drunk, single-handedly obliterates Worldender and his horde of minions, and constructs a series of deadly traps for the Vindicators. The next morning, we see him pantless, having defecated all over the Vindicators conference room — and the nightmare only starts there.

In this, Rick reveals himself to be the greatest villain in Rick and Morty history. So many Rick and Morty fans worship Rick Sanchez as some kind of brilliant sci-fi hero, but if ever there was an episode trying to change your opinions about Rick, it’s this one.

The Vindicators assemble to infiltrate Worldender’s lair and face a series of automated robotic defense systems, so we get a few solid action sequences as they use their various powers until things go sideways. Worldender is eviscerated and hung by a massive hook. “I sense the presence of a greater evil,” Million Ants says.

That “greater evil” is Rick’s drunk self from the night before, who traps them inside the lair and executes a series of Saw-inspired puzzles aimed at killing everyone. His real goal, dripping through his alcohol-soaked unconscious mind, is to undermine the heroism of the Vindicators and elevate himself in Morty’s esteem.

The first puzzle is a game show-style board with each Vindicator’s face on it and characterization labels like “tragic origin” and “never gives up,” all generic things you could apply to any hero. While Vance Maximus, Renegade Starsoldier is busy getting torn to shreds in an escape vent, Morty quickly figures out that Rick’s whole point was that all of these generic labels apply to all of them equally.

“It was a bit,” Morty explains. “All of the descriptors apply to all of you. Drunk Rick’s point is that none of you are very special or different.” That’s always Rick’s point, even when he’s sober.

As these puzzles increase in their complexity and the gore escalates, we eventually learn that in the “Vindicators 2” adventure against Doomnomitron (a shapeshifter inspired by Marvel’s Ultron), the Vindicators exterminated an entire planet just to defeat him. Rick can expose all of these heroes as generic and derivative, but this kind of real hypocrisy is far more legitimate.

Not only did they compromise their morals to beat their enemy, but when it’s only Alan Rails, Supernova, and Million Ants left, we learn that Supernova may have slept with Million Ants while she and Alan Rails were still married. Superheroes might seem so perfect and righteous in the movies, but on Rick and Morty, they’re just as morally bankrupt as some real people (The Boys on Amazon made a similar argument in 2019). Supernova even tries to kill Rick and Morty in the end.

“Everyone wants people they like to be right,” Rick says to Morty. “That’s why popular people are fucking dumb — and why your pretentious, poorly-written, high-budget friends back there can eat a double-decker shit sandwich.” (Maybe lines like this are what got this episode a TV-MA rating?)

The final puzzle requires that they put the one thing Rick values that the Vindicators have. Morty assumes this is nothing and that they’ll all die regardless. Hungover Rick sees a touching alternative: Maybe it’s Morty?

“Hey, I don’t know. I mean, look, when I get drunk, I get stupid and emotional and there’s no logic to it. it’s, like, possible I got so drunk, I felt like I was losing Morty to the Vindicators, and maybe this is my way of saying, “Okay, you can have him, but only if you know how important he is, otherwise I’ll kill you.”

We believe all this for about half a second — as does Morty with a smug look on his face — until it’s revealed that Drunk Rick built an elaborate theme park ride just for Noob Noob, the junior member of the Vindicators that laughed at his jokes earlier in the episode. Like the Season 3 premiere tantalizing us with a fake backstory about the death of Rick’s wife, this episode comes so close to admitting Rick’s love for Morty but then delivers a hilariously sad alternative instead.

The whole thing wraps up at a giant party Drunk Rick arranged, featuring an original rap performed by Logic all about Noob Noob.

Like many episodes from Rick and Morty Season 3, every aspect of the “Vindicators 3” production feels lightyears ahead of the previous two seasons. The sound and animation design created for each of these superheroes is engaging, as is the musical score that sounds like its copied right out of a Marvel Studios movie, but one of the funniest and most engaging parts is the way that Justin Roiland went full-on method acting for Drunk Rick.

When you hear Drunk Rick stammer through his awkward lines like a real drunk person, you’re hearing a very drunk Justin Roiland riffing on the pre-written lines.

“This is by far the least productive and messiest record day we’ve ever had,” associate producer Sydney Ryan says in a behind-the-scenes video chronicling the experience. Roiland has performed the voices for Rick and Morty since the beginning of the series, so that includes the varying levels of Rick’s drunkenness we’ve seen before. For “Vindicators 3,” he took things up a notch by having four tequila shots to begin the recording session.

It adds a certain amount of authenticity to the whole thing story that elevates it a bit beyond your typical episode. And because it’s a singular story that doesn’t cut away to any B-Plots, the pacing feels even better than your usual great episode of Rick and Morty.

Is Drunk Rick truly the villain in this story? Some might argue he’s better than the Vindicators because at least he’s no hypocrite. He’s brutally honest with his opinions, and even when his blackout hijinks lead to a series of horrible deaths, at least he’s a more complicated and fascinating character. Maybe the Vindicators are the real villains, and that’s the entire point?

Watch “Vindicators 3: The Return of Worldender” on Hulu.

If you enjoyed Justin Roiland’s drunk method acting, here’s even more footage from the recording sessions: