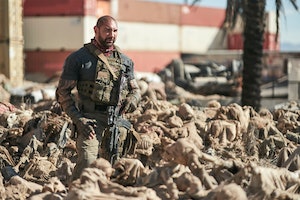 Netflix May 2021: 11 astonishing sci-fi shows and movies you can't miss

The undead truly never die, and the onslaught of zombie hordes hitting Netflix this May is (un)living proof of that. It’s the first time zombies have infected Netflix this much since September 2020!

You could watch The Walking Dead, Daybreak, Black Summer, or a litany of other zombie shows and movies — or you could instead follow our carefully curated list that also incorporates a mix of the most important bits of science fiction this month.

If you find yourself hungering for a taste of tomorrow this May, sink your teeth into these 11 science fiction shows and movies, with special attention given to some options that explore post-apocalyptic fiction and zombies. However, it’s not all flesh-eating ghouls! We’ll always focus on what’s new, original, or leaving Netflix soon.

11. The Mitchells vs. The Machines

From producers Phil Lord and Chris Miller (a.k.a, the guys behind Spider-Man: Into the Spider-Verse) and first-time movie director Mike Rianda, The Mitchells vs. the Machines (formerly titled Connected) is the story of a dysfunctional family who comes together to save humanity from a robot apocalypse.

Full of comedy, action, and an incredible cast (Maya Rudolph, Danny McBride, and Abbi Jacobson, to name just a few), this new movie from Sony Animation takes the innovative technology used in Spider-Verse and pushes it in weird new directions.

“We took all those tools on Spider-Verse and just like bent them,” Rianda tells Inverse. The result is a stunning new animated film where every frame looks like a painting. The Mitchells vs. the Machines will make you laugh, gasp, and maybe even cry as you watch this ridiculous family come together to save the world from a Siri knockoff gone rogue.

The Mitchells vs. the Machines was released on Netflix on March 30, 2021.

Remember that absolutely terrifying 2010 movie called Buried where somebody buries Ryan Reyolds alive in a coffin and he just spends 90 minutes sort of panicking with limited resources? Imagine that, but instead, it’s a woman who wakes up from cryogenic stasis with no memory of how she got there.

This French survival thriller is directed by Alexandre Aja and stars Mélanie Laurent as an amnesiac woman who has to piece together her memories with the aid of an AI called MILO before she runs out of — you guessed it — oxygen. MILO won’t comply with her request to unlock the cryo pod, but he will give her access to some kind of internet so she can uncover her past and unlock the memories she may need to get herself out of this predicament. (This one comes with a claustrophobia trigger warning.)

Great Scott! Did you know the most important time travel franchise of all time is back on Netflix? All three Back to the Future movies are cultural touchstones that even get namedropped in Avengers: Endgame.

In these films, teenager Marty McFly (Michael J. Fox) is best friends with a disgraced nuclear physicist Dr. Emmett "Doc" Brown (Christopher Lloyd) who transforms a DeLorean automobile into a time machine. Marty has to navigate high school with his parents in the first film after he goes back in time. In the second, he and Doc wind up in the future for other hijinks. Then the third film brings them back to 1885 for a steampunk adventure.

Back to the Future is basically just a series of lighthearted romps that never takes itself too seriously, but the lovable dynamics between these ridiculous characters is always fun.

Now let's sink our teeth into the meat of Netflix’s new and everlasting sci-fi this May: zombies.

Unfortunately, the most important zombie movie this month won’t arrive until May 21, but if you’re fresh off watching Zac Snyder’s The Justice League, get ready for Zac Snyder’s Army of the Dead. In this big-budget zombie heist, Las Vegas has been decimated and quarantined following a zombie outbreak. Dave Bautista's Scott Ward leads a group of mercenaries on a mission to steal a bunch of money.

Snyder directed 2004’s Dawn of the Dead, in which a motley crew find themselves trapped in a mall following a zombie outbreak. Army looks to be much more bombastic and action-forward — for better or for worse.

From the director of Venom and the writers of Deadpool (long before they made mature but silly superhero movies), the original Zombieland is the pinnacle of zombie horror satire, celebrating the ridiculous, gratuitous violence and gore that entertains and frightening. Four strangers in the zombie apocalypse travel the wasteland of the United States in search of salvation, but what they find instead is an unlikely family.

Jesse Eisenberg, Woody Harrelson, Emma Stone, and Abigail Breslin all deliver solid performances as this ragtag group of survivors — and an extended Bill Murray cameo is a total delight. The sequel Zombieland: Double Tap was released in October 2019, but the original is far better.

Zombie films in the early 2000s were at their best when they blended horror with black comedy, and while Shaun of the Dead might be the pinnacle of that, Zombieland is the best American entry in this delightful subgenre.

Zombieland arrived on Netflix as of April 1, 2021.

Let’s make one thing abundantly clear: These movies are bad!

Director Paul W.S. Anderson found success with the 1994 Mortal Kombat movie, and this self-proclaimed video game junkie somehow got to be in charge of a punishing series of popcorn films based on the Resident Evil video games. The action is solid, albeit ridiculous, and if you love devouring zombie movies, they’re absolutely essential viewing.

By the time Extinction rolls around, the apocalypse has come and gone. Milla Jovovich’s Alice persists as a series of clones trying to get revenge on the Umbrella Corporation and maybe fix the world. That saga continues into Afterlife and beyond.

The timing here is interesting: Resident Evil Village — the eighth mainline game in the franchise — will be released on May 7. Netflix also has a live-action series and an animated series that functions as a follow-up to Resident Evil 4. There’s also a cinematic reboot in the works as well. So there’s never been a better time to sink your teeth into this franchise.

Resident Evil: Afterlife and Extinction stumble onto Netflix on May 1, 2021.

Going along with this month’s impromptu zombie theme, among the best zombie shows on Netflix is The CW’s iZombie.

The series finale might have premiered over a year ago, but this story of an ambitious med student-turned-zombie-turned-detective is worth settling back into from the beginning. Co-creator Rob Thomas takes the best parts of Veronica Mars (neo-noir satire mixed with whip-smart dialogue and a cast of fresh faces) and adds a playful sci-fi twist to this undead version of Seattle.

Based on the DC comic book series by writer Chris Roberson and artist Michael Allred, after a boating party gone wrong leaves Liv Moore (Rose McIver) with a job in the morgue and a penchant for brain food, she makes an unexpected, if not unsettling, discovery: She can absorb the memories of the dead people’s brains she eats to survive.

iZombie is sardonic at its best and painfully aware of present-day society, taking comedic jabs whenever the opportunity arises. But where the series really shines is in the dynamic detective duo that is Liv and Clive (Malcolm Goodwin), solving crimes like a modern Sherlock and Watson. If that isn’t enough to convince you, maybe the 90 percent rating on Rotten Tomatoes will.

There's a lot more to Kingdom — a South Korean political thriller set during the Joseon Dynasty circa 1392 — than the undead. Crown Prince Lee Chang must not only protect his people from a zombie outbreak, but also protect his family's claim to the throne. There's political intrigue, power plays, betrayals ... and lots of zombies. The rich history it pulls from accentuates a gripping zombie tale where, obviously, nobody has access to more modern weaponry to help.

It resembles Game of Thrones in some great ways: There’s an ailing king, a powerful and more importantly power-hungry dynasty, a pregnant and conniving Queen, a smart friend who finds the crucial information about a mysterious disease in a book. More plainly, it’s a lot of fun.

This animated sci-fi anthology series from Deadpool director Tim Miller is part of an exciting collaboration with David Fincher. Episodes vary between five and 15 minutes and use different animation styles to tell stories within the realms of sci-fi, fantasy, horror, and comedy.

In one episode, three robots go sightseeing in a post-apocalyptic city long after humanity is gone. In another, Hitler dies in various ways across several alternate realities. Yet another — called “The Secret War” — is basically a zombie apocalypse (more zombies!) The series is wildly entertaining and a visual spectacle, although a few episodes feel incredibly regressive.

More than two full years after the first season premiered in March 2021, Season 2 is finally coming to Netflix. So there’s never been a better time to start.

In the crowded arena of cerebral animation made for a more mature audience — think Rick and Morty and Adventure Time — Netflix’s Midnight Gospel is an absolute revelation. Its release on April 20, 2020 is an obvious nod to the stoner following shows like this tend to accrue, but its experimental nature makes it so much more than that.

Set in a vibrant, far-out future where “spacecasters” have replaced podcasters, The Midnight Gospel chronicles the adventures and interviews conducted by Clancy Gilroy, a pink dude in a wizard hat. Using a malfunctioning universe simulator, Clancy travels through various alien worlds to interview guests for his show. Virtually all of the dialogue comes from series creator Duncan Trussell and real-life interviews conducted on The Duncan Trussell Family Hour podcast with mystics, gurus, and other religious leaders. Topics range from drugs and spirituality to the nature of the multiverse — and one of the best early episodes showcases a zombie apocalypse.

The Midnight Gospel juxtaposes these deep conversations with vibrant animated worlds, brain-melting sci-fi concepts, and even a compelling overarching narrative for Clancy that makes the entire series essential viewing.

Jupiter’s Legacy is a gritty live-action superhero drama that follows the struggles of superpowered children trying to live up to the legacy of their parents, the world’s first heroes who acquired their powers in the 1930s. So the timing of its arrival on Netflix is uncanny when Amazon began airing Invincible in March, an animated series with almost the exact same premise with an art style similar to the iconic Justice League series.

Based on a 2013 comic book series written by Mark Millar and drawn by Frank Quitely, Jupiter’s Legacy was adapted for Netflix by Steven S. DeKnight. He’s got a proven track record with the streaming service, having served as the showrunner on Daredevil Season 1. Before that, he wrote, directed, and/or produced on Spartacus, Smallville, Dollhouse, Angel, and Buffy the Vampire Slayer. He also wrote and directed Pacific Rim: Uprising which, while not as good as the first film, was an adequate sequel.

It’s clear, however, that he has a strong grasp on what it takes to juggle a wide cast of interesting characters experiencing the supernatural. What more do you need here?

Jupiter’s Legacy debuts May 7 on Netflix.

More like this
Science
Feb. 4, 2023
The Weirdest Sci-Fi Apocalypse on Netflix Reveals a Controversial Field of Medicine
By Tara Yarlagadda
Science
Jan. 28, 2023
The best mystery thriller on Netflix ignores a basic fact about hydrogen energy
By Tara Yarlagadda
Entertainment
Jan. 23, 2023
The Pod Generation is soft sci-fi satire with too light a touch
By Isaac Feldberg
LEARN SOMETHING NEW EVERY DAY.
Related Tags
Share: