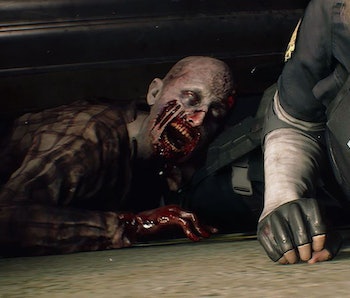 On August 27, 2020, the streaming platform announced that the scripted live-action series was in active development, helmed by Supernatural executive producer and co-showrunner Andrew Dabb.

"Resident Evil is my favorite game of all time," Dabb said in an official statement. "I'm incredibly excited to tell a new chapter in this amazing story and bring the first-ever Resident Evil series to Netflix members around the world. For every type of Resident Evil fan, including those joining us for the first time, the series will be complete with a lot of old friends, and some things (bloodthirsty, insane things) people have never seen before."

Deadline had originally reported on the show's development in January 2019, but this is the first official confirmation that the series exists. How will this new story relate to the games and movies? What else can we expect from the series? Here's everything we know.

When will the Resident Evil series premiere on Netflix?

One leak reported by the Redanian Intelligence blog in February 2020 claimed that production was initially slated to run from June to October 2020, which could have meant it would have come out by summer 2021. However, the original timeline was delayed because of the extended hunt for a showrunner and extenuating circumstances due to COVID-19.

According to ProductionWeekly, Resident Evil started filming in September 2021 and is expected to finish in December. That being said, considering how many effects will be used for the series, who knows how quick of a turnaround it will be until the show premieres. Hopefully, Resident Evil will come alive in 2022.

What is the Resident Evil Netflix series story about?

The series will tell a brand new story within the overarching Resident Evil canon taking place across two timelines in eight one-hour episodes. It'll focus on the two daughters of Dr. Albert Wesker, the brilliant virologist credited as a senior researcher of the T-Virus responsible for transforming most of the world into zombies. A prototype virus actually gave him superhuman physiology, and he became one of the franchise's chief villains, going on to work with black market groups. Little is known about his personal history, so the TV series will seemingly change all that, at least tangentially.

"In the first timeline, 14-year-old sisters Jade and Billie Wesker are moved to New Raccoon City," the official synopsis from Netflix reads. "A manufactured, corporate town, forced on them right as adolescence is in full swing. But the more time they spend there, the more they come to realize that the town is more than it seems, and their father may be concealing dark secrets. Secrets that could destroy the world."

The second timeline is an expected one: "Well over a decade into the future: there are less than 15 million people left on Earth," it reads. "And more than six billion monsters — people and animals infected with the T-virus. Jade, now 30, struggles to survive in this New World, while the secrets from her past — about her sister, her father, and herself — continue to haunt her."

It's unclear whether Jade and Billie are twins. (They probably are?) It's also unclear what happened to Billie in the past that she's seemingly no longer part of the future timeline. Given what we know about Albert's experimentation with prototype strain, it's possible that he experimented on both of her daughters?

This is pure speculation, but perhaps Jade survives thanks to superpowers similar to her father, but Billie has been mutated into some horrible monstrosity. (These things do happen rather often in Resident Evil stories.) No matter what unfolds throughout the series, it seems like each episode might tell stories using both timelines in tandem.

The official details do corroborate Deadline's initial summary that the show "will explore the dark inner workings of the Umbrella Corporation and the new world order caused by the outbreak of the T-virus."

Is there a trailer for Netflix's Resident Evil?

Given the rumored shooting timeline, a trailer probably won't be on the horizon until shooting wraps up in December.

Who is starring in the Resident Evil Netflix series?

We got a look at the cast of Resident Evil courtesy of actor Lance Reddick, who tweeted a picture in June while also announcing he'd be playing the role of Albert Wesker.

The other cast members (and their lightly-announced roles) are:

Who is making the Resident Evil Netflix series?

The series is being produced by Constantin Film, the German production and distribution company behind the Resident Evil movies. While this may be a cause of concern for some, considering the fact that each of the six blockbuster films is rated at 37 percent or below on Rotten Tomatoes, there's every reason to hope that Netflix may actually get it right.

Deadline originally reported that Constantin and Netflix were searching for a showrunner as of January 2019, and they seemingly took their time to find the right fit. Supernatural resumed production on its final season in August 2020, so Andrew Dabb will seemingly pivot right over to executive-producing the Resident Evil series next. Say what you will about the quality of The CW's pulpy horror series, but it's been immensely popular in the 15 years it has been running. This is to say that this could be a smashing success with an enthusiastic Dabb at the helm.

Bronwen Hughes (The Walking Dead, The Journey Is The Destination) is also slated to direct and executive-produce the first two episodes. From Constantin Film, Robert Kulzer and Oliver Berben (who both worked on Shadowhunters) will serve as EPs alongside Dabb and Mary Leah Sutton (Tell Me a Story). Constantin Film's CEO, Martin Moszkowicz, will also serve as a producer.

Don't expect Paul W. S. Anderson to return to the franchise, however. He previously told Inverse: "I feel like I've done everything I wanted to do with Resident Evil, so I'm excited to move on and do something else." That something else? Monster Hunter, another video game film adaptation produced by Constantin.

This article was originally published on Feb. 4, 2020