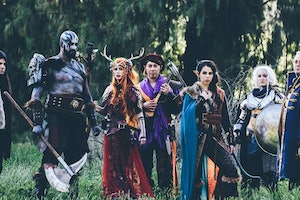 TV shows for those who love a deep dive

Commitment is difficult. What if life gets in the way? What if you get bored? All these trepidations may have swayed you from jumping into a gigantic, multi-season binge. However, now there's nothing but time as we all social distance and self-isolate, so why not take the plunge and avoid that dreaded end-of-season feeling. Don't know where to start? Here's eight marathon watches for you to consume now, when we need the distraction more than ever.

It's hard to remember a time when Supernatural wasn't on air. Since 2005, this CW show has followed the adventures of Dean and Sam Winchester as they take up their father's monster-hunting mantle. It combines monster-of-the-week episodes with overarching plots, and over 15 seasons the brothers have encountered everything from a ghost possessing Paris Hilton to God himself.

While Supernatural is currently airing its last season, there's a possibility the finale won't be as satisfying as fans hoped: coronavirus delays could push the final episode indefinitely, or it may just not happen at all. Even if it doesn't, it's an exhilarating watch full of heart and some gorgeous fantasy twists and turns.

Some would argue The Walking Dead is a bad show to watch at the moment. A case could be made it's the worst possible show to watch. But if you prefer to lean into worst-case scenarios, you can't go wrong. The Walking Dead has become the quintessential zombie show, and has the runtime to prove it. While characters may come and go, the undead threat remains. Even though it's a television show, not a movie, the creature effects and special effects makeup are world-class, and the gore is squirm-inducing.

The Walking Dead Season 10's production is currently paused just like Supernatural, but its first nine seasons are available to stream. AMC has already renewed it for its eleventh season, so there's plenty to watch and more to come.

You can't talk about dauntingly long television shows without talking about One Piece. With more than 900 episodes, 20 seasons, and 14 movies, it's an institution of the anime scene. Don't be too intimidated, though, the show is easily divided into a series of arcs within different sagas. Consider it like Star Wars: The Clone Wars, if it were eight times longer.

The plot is far too complex to describe, but the premise is relatively simple: a boy named Luffy desires the ultimate pirate treasure known as One Piece, and seeks to find it alongside his ragtag group of pals who become known as the Straw Hat Pirates. It's outrageous, it's fun, it's everything you could want in a long binge.

The X-Files is monster-of-the-week for grownups. Grounded in realism, The X-Files combined unlikely partners tropes with fantastical, extra-terrestrial storylines. There's a reason it's the longest-running U.S. science-fiction show. The character dynamic between Fox Mulder and Dana Scully is one of its greatest assets, and it's played into a series-long "will they or won't they" tension that would make Sam and Diane from Cheers jealous.

Nine seasons seem a little too daunting? The ninth season varies from the norm and turns into a conspiracy thriller, so it's easily omitted. Watched all nine and still want more? Luckily enough, the show was revived in 2016 for two short seasons, so you can get a final sweet taste of Mulder and Scully's adventures.

Sometimes, you don't even need action to make a thrilling and gripping binge watch. All you need is a table, eight friends, and an ungodly amount of storytelling talent. That's the formula behind Critical Role, a Twitch live-streamed Dungeons and Dragons game. It's just like any other Dungeons and Dragons game, with one gigantic twist: all of the people involved are voice actors, working on everything from DuckTales to The Last of Us. Matthew Mercer (Overwatch's McCree) acts as DM and pulls all manner of characters seemingly from nowhere as an epic journey is detailed over a four-hour episode.

That hefty episode length is daunting, but there's a perfect starting place in the middle: halfway through, a new campaign started, featuring all-new characters and storylines. It's only just now nearing 100 episodes, which is.... still longer than all the previous shows on this list. Still too long? Well, they're developing two seasons of an animated series for Prime, detailing the adventures of their first campaign. Saying it's highly anticipated would be an understatement: it broke the record for biggest first day in Kickstarter history.

Before there was the Arrowverse, there was just Arrow. This superhero show paved the way for the DC Television universe we know today, with shows like Supergirl, Batwoman, and Legends of Tomorrow following in its path. While it ended earlier this year, it still remains a fresh and new watch and delivers on every front of "gritty superhero TV show."

If you really want to go whole-hog with the binge, the entire Arrowverse is available to stream. The ending of Arrowverse coincided with the massive cross-over event Crisis on Infinite Earths, so in order to grasp the whole magnitude, you may want to just mainline CW shows for the forseeable future. After all, there's no better time to bask in the abundance of superheroes protecting us from harm.

Although Arrow created the blueprint for CW superhero shows, the blueprint for all CW shows is ultimately due to the success of Buffy the Vampire Slayer. An all-time monster-of-the-week show, Buffy combined teen drama with action and supernatural thrills in a way that still captivates. Plus, due to the early 2000s fashions, the costuming ranges from absurd to laughably nostalgic. While largely episodic, when Buffy establishes an overarching plot, it always pays off.

Do be warned, however, that Buffy was never a show to shy away from a gimmick. From "Once More With Feeling," the polarizing musical episode, to the near-silent "Hush," showrunner Joss Whedon always made sure no matter how grim the show got, it never took itself too seriously.

Dark Shadows is a soap opera. There's no getting around that. It's also a genuinely gripping supernatural semi-serialized story, with large chunks of episodes telling tales of the creepy and supernatural, usually inspired by classic literature. It's best known for a character who wasn't even introduced until the seventh storyline, more than 200 episodes into its run: the vampire Barnabas Collins. Luckily enough, it's only the episodes past this point that are available to stream.

While most of its earlier storylines are great, the most complex and interesting adventures occur during seasons 13-17, when the series flashes back to Barnabas's history in the 19th century. Like most soap operas, it's meant for viewers to jump in anywhere, so it's the perfect stream for those still a bit hesitant to commit.

More like this
Gaming
Jan. 18, 2023
NieR anime Episode 2 takes bigger risks than The Last of Us premiere
By Willa Rowe
Entertainment
Jan. 30, 2023
Doctor Who Could Become the New Marvel — But There's a Catch
By Ryan Britt
Entertainment
Jan. 30, 2023
How The Last of Us Episode 3 Foreshadows One Heartbreaking Future Twist
By Alex Welch
LEARN SOMETHING NEW EVERY DAY.
Related Tags
Share: